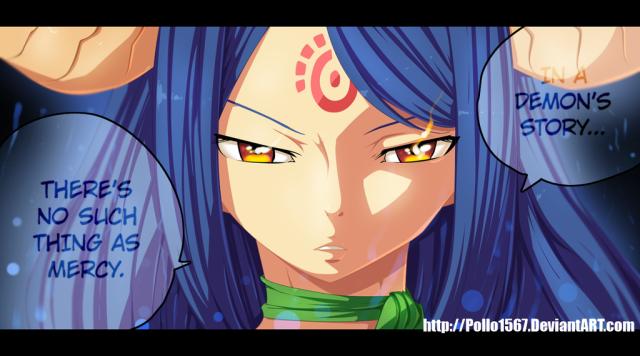 So that is what Tartarus is after hunting down these former Magic Council members, to seize control over one of the magic weapons developed by them – Face, and to prevent any other magic weapon from being activated. Face would effectively allow Tartarus to render all magic on the continent useless and open the door for them to seize control over the surface world with their curses. It is a cunning plan, but unfortunately for them, they went and chose the continent with Fairy Tail on.

Natsu vs Jackal, I’m glad the match-up was resumed shortly after the initial round ended. Seeing Jackal become increasingly shaken and terrified of Natsu’s brazenness and abnormality was quite amusing, even if Natsu attempting to eat the explosion just as it blew seemed a tad silly. Still with Natsu’s toughened body and the fact that he is a Fire Dragon Slayer, he is probably the only person who could combat Jackal in such a manner. While it did dull Jackal’s luster of being a Tartarus member and a demon, it didn’t take away from the fact that he wields an incredibly powerful curse and was matched up against a bad opponent for him. Given that he will be revived and that the Natsu vs Jackal round 3 is inevitable, I am curious to see what the two do before engaging each other. How will they approach their next encounter?

Michello, what a selfish old man, I understand that he is important, but him screaming from the top of his lungs about how “valuable” he is made me lose any love I had for his character. The fact that he abandoned his granddaughter and ran away alone serves to indicate just how much of a dislikable character he is. Were people like this seriously running the Magic Council which governs all mages? A starving stray dog would display more honor and generosity then people like Michello – I’m glad Natsu knocked Michello out before his battle with Jackal. Well regardless, thankfully, Michello spilled the beans about what Tartarus could potentially be after once Jackal was defeated. Another thing though, where is Michelia? She doesn’t seem all that important as a character, but I have a weird and suspicious feeling about her.

It is interesting to learn that Tartarus and demons in general wield curses rather than magic. Ah the world of Fairy Tail continues to expand, how exciting. I am curious about other types of powers which people could be wielding around the world in Fairy Tail – Blessings? Natural/wild energy? Spiritual/elemental power? The fact that magic isn’t the only source of power is extremely exciting, although it was a possibility before when Dragon Slayer Magic didn’t necessarily seem your usual type of magic. Taking into account the “treasures” which were recently revealed to also have an impact in the world, a lot of new elements have come into play concerning power sources a person can wield. It will be interesting to learn how Magic and Curses are connected, did they both branch out from the initial dark source, The One Magic? Or are curses an entirely separate phenomenon? Ah very much looking forward to having curses explored through the Tartarus Kyuukimon (Nine Demon Gates) members. Curses are powerful, but the real threat behind curses lies in whether they can affect the person or not. 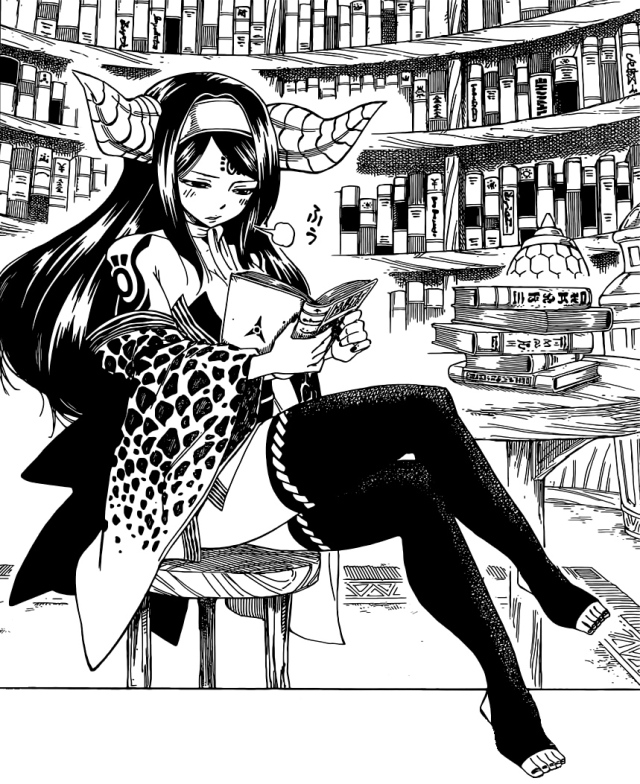 Using macros to script a tale, how will the story turn out?

The next Fairy Tail vs Tartarus match-up between Lisanna/Elfman against Sayla seems incredibly interesting. Sayla appears to have the ability to force a person to act according to her will through macros she scripts. She is not exactly a puppeteer; rather than controlling their body, she controls what they decide to do – she is more a programmer/scripter/writer creating a script for her victim to follow. The way she references stories, talks about spinning her own tales and expresses “in a demon’s story, there is no such thing as mercy” indicates quite strongly that her curse forces her target to follow the script she has set-up. Whether Sayla is limited to executing one script or several for multiple opponents is yet to be revealed, but it is going to be exciting to learn the limits of her curse. 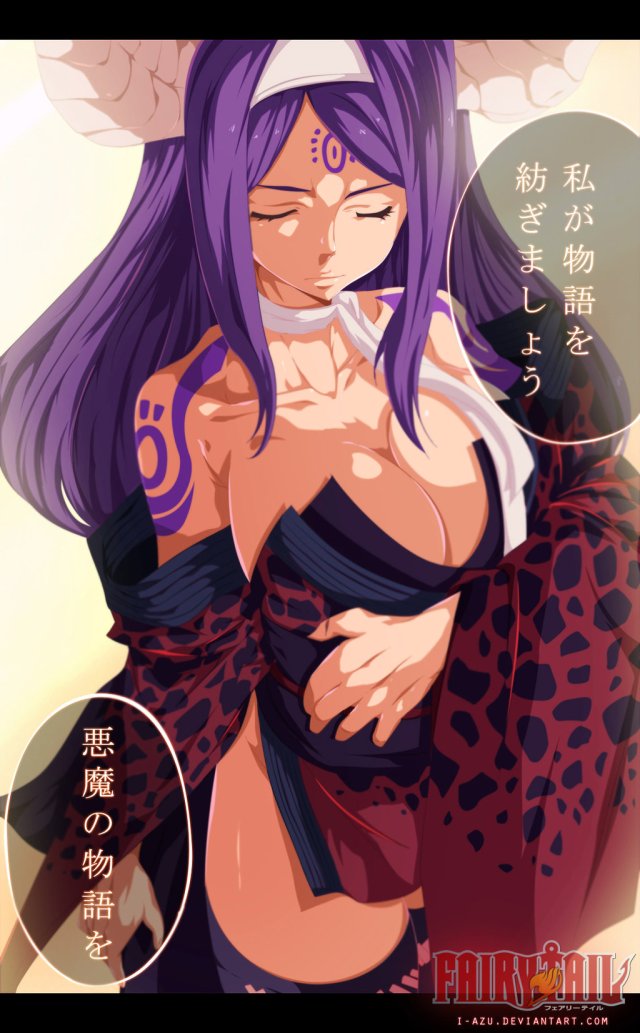 What kind of tale is fit for a demon? – colour by i-azu

Lisanna and Elfman both have the ability to use Take Over Magic, which I believe will become a crucial factor in their battle against Sayla. Sayla is able to force targets to follow her scripts through her macros, but what happens when details in the macros are modified, such as the form of the target(s)? It is likely that the macro will lose its effect and require modifications of its own to refresh its effect on the target(s). With Take Over, Lisanna and Elfman are able to change the form they hold, through Animal Soul and Beast Soul respectively. If Sayla’s curses really functions by needing the factors within its macros to remain constant, then Lisanna and Elfman’s ability to skew such details opens a path for the two to defeating her. The key factor would be in the number of varied forms Lisanna and Elfman have at their disposal to keep breaking free from Sayla’s macros. Very much looking forward to seeing this demon who enjoys writing tales unleash.

So the Magic Pulse Bomb, Face, a weapon capable of nullifying all magic across the continent, is sealed by an organic link magic powered by three of the former Magic Council members. Furthermore only the former chairman knows the identity of those three mages. Given that once those three mages are dead, the organic magic link seal will be broken, it is expected that Fairy Tail would send their best to protect the former Magic Council chairman, but my goodness, Erza AND Mirajane!! This arc just got REAL, I feel so sorry for Tartarus now.

Mirajane is able to use Satan Soul Take Over which allows her to take over a demon form, given that Fairy Tail is up against demons and that Mirajane understands demons well (she had a personality of a demon is the past =P), she could very well be the factor which crushes Tartarus. I would also love to see the demons of Tartarus go against a real demon, Mirajane will show them how you go about destroying a whole town! With Erza in the mix, hope seems a strained thing for Tartarus, but they do have Demon Minerva up their sleeves, so it should be interesting to see if Minerva is ready to head again to face Erza in her new form. It does suck that Minerva is totally being used by Tartarus, but lets hope the hatred she bears for Erza and Fairy Tail pierces any mental changes the demon transformation may have had and reminds her of what she is really after – not to be a servant to someone but to have others serve her. 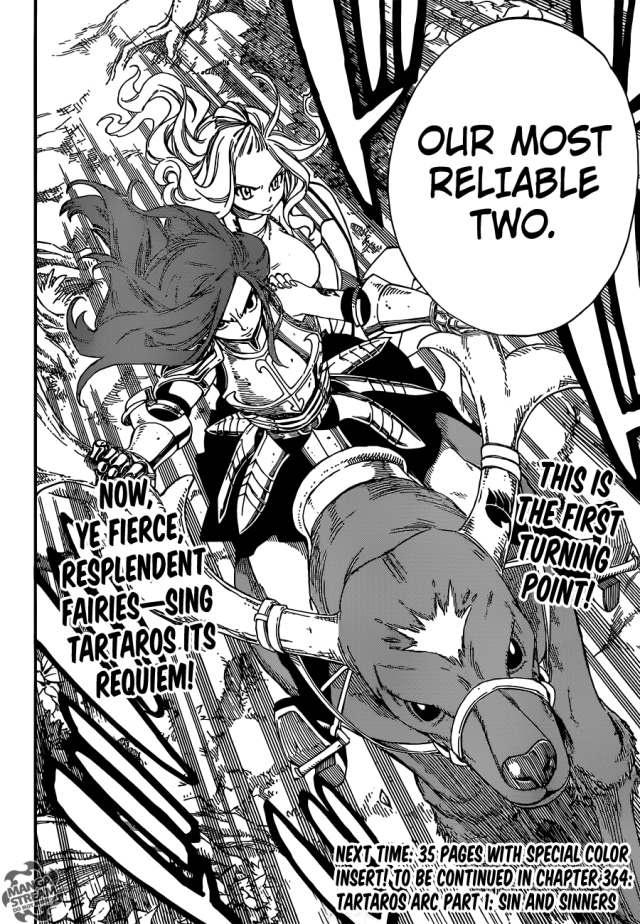 The ultimate combo, how will Tartarus respond?

With all the 16 former council members located, I wonder if anyone will head for Ultear or Jellal. It is likely that Gray will head for Ultear now, but with Erza heading for the former Magic Council chairman, I wonder what will happen with Jellal. Will he too notice something is amiss and head for the former chairman as well? I wouldn’t put it past Jellal, he is an incredibly smart and perceptive man. Intently looking forward to the next chapter.