What a 41 minutes this is going to be

Everything has become a lot more tense and exciting now with a timer being placed on Face’s activation. Within these 41 minutes until Face activates and all magic onn the continent is rendered null, can Fairy Tail defeat the Tartarus members opposing them and stop Face from activating? And will Jellal, Meredy and Oración Seis have a further role within this arc? Beyond the developments of Face though, who is this E.N.D. Zeref mentioned, the greatest demon “book” of he created? Why couldn’t Igneel kill him and why will Natsu be faced by such an extreme choice when encountering E.N.D.? Whatever happens within these 41 minutes and after, it feels like something significant is going to be changed.

It is very intriguing why Zeref has such an interest in Natsu, going out of his way to meet him and talk with him. Why is that? Why is Zeref so concerned about Natsu and the moment in which they may meet in the near future? From the talk Zeref has with Natsu, I got the impression that Zeref has not made himself proximate to the Tartarus members at all. The reason Tartarus are trying so hard to erase magic from the continent and usher in a demon age is because they want to meet Zeref. This further emphasises the mystery behind Zeref’s interest in Natsu. If Zeref, whom the demons he creates are desperate to meet, goes out of his way to meet Natsu, it begs the question, who is Natsu to him? Why would he see someone like Natsu and not one of his loyal followers he created? 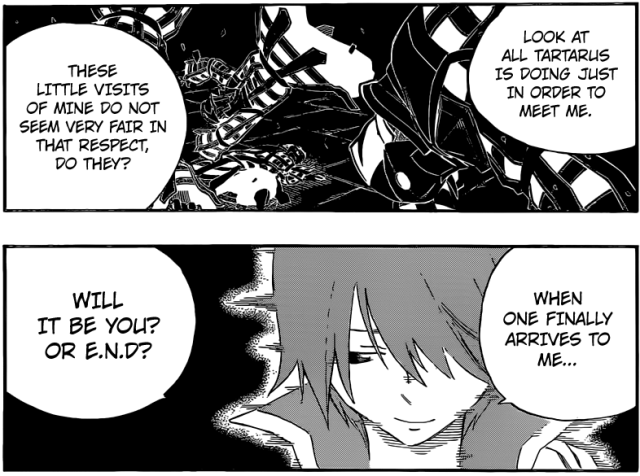 The relationship Zeref and Natsu share really is a curious one

E.N.D. in particular seems desperate to meet Zeref, illustrated by how he created Tartarus and engaged the operation to breakdown the seals of Face and activate it. E.N.D. being talked about on the level as Natsu has me curious who E.N.D. actually is and why Mashima-sensei has decided to align Natsu and E.N.D. in a similar situation that will effectively decide who meets Zeref. Why couldn’t Igneel stop E.N.D. and why will the choice of life or death be poised at Natsu when he encounters E.N.D.? I really can’t help but feel there some close connection between Natsu and E.N.D =/.

Erza vs Kyouka, so the fight continues! I was hoping Kyouka would get up and go on the offensive, which is exactly what she did. Now that Kyouka is aware that Erza is a serious danger, she seems to be giving Erza her full attention and focus. The attitude shift in Kyouka from somewhat unconcerned towards Erza to now completely responsive is quite the exciting development. 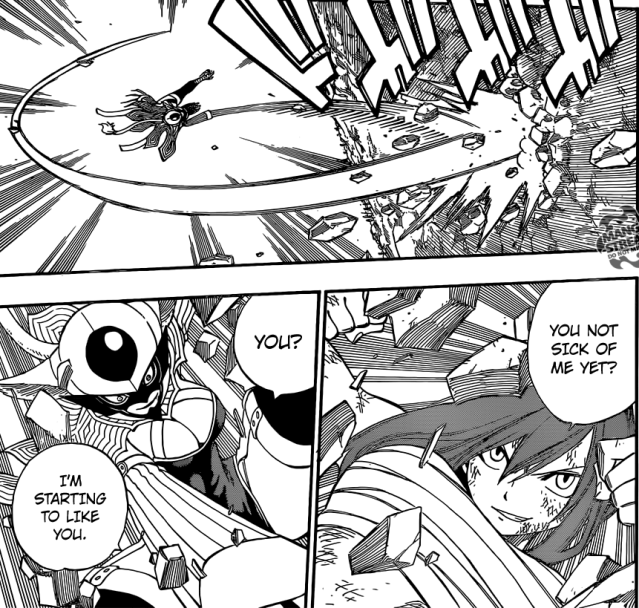 Now that Erza has Kyouka’s attention, this should be interesting battle

I really do love how those who encounter Erza are left somewhat emotionally “affected”, be it directly through their dialog or indirectly through their reactions, I find the way they understand, acknowledge and in their own way admire the strength and conviction Erza has to contribute towards a level of development those characters have (Erza Knightwalker, Azuma, Kagura, Minerva, and now Kyouka).

I am interested to see how Minerva is going to fit into all of this, especially with Kyouka now so motivated to see her fight with Erza through. Will Kyouka and Minerva team up against Erza? Or will there be a three-way fight, with Minerva disobeying her allegiance to Tartarus in favour of crushing Erza and anyone who gets in her way. And will this potential battle Minerva will be involved in be an eye-opener for her? Minerva is currently looking at the world in an extremely narrow-minded view, the perspective her father, Jiemma, forced upon her. The future developments concerning Minerva’s character is something I am extremely looking forward to as Minerva is a character I have taken a genuine interest in.

Sayla vs Mirajane, hahah wow, what a great match-up. Sayla pissed at Elfman for embarrassing her plan of destroying Fairy Tail and now directing all that anger towards taking control of Lisanna. Mirajane obviously wouldn’t take that lying down, but the almost sadistic reaction she gave Sayla sent shivers down my spine. Has a bit of the Mirajane from the past resurfaced in the current Mirajane? However things go down, this is going to be one exciting battle.

Lucy, Wendy, Carla and Happy encountering Keith was an exciting development, how will they go about combating an enemy they currently have no idea about. Seeing the four of them learn about Keith’s abilities through the battle should be entertaining, as well as how Wendy and Lucy work together to find a way to counter him. Also, is Keith really a skeleton? What? Cool design though I must say.

Franmalth’s mention of the errors in his calculation being more off regarding Face’s location than he expected was interesting, what is Mashima-sensei hinting at with this? Did someone really move Face? Is there really a mysterious third party involved in this whole Face development? I don’t think it is Crime Sorcière, it almost feels like Mashima-sensei is building up towards a massive reveal with this subtle hinting.

Franmalth also mentioned Ezel, so that four-armed tentacled-legged Kyuukimon demon went ahead to activate Face? How interesting, who exactly will he be matched up against? Will that oddity in Face’s location being significantly different than what Franmalth expected play a part in Ezel’s presence there? Or will Mashima-sensei match Ezel up with Gajeel or Crime Sorcière? Should be interesting to see who the remaining Kyuukimon members are matched up against – Silver, Torafusa, Jackal, Tempesta. Looking forward to the next chapter.