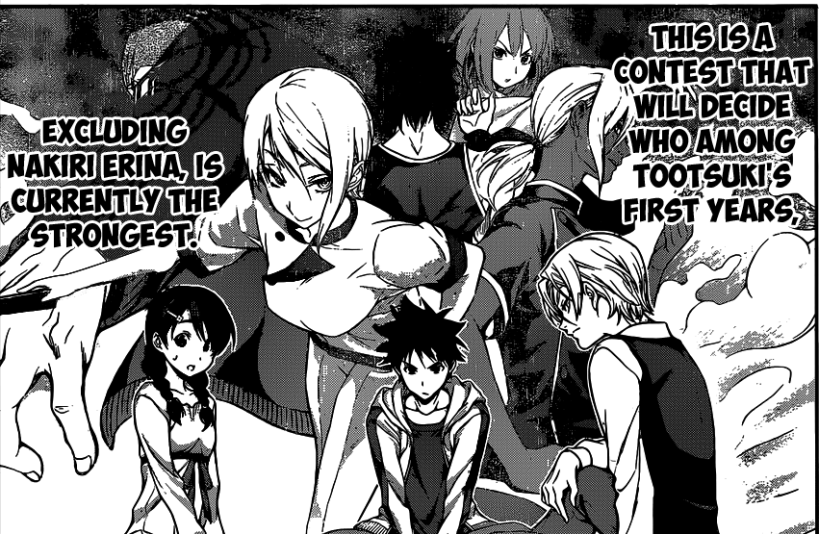 You have to admire how Souma dives head-first into the world of cooking hungry to learn as much as he can and experience as much of the cuisine styles he becomes aware of. What Souma achieved in a month with his use of spices for the Autumn Election preliminaries was incredible, but he still feels the burning desire to want to push himself even more, and because of that it becomes apparent why Souma is such a talented cook, because he is always open to pushing himself and wanting to learn more. It is that passion coupled with his ability to blend the different cuisine styles he learns together so magnificently which makes Souma such a skilled and amazing chef.

It is nice to see how the characters whom didn’t make it through the Autumn Election Preliminaries reacted to the reality of that after they tried so hard and gave their all in their cooking. It is a given that they are all sad and disappointed, but I love how for the most part, they took inspiration from their efforts in the preliminaries and from the dishes which had beaten them (Yuuki was quite cool this chapter).

Rather than failure getting him down, it inspires him, what an interesting outlook of circumstances

The conversation Megumi had with Souma was a nice element to the chapter, it revealed Souma’s disappointment of not beating Akira but still becoming even more inspired to want to expand his abilities of cooking as well as his perceptions of the different worlds existing within there. The current talent Souma wields as well as the passion driving him makes you wonder how great of a chef Souma will be in 3 years. It really is incredible seeing Souma as well as the characters around him grow as chefs and people. Megumi in particular, Souma stated that she had the talent within her all along, which is true, but Souma did play an integral part in allowing Megumi to overcome her own disbelief in herself enabling her to finally see just how good of a chef she really is. With support it really is quite moving to see how a person blossoms.

Isshiki, so he does have this side to him, what a surprise! The serious, business-mode Isshiki, what a colourful fellow. He now has me curious about the job he has prepared for Souma and Megumi. With two weeks to go before the main tournament starts, what skills will Souma and Megumi pick up in that job? I am also curious to learn what the other finalist will be working on during the two weeks before the main tournament, especially now that they know there is some stiff competition during this years Autumn Election. Looking forward to the next chapter.