Oh wow, I got treated to something real good in this chapter, Unohana Retsu otherwise known as Unohana Yachiru, the first Kenpachi and the one who invented the art of killing. Oh goodness, I have been waiting to for the moment where Unohana is focused on, because she was such a curious character who seemed super strong and now, wow, we find out that she was a founding member of the Gotei 13 and was also regarded as the strongest.

The most diabolical criminal to ever exist in Soul Society…well now, what an immense contrast to the Unohana we have gotten to know these past 444 chapters, but surprisingly it actually fits and it adds depth to her character which I was not expecting. Now I want to know even more of her past and why she made the decision to join the 4th Division and focus on healing/saving people. Was it regret or remorse for all the killing she had done? Atonement? Well whatever it is, I’m really looking forward to the coming battle of Unohana vs Zaraki, especially seeing the techniques and sword styles Unohana has to reveal – Kyouroku does comment on her possessing all of the sword styles and flows in existence, hence the name “Yachiru”.

Seems like Unohana and Zaraki have some background together, each causing permenant scars on each other, Zaraki being the first and only person to ever wound Unohana. As things stand, Unohana seems to be at such an overwhelming level compared to Zaraki, but that’s only because we seen Zaraki in action before – he got defeated by Ichigo back in the Soul Society arc and now in this arc he got completely thrashed by Juhabach. I’m just curious to see how the statement Kyouroku made about either Unohana or Zaraki dying if the two clash will play out, is Zaraki really a challenge for Unohana, one of the strongest Captains in the Gotei 13 if not the strongest? Now I know Zaraki is strong but is he Yamamoto strong or near that level? Because it does seem Unohana is near that level, well I guess her skills could have dulled over the years of not practicing the “art of killing”.

Very very excited about this battle and of course more Unohana, I absolutely love this development about her =D. 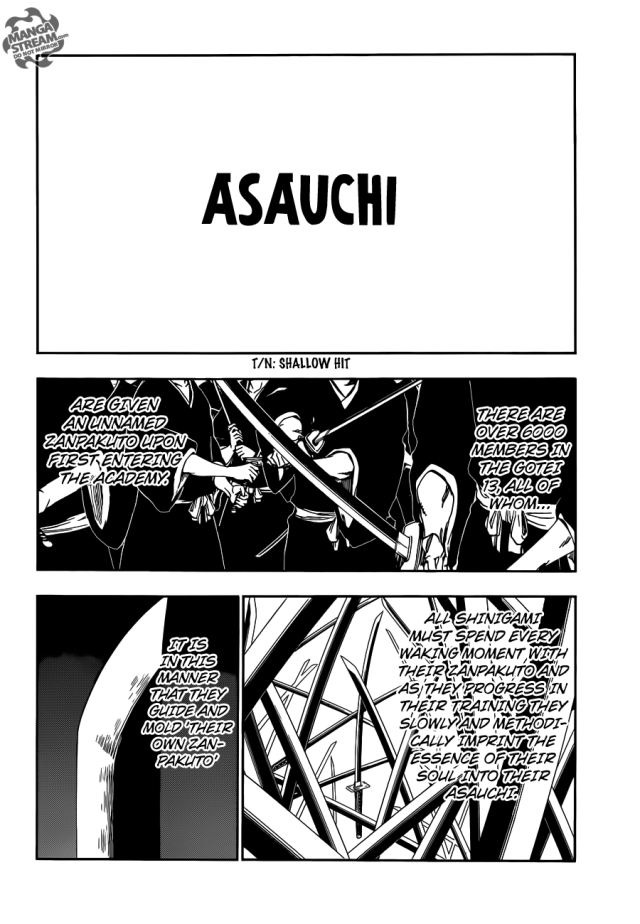 Ichigo and Renji, oh so they have to face these “Asauchi”, the base of all zanpakutou. Before a zanpakutou evolves into an actual individual zanpakutou, each Asauchi seems to need to be molded first by each individual Shinigami. As Shinigami progress through the academy, they imprint their zanpakutou with the essence of their soul, thus creating their own zanpakutou. So that’s how it works, a zanpakutou isn’t entirely the manifestation of a person soul but an “existence” built on the essence of a soul. The Asauchi are like empty container, each getting filled with the Shinigami’s essence as they develop and eventually deriving a consciousness of their own. Now I seem to understand how the Vandenreich were able to “steal” the Captains’ zanpakutou, it’s because the zanpakutou were never linked to the Shinigami in the first place, the zanpakutou were always separate and were only molded by the Shinigami’s soul (rather then being part of it).

And those white beast attacking Ichigo and Renji, Ichigo had mentioned that they were the physical manifestation of the Asauchi, but aren’t they actually THE Asauchi not just the physical manifestation? The zanpakutou aren’t the sword but the existence within it. I’m not really shocked the Asauchi are attacking those two, Ichigo and Renji haven’t really shown treatment of their zanpakutou beyond being a weapon. My guess is that the Asauchi are angry the zanpakutou aren’t seen as existences.

This was a great chapter, looking for the next one =D.