One of Kaido’s biggest errors was not assessing the potential of his enemies adequately. Blinded was he by the inexperience of the challengers standing against him that the apparent form of their threat became obscured by the arrogance of his own pride. Kaido had many opportunities to recognise the true danger existing in front of him but the delusion of his superiority mask what is now blossoming before him. The flame burning within Luffy has reignited and within its blaze is the awareness of Haki and the application that is possible. Kaido’s power may be vast but the opponent before has a potential not yet defined. And the longer Luffy comes to familiarise himself with the application of Haoshoku Haki, the more dangerous he becomes to Kaido.

END_OF_DOCUMENT_TOKEN_TO_BE_REPLACED

Immense is the obstacle before the next generation yet impossible is something it is not. Unbeknownst to the Yonko before them, the conviction behind the next generation’s acts carries the belief and capability that a possibility which should be improbable is entirely within reach. And in no small part is the underestimation of their abilities playing a part in seeing the pillars of the New World toppled. The Yonko have continually looked down on their younger rivals allowing for a blindspot within the Yonko’s perception of possibility to conjure itself. The lack of expectation and belief the Yonko have in their opponents capabilities will ultimately lead to their eventual downfall.

END_OF_DOCUMENT_TOKEN_TO_BE_REPLACED

Determined is her mind. Unyielding is her body. Resolute is her spirit. And inspiring is her courage. The actions of Yamato, against the force of the Beast Pirates, convey a strength sourced from the suffering of her struggles and her intense admiration for the hero of Wano Kuni. Despite the overwhelming situation she now finds herself in, the weight of what is at stake drives her forward toward a present that requires Momonosuke to survive. To a dawn that will see the liberation of Wano Kuni and its reconnection to the rest of the world.

END_OF_DOCUMENT_TOKEN_TO_BE_REPLACED

Seeing as the Beast Pirates were susceptible to spies joining their ranks or affiliates (X Drake and Kyoshiro), other factions may have sent undercover agents to join the Beast Pirates. One person I can see stationing a member of their crew within the Beast Pirates to keep tabs on Kaido and his actions is Doflamingo. It has been established already how shrewd a man Doflamingo is and the extents he goes to in order to protect himself and his status. Information was one of Doflamingo’s most powerful weapons. It allowed him to become a Shichibukai and to keep the World Government at bay and semi-subservient to him (using the CP-0 to trick Law into believing he quit being a Shichibukai). Doflamingo had Monet go undercover in the Dressrosa Palace prior to their invasion and on Punk Hazard to keep eyes on Caesar, a partner in his dealings with Kaido. Given all that Doflamingo has done, it seems natural he would also have had someone positioned at one point in time undercover in the Beast Pirates.

END_OF_DOCUMENT_TOKEN_TO_BE_REPLACED

Wow. Just wow. Even though I expected such a twist, the reality of the twist subjecting its contours and possibility onto my psyche has me electrified at the potential avenues in terms of development this reveal just brought about. The thought (Yamato’s identity) crossed me mind. I entertained it shallowly but cast its existence into the realm of improbability in favour of a flow more coloured in “actuality” but the sheer fantasy of the possibility existed within my mind. How euphoric it feels, that something so delusional and unlikely has manifested itself into substance. I dare hope more possibilities guised under the veil of impossibility be more than what we as the readers are intentionally “misled” to believe.

END_OF_DOCUMENT_TOKEN_TO_BE_REPLACED 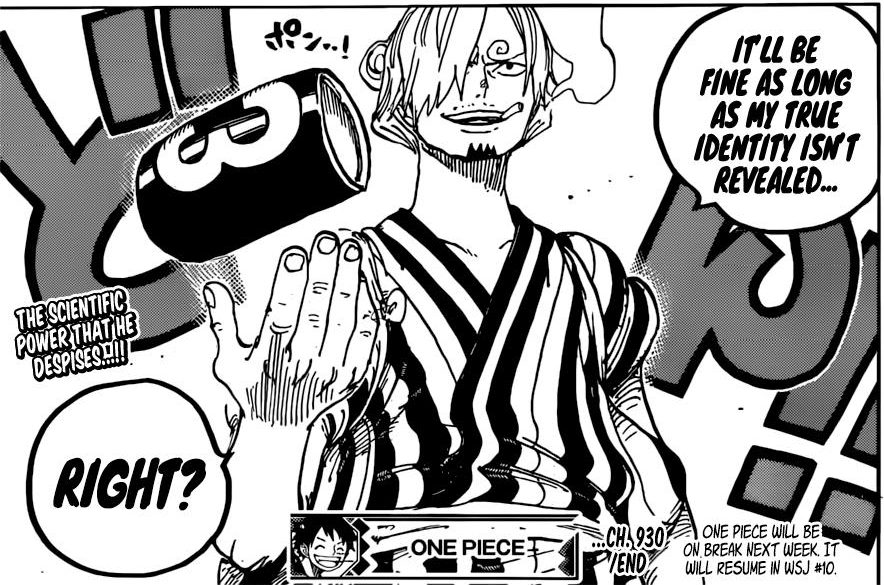 What an exciting chapter that leaves you eager for the events about to follow. Sanji finally has an opportunity to earn his bounty level because the current wanted poster bounty he has is extremely generous and undeserving. I personally feel Sanji has more to do to deserve a bounty higher than Zoro who has been directly influential in the downfall of enemies that stood against the Straw Hat Pirates since entering the New World. This chapter thankfully opens up the door to Sanji to help display that he is worth the bounty on his head.

END_OF_DOCUMENT_TOKEN_TO_BE_REPLACED 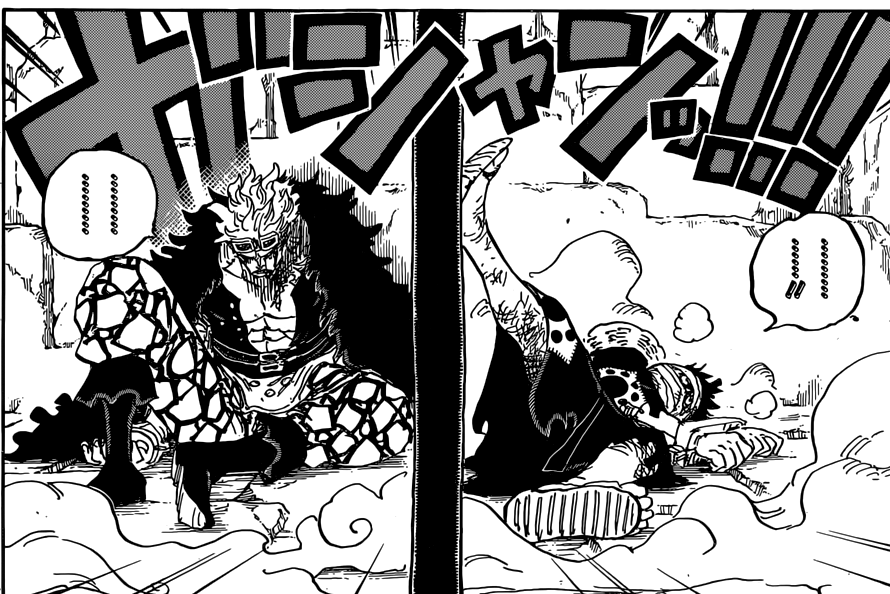 Once Luffy gets some meat…just you wait Beast Pirates…

Well that is one way to bring Kid into the focus, by having Luffy being captured by Kaido as well. I expected Law to save Luffy but it turns out that Hawkins predicated such an outcome and acted to minimize Law’s capabilities. Kaido does not know it yet but by bringing Luffy and Kid together, he may have effectively paved the path towards his own downfall.

END_OF_DOCUMENT_TOKEN_TO_BE_REPLACED 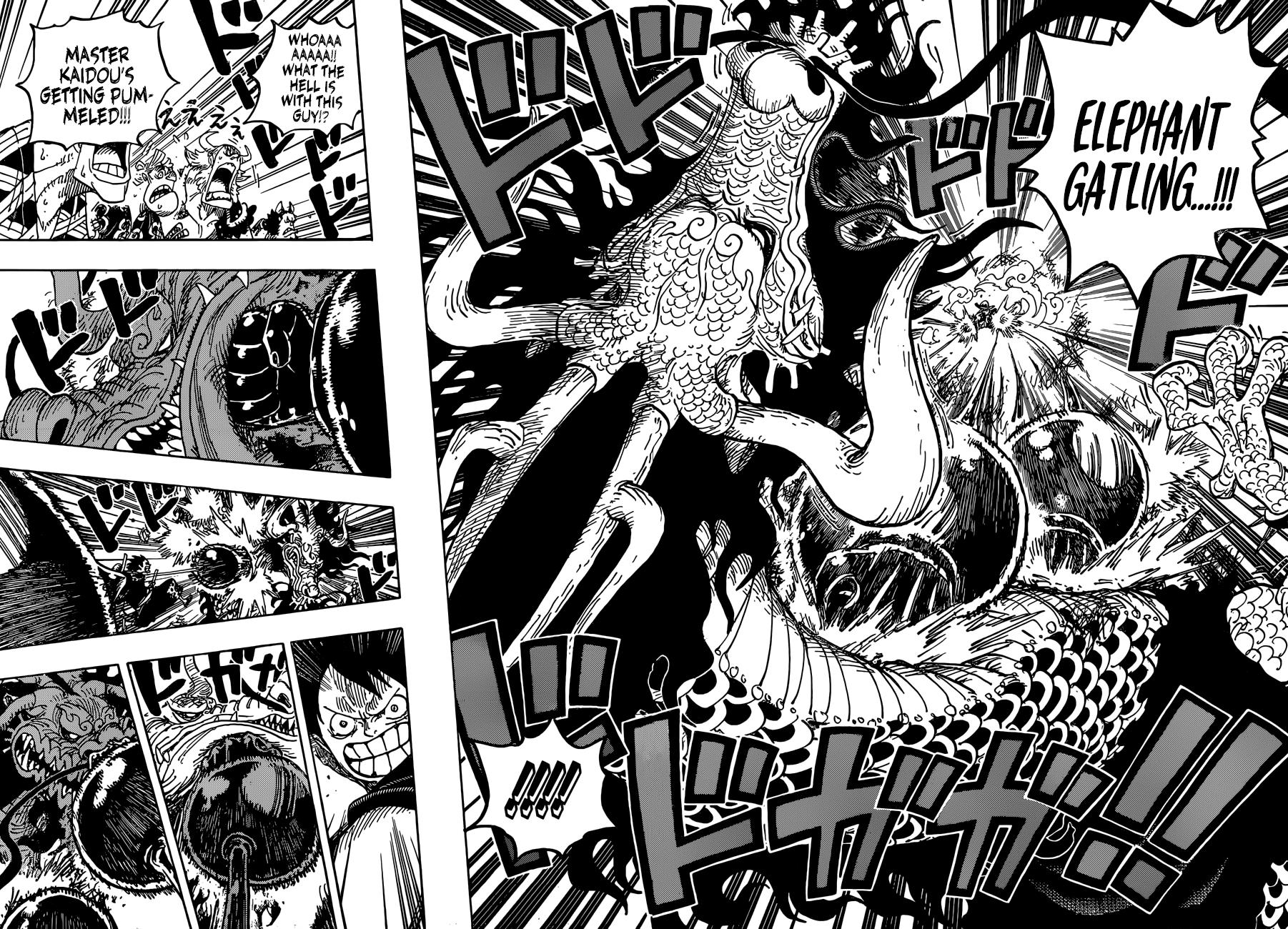 I expected this result but for Luffy to be instantly KO’d in Gear Fourth with one hit by Kaido, I didn’t anticipate such a decisive and overwhelming end to their first bout. It was glorious seeing Luffy unleash on Kaido and force Kaido back to his human form but the way Kaido finished the fight conflicts with everything that occurred just before. Why did Kaido not unleash earlier?

END_OF_DOCUMENT_TOKEN_TO_BE_REPLACED 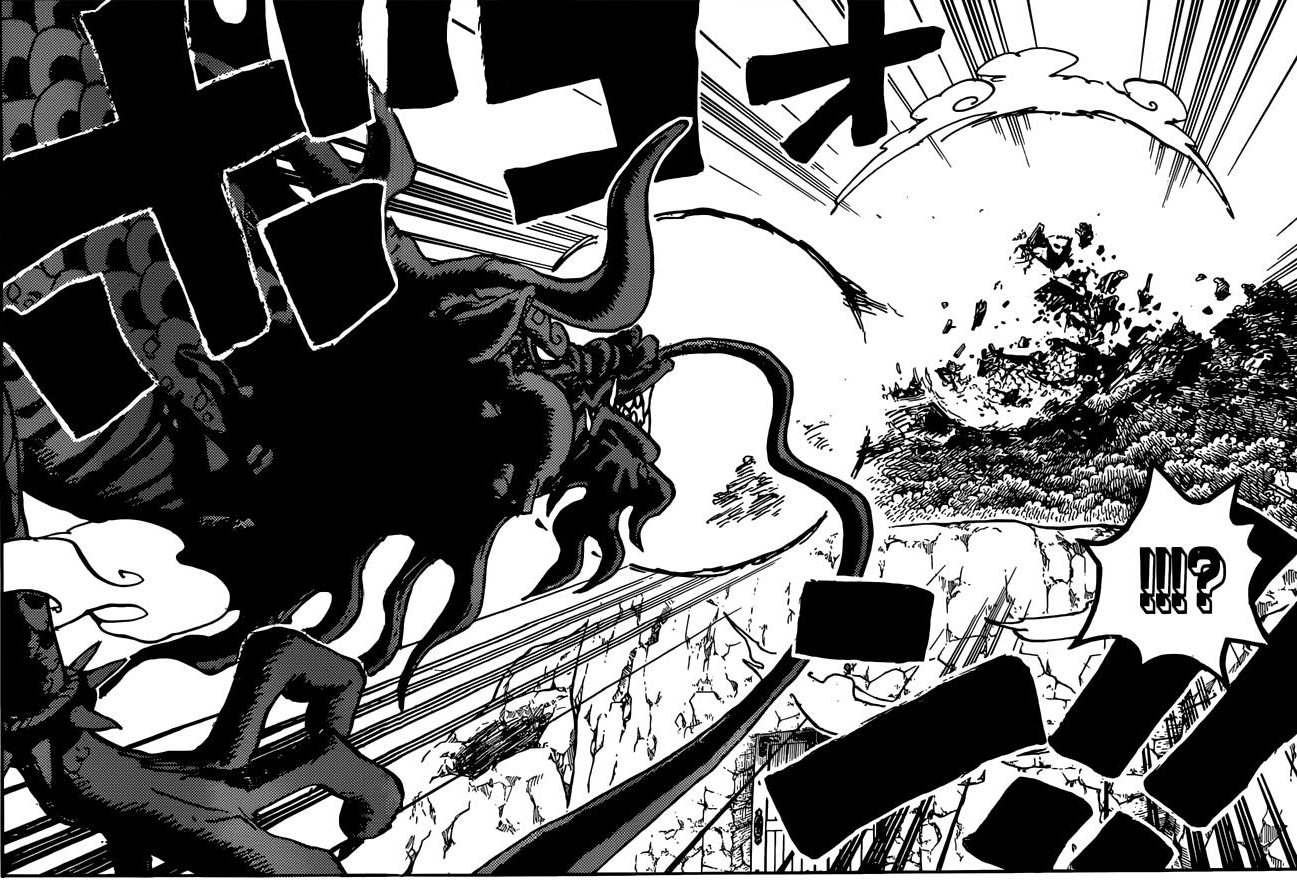 A wild Kaido appears! And an equally wild Luffy attacks. I did not expect that, for Luffy to challenge Kaido right then and there. I understand that Luffy reacted to Kaido blowing up Oden Castle but to have Luffy put in such a situation where he would unleash Elephant Gun on Kaido, how utterly crazy. For anyone within the One Piece world who isn’t a Straw Hat Pirate, Garp or Shanks to have thought they knew Luffy, they definitely were wrong. I don’t think even Hawkins’s conditional predictive powers could have foreseen this particular set of events. Luffy punched Kaido! Luffy PUNCHED Kaido in the head!! Kaido was mad at Luffy before but with that personal strike, he will be furious once he realizes what went down i.e. Luffy’s fist.

END_OF_DOCUMENT_TOKEN_TO_BE_REPLACED 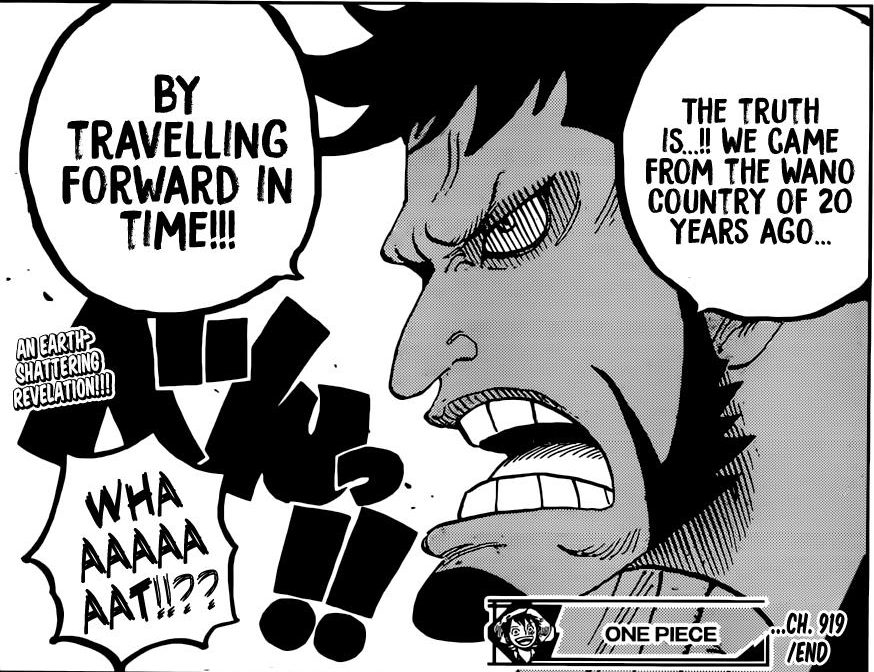 Well that “can” got opened. What an unexpected plot twist. I am not sure what to think and whether such a twist has opened up a whole new dimension to One Piece. I didn’t expect it, I don’t think anybody expected it, it is such an absurd direction that it was seemingly implausible. For Kin’emon and Co. to have come from the future, how shockingly intriguing. How? Why? Who? When? Kin’emon is serious, right?