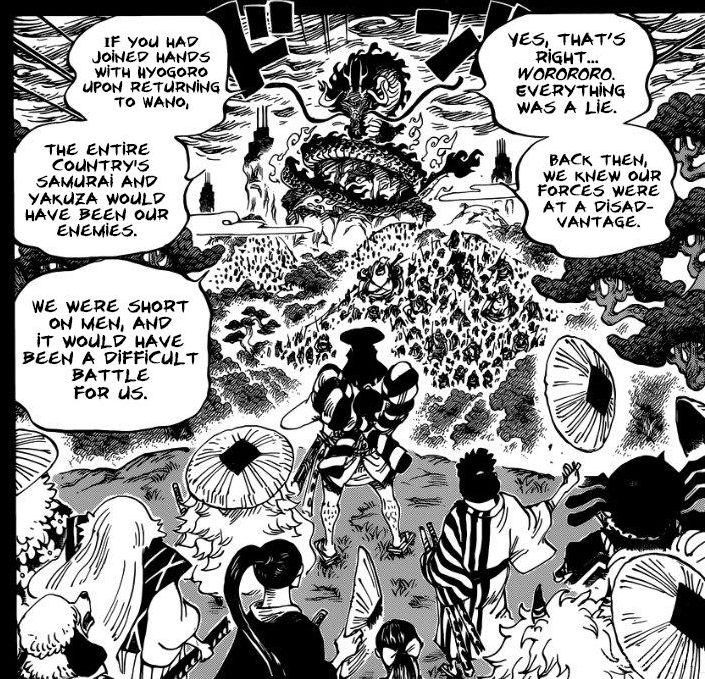 Even Kaido was afraid of Oden

Based on the events that happened, it is apparent that Oden overwhelmed Kaido and if not for Orochi’s deceptive tactics, it is likely that Kaido would have suffered more than just that wound. But unfortunately war involves more than singular battles with an outcome instead decided by the overall usage of the pieces available for use. Orochi, as cowardly as he may be, took of advantage of Oden’s heart and used the Mane Mane no Mi to mentally and emotionally distract Oden. That moment in which Oden turned his back on Kaido created a blind spot in which Kaido exploited to land the deciding blow. At the end of it all, Orochi knew Oden’s heart too well and took advantage of it to give Kaido the edge in that battle. The difference between the past and the current events is Orochi’s inability to even conceive what type of person Luffy is. And that is where Kaido and Orochi have overestimated themselves, thinking that they know Monkey D. Luffy.

In cannot be coincidence that in both the past and the present, information that Orochi should not be aware of has found itself in front of Orochi. How did Orochi and Kaido know that Oden would retaliate when he did after years of non-action? And how did Orochi know about the present times rebellion’s actions to invade Onigashima Island? Kaido mentions in this chapter that there may be spy in Oden’s ranks and can that statement be more than just mere instigation? Could Orochi have had a spy in the past and in the present and could the present time spy be the same as the one in the past? With twenty years separating the two events it is hard to identify any similarities between the two but beyond the Nine Red Scabbards, the only other person both active in the past and in the present is Shinobu. We barely know much about Shinobu but could she really be the medium through which Orochi is receiving his information? If so, is Shinobu even aware of this? While it may be possible, I don’t believe this is the case. Shinobu’s loyalty to the Kozuki family has been too genuine so far to now reveal that she was the reason the rebellions have failed. The question still remains, how is Orochi receiving his information? 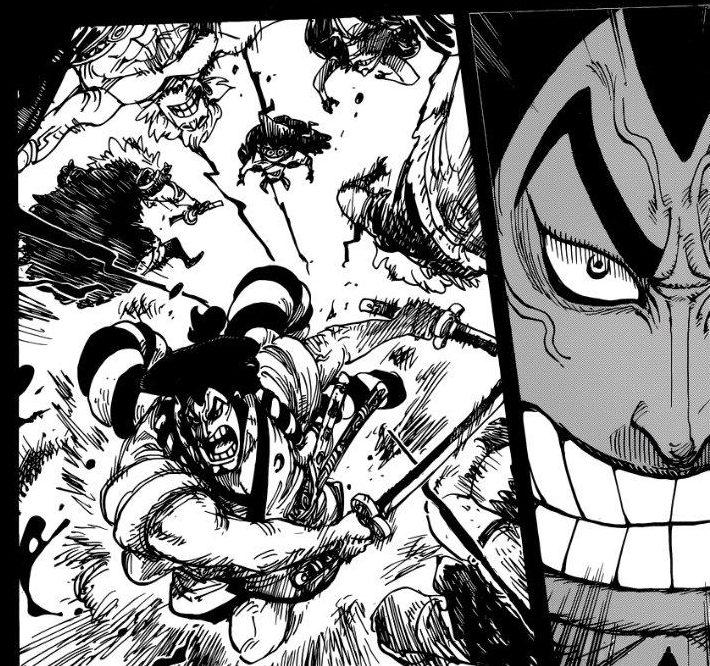 Seeing that Oden was able to wound Kaido, whom was known as the invincible Kaido, illustrates just how powerful Oden’s Busoshoku Haki skills were. But seeing as Oden couldn’t sense that Momonosuke wasn’t there when the fake Momonosuke revealed themselves also conveys that Oden wasn’t that well versed in using Kenbunshoku Haki which is a shame because it was moment that turned the tide of battle in the war between the Samurai and the Beast Pirates. If only Oden thought a bit more deeply about the situation, he would have realised that Momonosuke couldn’t be there and may not have reacted the way he did and leaving himself open.

With not even Oden being able to defeat Kaido and Orochi, how will Luffy end up defeating Kaido AND Big Mom? Of course through the assistance of others. Luffy is not alone in facing off against such opponents, he has his crew mates, his alliance members like Law, the Nine Red Scabbards, those of Wano Kuni who still wish for change, Tama with the ability to tame beast, and fellow rivals like Kidd and Drake who also wish to stop Kaido. Luffy may not defeat Big Mom in this arc but Kaido is going down. Also Zoro will defeat Orochi and take back Shisui (he NEEDS to!). Very much looking forward to the next chapter.