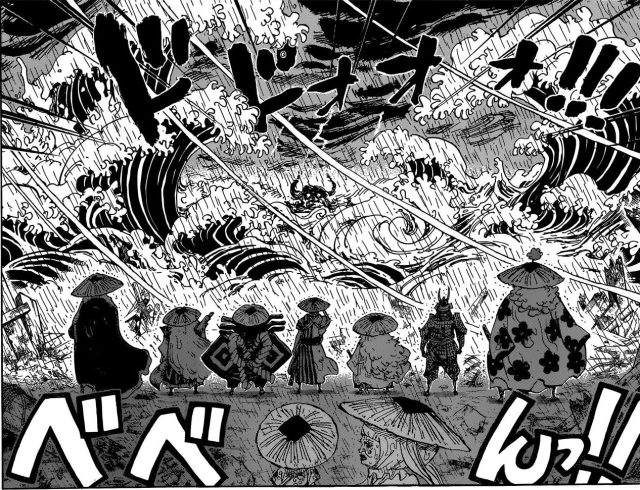 Orochi’s desperation is precipitating towards his actions but given the information he had available and the fears of his downfall which he has been dreading for the past 20 years, it is only natural to see Orochi do whatever he can to avoid having the power he once brutally stole away from the Kozuki Clan now being robbed away from him. Even if it means destroying the bridges that connect the different Islands of Wano Kuni together, Orochi considers that destruction necessary to prevent the rebellion from launching an assault on Onigashima Island. What Orochi has failed to take into account is the ingenuity of the Straw Hat Pirates and what they are capable of in such situations. One way or another, despite Orochi’s efforts and beliefs, the rebellion shall reach Onigashima Island.

Having looked at the Wano Kuni map with the destroyed bridges, it appears that the bridges connecting to the Flower Capital are still intact so the possibility of reaching Port Tokage through the Flower Capital still exist. Currently Kyoshiro is in charge of the flower capital but given his suspicious behaviour throughout the arc, I wonder if he will oppose the Straw Hat Pirates. What exactly is Kyoshiro after and is he really an ally? Or does he belong to a third party, say the CP0, and has an objective currently unrevealed? I still believe Kyoshiro assisted in faking Hiyori’s death and her escape, which makes me wonder if Hiyori has some kind of back up plan in place for such a situation? Hiyori has waited for this day for 20 years and knowing how Orochi functions, she may have expected this situation and known that Orochi would destroy the bridges to restrict the movements of the rebellion. Could Hiyori rally the support of the Wano Kuni citizen’s gathered in the Flower Capital while Orochi and his main force are away? What is certain is that Port Tokage can be reached through the Flower Capital (if they go by land).

Orochi’s silences the rebellion plans with acts of destruction – where is it getting his information from?

The other possibility is reaching Port Tokage through the water. While the path to the Flower Capital is open, it may take them too long to travel that they may miss the scheduled assault time. Now lets say Kuzan appears and freezes the water allowing them to cross the Islands without the bridges (yes, I really want Kuzan to appear in this arc)? Well that would certainly assist them reaching Port Tokage. If this were to happen the only issue would be reaching Onigashima Island as the ships that were built appear to be destroyed at Port Itachi. Franky did arrange for extra ships to be built, and Oda-sensei did want us to know that extra ships were built despite Franky being told by the Wano builders that they weren’t required. Oda-sensei would not have taken that effort to put that in if all the ships were eventually going to be destroyed on the just before the rebellion sets out to Onigashima Island. I believe that those extra ships were stored somewhere else and they will now come in use.

The reminder of Jinbe definitely confirms his eventual appearance within Wano Kuni at some point. Most likely during a crunch moment when the Straw Hat Pirates back are against the world, Jinbe will show up and establish just why he presence within the Straw Hat Pirates is necessary. With Jinbe’s appearance, Luffy may even come to know about Sabo’s fate, the events in Mary Geoise, the status of the Alabasta Kingdom and the dissolution of the Shichibukai which signals the danger Boa Hancock now faces. Given that Jinbe will know about that information (if not a prisoner of the Big Mom Pirates), he can only really appear during the climax of the arc as if Luffy learns of any danger to Sabo, he will leave Wano Kuni to save Sabo. Jinbe will also have knowledge of the alliance between Kaido and Linlin (if not imprisoned by the Big Mom Pirates) and would likely be currently gathering allies and resources to assist with the battle against the Beast Pirates and the Big Mom Pirates. Whatever does happen, I am immensely excited for Jinbe’s reappearance.

What is hidden away within the shadows of Wano Kuni?

Kozuki Oden, his role within this arc is shaping up to be more significant than I initially expected. Given the focus Oda-sensei has given to the opening of Wano Kuni borders, once that reality does come to pass, how exactly will the world be rocked by such a development? Oden planned for it to happen way back in the past but Oda-sensei created the scenario of Orochi betraying Oden and stealing away sovereignty of Wano Kuni to keep the border of Wano Kuni closed. What exactly did Oden plan to do by opening the borders of Wano Kuni? What secrets does Wano Kuni hold? And in some way did he pass that knowledge onto Hiyori and/or Momonosuke?

On a side note, what exactly is up with the Octopus that appeared at the start of this arc? I can’t help but believe that the Octopus which the Straw Hat Pirates encountered has something to do with Oden. Could that Octopus be some sort of incarnation of Oden? Could it be the Witching Hour boy? Or is that Kyoshiro? When will remaining Nine Red Scabbard member, Denjiro, show up? Very much looking forward to the next chapter.

This entry was posted in One Piece and tagged Kinemon, Luffy, Manga, Oda Eiichiro, One Piece, Wano Kuni. Bookmark the permalink.
%d bloggers like this: