This is not good news for anyone!

Both Kaido and Linlin have reason to hate and fight each other but it appears they have instead decided to focus on the reason they have to work alongside each other, one that should send shivers down every inhabitant of the One Piece world. For two titanic individuals to seemingly ally with each other to conquer the world means a grim reality for everyone else. Joining together Big Mom’s information network and Kaido’s beast army is a recipe for destruction and chaos. Baring one of the two turning on the other, Luffy and the Straw Hat Pirates cannot hope to take on two of the strongest individuals in the New World together. Luffy may be the rebels secret weapon but he would just be carved apart against both Kaido and Linlin, unless of course Zoro is able to enhance his swordsmanship and assist Luffy against the Yonko. Even still, the gap in power is just too wide for the rebels to take on two Yonko. Which is why I feel that a third party will become involved in the coming events, namely Kuzan.

The reason I feel for strongly about Kuzan’s inclusion in the Wano Kuni storyline is because of his presence on Punk Hazard near the end of that arc and his search for something there yet unrevealed. Kuzan was aware of Doflamingo’s dealings, understood his danger and likely knew the arrangement Doflamingo had with Kaido. Given that Punk Hazard was used to produce SAD for Kaido’s SMILEs and Caesar’s research for Big Mom regarding enlarging individuals, it appears only logical that whatever Kuzan was searching for on Punk Hazards relates to either Kaido or Big Mom or even both of them.  With the Wano Kuni Arc featuring Kaido and Big Mom so prominently, it would be a fitting place for Kuzan to reappear. I also feel Kuzan needs to see Luffy’s growth especially when it was his victory over Luffy that led Luffy to advance his abilities by developing Gears.

Oh Zoro, why’d you agree to that trade? Shusui is yours and despite no one believing your story about meeting Ryuma’s spirit, you were given the blade by Ryuma. Being the man that defeat Ryuma, you are the only other person beside the Sword God who should be wielding Shusui and if Shusui is no more to be wielded in the story of One Piece, that would be a tragic shame. Zoro has been defending his claim to Shusui since Kin’emon found out about Zoro possessing it and now having Zoro turn around to trade it in would be such a disappointment. Let’s hope when Zoro gets the chance to visit Ryuma’s grave, the spirit of the sword is able to display to everyone present that it chooses Zoro to wield it. It is mildly irksome that Zoro is being treated as some second-rate Swordsman to be forgotten shortly after his exit from Wano Kuni but I know that Zoro will get the opportunity to express his abilities which makes his treatment by Onimaru, Hiyori and Kawamatsu endurable. I am also looking out for any indication for Zoro having been born in Wano Kuni and being taken away shortly after his birth due to Orochi betraying Oden and taking over Wano Kuni (Zoro would have been one year old at that time). Zoro’s parents may have either left with Zoro when Oden was killed or more likely, sent Zoro away with a relation and stayed behind to protect Wano Kuni due to their honour and loyalty for Oden. Makes me wonder if when Zoro visit’s Ryuma’s grave, he happens upon his parents or one of his parents grave. 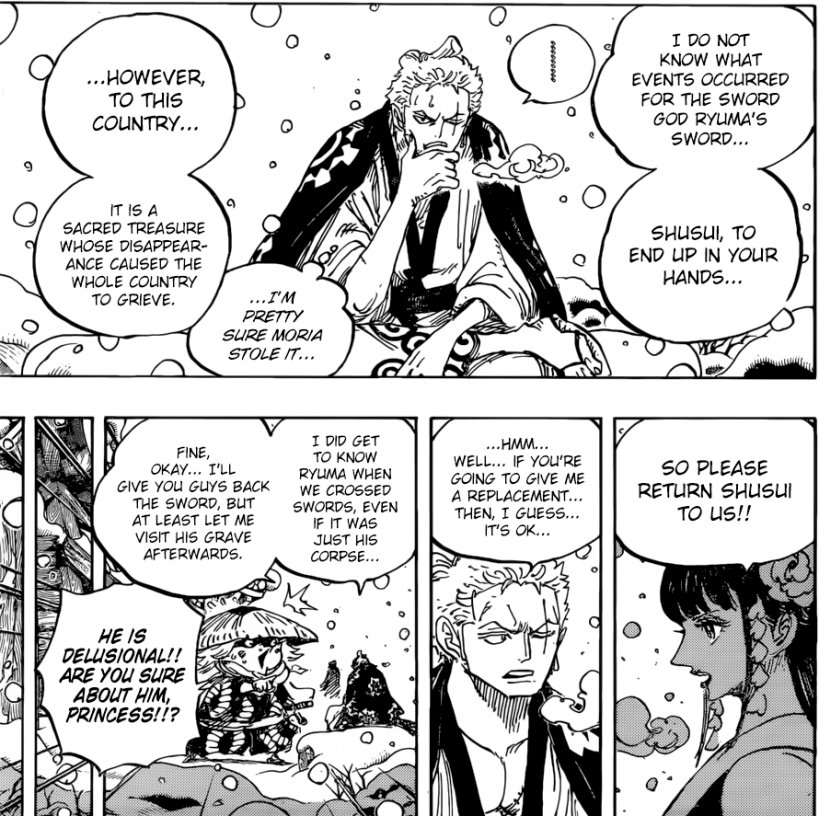 Additionally, what I feel will also happen when Zoro visits Ryuma’s grave is encountering the grave of Shimotsuki and making the connection between the town he trained in to the renowned family of Ringo, the Shimosuki Family. The story between the shared name could be explained by Koushirou and Kuina (whose last names are not known yet) were part of the Shimotsuki clan and when Orochi overthrew Oden, Koushirou fled with Kuina. Or Koushirou left Wano Kuni at some point in the past to journey and ended up falling in love and settling down. If there is a connection between his sensei and Wano Kuni, Zoro wouldn’t feel like such an outsider and have real stakes in this battle with his sensei being a member of the Shimotsuki clan. This could explain why Kiku recognised the shout Zoro makes when Momonosuke mentioned it, because it was practiced in the past by the Shimotsuki family who Koushirou was part of whom trained Zoro.

Also Kyoshiro was the one who let Law escape without doing anything, I’m sure of it! The only thing that is causing me doubt is that the character in the silhouette is wearing shoes/boots and I don’t believe we have seen Kyoshiro before with such shoes. Now that I think about it, it could be X Drake…well whoever it was, we finally learn why Hawkins sided with Kaido and that Scratchman Apoo set-up Hawkins, Kid and Killer. Very much looking forward to the next chapter.