One Piece Chapter 940 – The Rebellion Against Orochi 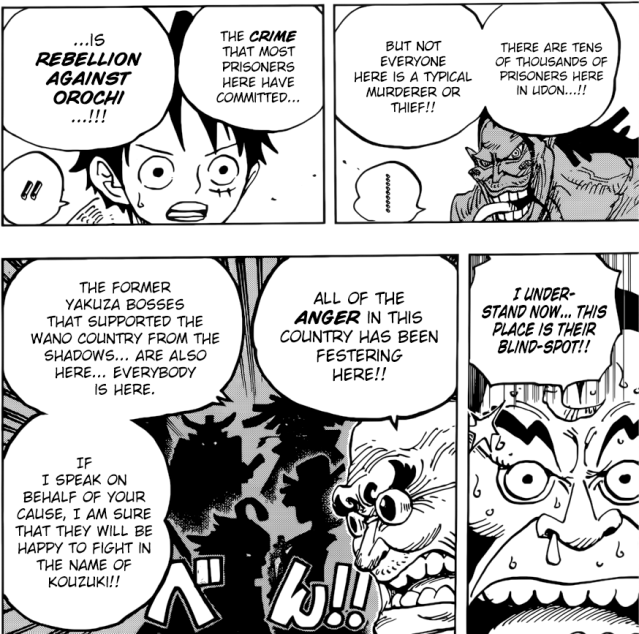 What mysterious characters will we come to be introduced to?

We finally get confirmation that the targets of Hiyori’s scam while under the guise of Komurasaki deserved every bit of misfortune they received. Those who Hiyori cheated were individuals within Wano Kuni who preyed on the weak and exploited the system to make money. Those individuals without question earned all the grief and suffering they are receiving. Hopefully, with time, those three can be humbled by their ignorance and grow from the suffering they will face. The officials of Wano Kuni willfully turned a blind eye to such activities once bribed ignoring the suffering of the people they should be serving. Hiyori took it upon herself to seek out justice and prevent others from being tormented by such actions of the corrupt. She once again displayed her strong spirit and her desire to protect the culture and peace her parents had nurtured before being unjustly killed by Orochi and Kaidou. 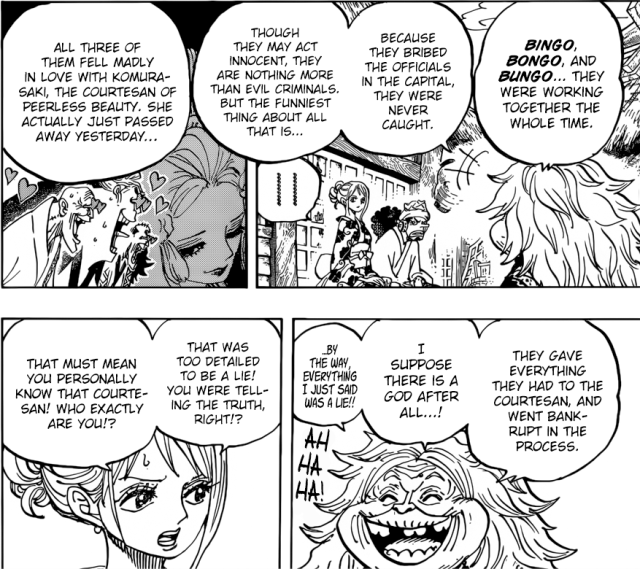 I wonder if that old lady is Hiyori’s grandmother?

I strongly believe that the individual who is the most capable to lead Wano Kuni within these tumultuous times once Orochi and Kaidou are taken care of is Hiyori. Despite Momonosuke being the next Kouzuki in line, Hiyori is the most fit to wield the weight of ruler; she has suffered alongside the people and yet remained focused on what needs to be done without succumbing to her despair and the uncertainty. While Hiyori did have her dark moments, she found the strength needed to endure through those times of sadness and never let those doubts fully consume her. Hiyori’s spirit remained intact, galvanised by her will and never forgot the ideals of her parents. Hiyori’s very spirit embodies what is needed to heal the rift opened by the failings of Orochi and Kaidou. When it comes to duty, experience and necessity, Hiyori is the best fit for leading Wano Kuni next. The Kouzuki name burns strongly within Hiyori.

With the focus now centering on the Prisoner Mines, something major is about to happen and thanks to Hyougoro’s comment about the hate toward Orochi being consolidated within the Prisoner Mines, the readers now know that a complete jail break is bound to take place. A key player necessary in the rebellion plans has been stated to be Kawamatsu the Kappa, who appears to have some sort of useful ability capable of benefiting the rebellion. Kawamatsu is one of the Nine Red Scabbard’s but beyond that and him being a kappa, nothing major has been revealed about him, not even his appearance yet. Within the Prisoner Mine sections, Luffy and Co. will have to navigate through them and free all the prisoners trapped within. Hyougoro has revealed that former Yakuza bosses are trapped in other sections of the Prisoner Mines but what has me most curious is if any surprise characters will we seen when the jail break is underway – Killer? A former character from a previous arc? Or a new character that is destined to be relevant within the future of One Piece? 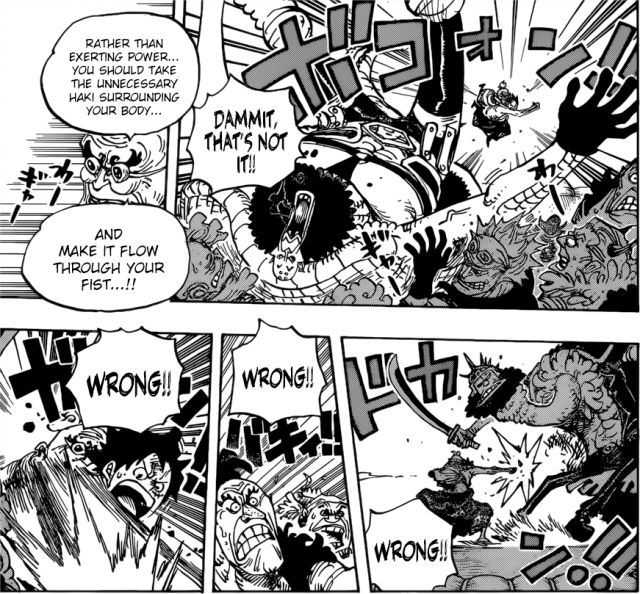 Will any other Beast Pirate member want to challenge Luffy tomorrow?

Luffy is still in the process of training his Busoshoku Haki but with the jail break about to take place, he may get an opportunity where he needs to push himself beyond his limits be it against Queen or Linlin or both of them. Luffy understands how the advanced Busoshoku Haki works but what he needs to do now is actually do it. Necessity will likely push Luffy to a point where he will end up controlling the flow of his Haki and utilising it on another person/object

Linlin approaching and starving is a terrible forboding sign for everyone. Once Linlin enters her rage mode, only death and the satisfaction of her desires can stop her. Linlin will definitely benefit the jail break once she rages for Queen’s oshiruko but once she see’s Luffy, every fiber of her self will recall her hatred for him and her rage switch will be flipped to utter destruction. Chaos will ensure within the prisoner mines and the Straw Hat Pirates will use that opportunity to secure new allies and escape.

Momonosuke and Hyougoro will be key in convincing the broken down prisoners to become inspired again to fight for their freedom and to take up arms again against Orochi. Very much looking forward to the next chapter!

This entry was posted in One Piece and tagged 940, Hiyori, Hyougoro, Luffy, Manga, Oda Eiichiro, One Piece, Wano Kuni. Bookmark the permalink.