One Piece Chapter 926 – Hope Within Prison 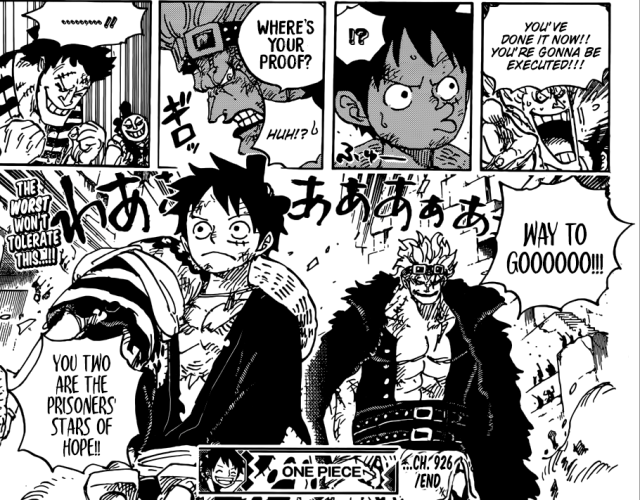 Besides Caribou, I wonder who else Kaidou has captive

It has started, the spark of rebellion has been lit burning away at the fuse towards the downfall of Kaidou. The prisoners and ones betrayed by their nation will form the fibers necessary to carry the flame of change toward the moment capable of breaking the hold of Kaidou and Orochi perverting the reality within the nation. Orochi, Kaidou and the rest of the Beast Pirates aren’t loved across the nation. Many most likely comply due to fear. Once a path more appealing appears, people will naturally turn on Orochi and Kaidou towards the path more beneficial to themselves. For now, Wano Kuni’s options are limited but time and overconfidence are Kaidou’s biggest enemies.

Those three stories in the start about the Ghost, Manslayer and the Boy, they most likely will come into play further into this arc and have direct relevance to the battle against the Beast Pirates and Orochi. If those characters desire to save Wano Kuni, their best avenue to do so would be to ally with the Straw Hat Pirates. We don’t have much information on characters, so every said so far is pure conjecture they are currently being mentioned and not in positive manner by the newspaper. The Ghost one interest me, are they talking about Kin’emon and Co. or an actual ghost like entity? Persona is not in Wano Kuni, so it can’t be her. 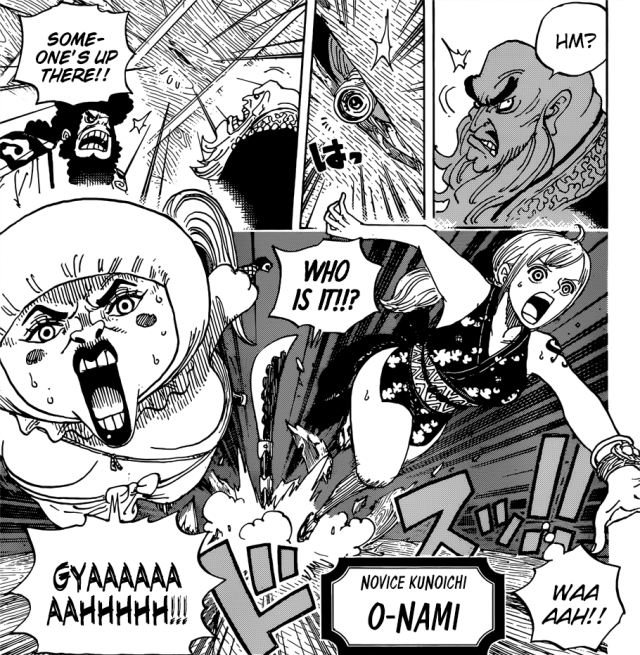 Nami will become a Kunoichi!

I mentioned this before but based on the focus Nami is receiving as a Kunoichi, it is extremely unlikely that the next Straw Hat nakama will be a Kunoichi. Oda-sensei even went out his way this chapter to label Nami a Novice Kunoichi and put her in a situation alongside a Kunoichi doing ninja stuff. Oda-sensei likely plans to develop Nami’s abilities and add Kunoichi skills to her already interesting range of abilities. In order to compete with the Yonko crews, the weaker Straw Hat Pirate members will receive such focus to expand their battle capabilities. If a new nakama is to be introduced within this arc, it will be one far more interesting and unique than the characters we have already seen within his arc or recently. It would also be a character who brings along with them experience beyond their fighting capabilities such as how Jinbe brings along with him a wealth of experience, knowledge and reputation. There wouldn’t be much time for a new character to develop so once they join the Straw Hat Pirates, they will need to hit the ground running.

Luffy and Kid’s interactions are hilarious. They make such a great team. While they act competitive, their souls are expressing just how alike they are. They have an understanding with one another through their rivalry. They may not become permanent allies but for the current circumstance they are in, they would combine their focus to focus on a common enemies i.e. Kaido. Kid would still be competing for the title of Pirate King and One Piece but in order to get back on the path, he will need to work will Luffy to overcome Kaido. Luffy likewise will have to do the same. Kid’s relevance also means that the Kid Pirates will have a role within this arc. Killer is also one of the Eleven Supernovas, so his appear is inevitable and being the cooler head within the crew, it will be interesting to see the plan he has been working to break Kid out of prison or at the very least, a plan to combat Kaido. Law and Killer could end up meeting and forming a temporary alliance.

Before Kaido is dealt with, Orochi will need to be defeated and to reach such an end, allies around Wano Kuni will have to be gathered. Serving as the shepherd, the Straw Hat Pirates and the Heart Pirates are gathering those loyal to the Kozuki family together. The 20 year gap of darkness for Wano Kuni has left many bitter towards the Kozuki family but thanks to Lady Toki, those loyal to the family still believe and hope. I am very curious to see how Oda-sensei handles this arc with two primary antagonist. Will he deal with both at the same time using different characters and/or teams or will they be defeated one after another. Let’s also not forget about Big Mom who is also after Luffy’s head and may likely also be featured in the latter half of this arc/saga. Big Mom could bring Jinbe along with her if he was captured in Totto Land.

I still believe Tama will be the deciding factor within this arc, her ability to pacify any beast opens up the potential of completely throwing Kaidou’s forces into disarray. One of Jack’s headliners already became Tama’s allies. If Tama wanted to, she could turn Kaidou’s complete army. If the fruit does have some downsides, I would very much love to find out what they are. Very much looking forward to the next chapter.

This entry was posted in One Piece and tagged 926, Kid, Luffy, Manga, Oda Eiichiro, One Piece, Wano Kuni. Bookmark the permalink.