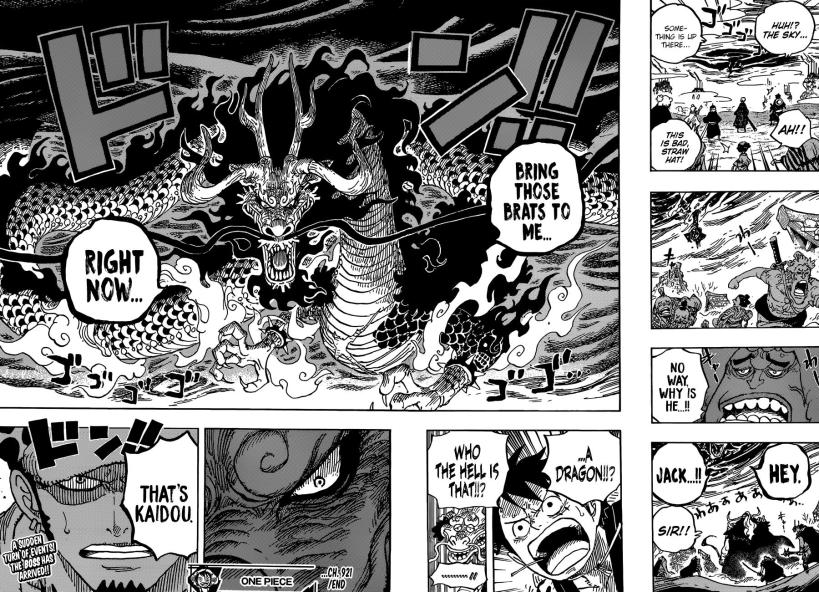 Kaido has such an amazing character design, in both his human and Dragon forms. Oda-sensei completely succeeded in conveying Kaido by just his image as being someone incredibly brutal, regal and inhuman. Kaido’s sheer design demands attention and beckons the reader to take note of what he as a character does. We know next to nothing about Kaido and yet as readers we find ourselves entranced by him. Kaido’s introduction definitely set him up perfectly as a Yonko to fear. With such a terrifying character now targeting the Straw Hat Pirates, the stakes have been raised and the movements of the Straw Hat Pirates have become significantly more important. Will Luffy really encounter Kaido this early in the Wano Kuno arc?

Shutenmaru, what? How? Really? When? Seriously? I don’t believe it….In a matter of pages my perspective of him was completely flipped on its head only to have that perspective flipped again. I expected one thing when we heard about Shutenmaru from third parties, another thing when his character design was revealed and a completely different thing after his skirmish with Jack. In seconds Shutenmaru went from someone semi-relevant to a character whom I am now completely interested in learning more about. What about with Shutenmaru to Jade his perception about Samurai and helping others? Why is he so strong? And how will he factor into the story of this Arc? Shutenmaru’s character design severely belies his true strength and capabilities. Not even Jack could react in time against Shutenmaru’s attack. What we can say with certainty is that Shutenmaru takes pride in being a Samurai evidenced by his statement to Jack to not ‘underestimate Samurai’. 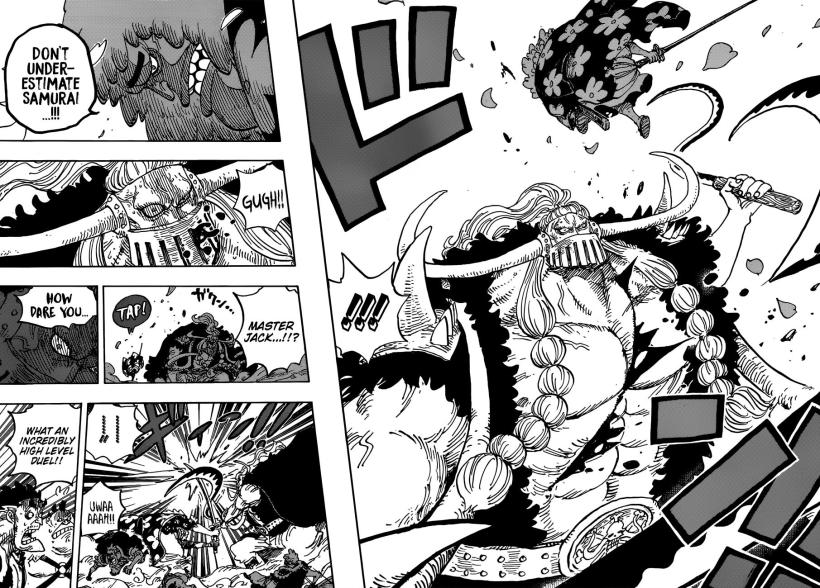 Tsuru, ah I was wrong! So wrong, she is not Momonosuke’s mother but she is related to the Samurai who disappeared 20 years ago. To think she is the wife of Kin’emon. I honestly did not expect Tsuru to be Kin’emon’s wife considering Kin’emon’s tendencies to fawn over other woman the way he does. I expected him to be single or at the very least widowed. For Kin’emon not to realise the luck he has for marrying Tsuru and committing to her completely, what a silly man. Hopefully once he reunites with Tsuru, his pervasive nature subsides. But now that we know the connection Tsuru has, what happened with Lady Toki? Has she really died and will that death set-up a deeper story with Lady Hiyori? It is grossly premature but could Hiyori be a potential candidate for a Straw Hat Pirate? Momonosuke could take the seat of Shogun once Orochi is dealt with which allow Hiyori a chance to see the world. Or will Oda-sensei go down the path of Hiyori leading the nation once Orochi is defeated?

Eustass Kid will play a major part within this arc based on how Oda-sensei equated Kid to Luffy and Law during the Shabaody Archipelago Arc. It would make the most sense if Kid’s relevance were introduced early on in the arc to give him the time to make an impact on the story. If Kaido reveals he has Kid imprisoned, will Luffy react by revealing himself and challenging Kaido? Or will they adjust their current plan to factor in saving Kid? 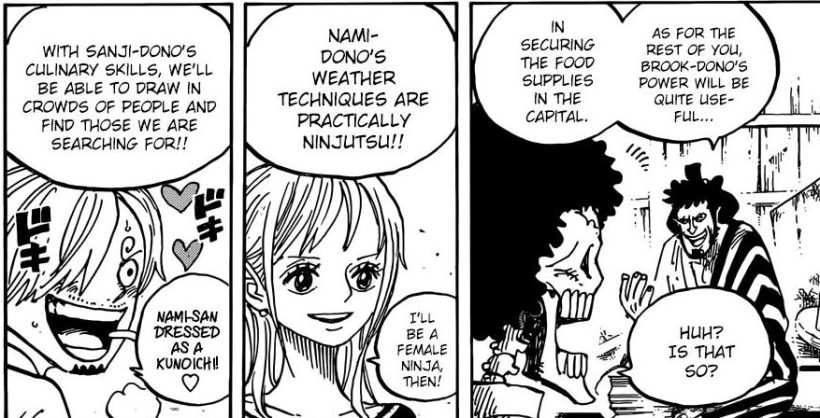 Regarding the Kunoichi, I am starting to feel that with Oda-sensei spending so much effort equating Nami with a Kunoichi, I don’t believe he intends to have a Kunoichi become the next Straw Hat Pirate nakama. There have been several occasions since Kin’emon’s introduction that he has classified Nami as a Kunoichi. In a sense, Nami can “clone” herself, “hide” herself, misdirect her opponents, summon lightning down to strike her enemies and even “control” other elements. Nami may not be “Kunoichi” in the direct sense but her abilities can be seen as overlapping within what a Kunoichi can do (ninjutsu). That and the amount of times Oda-sensei has labeled Nami a Kunoichi is enough for me to believe that a Kunoichi from the Wano Kuni will not be a Straw Hat Pirate member unless it is a “hybrid”.

Can’t wait to see where Oda-sensei takes this arc. Very much looking forward to the future chapters. And can we find out what is up with that Octopus, I am so curious.