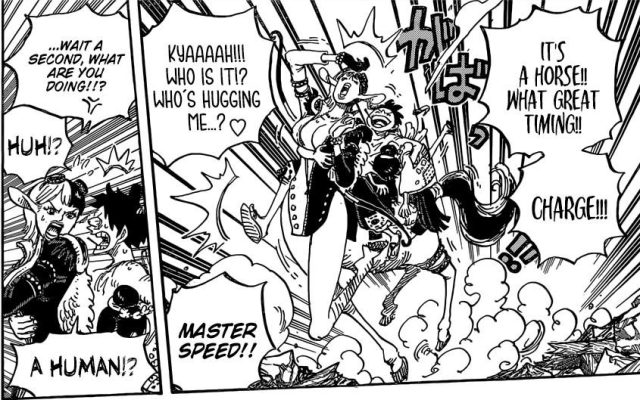 Of course Luffy did that

I expected Speed to be featured in the current battle but not in the fashion that she was. For Luffy to use her as a horse to escape and for her to be made compliant through consuming Tama’s dango, how unexpected, yet how utterly characteristic of One Piece. Not only has Luffy robbed the fresh produce from the Beast Pirates and stolen the fresh water from them to give to the people but he has also embarrassed the Beast Pirates. Luffytaro has made himself a target and with him angering Jack, their meeting has become an inevitability.

I did not anticipate Tama to be such a crucial character within this arc but after her actions against Speed, it has become clear that she is a very important character within this arc. Against the Beast Pirates, whose Devil Fruit users are half beast, her dango ability has immense application in balancing the scale for the Straw Hat Pirates. She can quell the negative emotions within an animal towards her in positive emotions once they consume her dango made from her body by her Devil Fruit. As Speed displayed, no matter how antagonistic one is toward Tama, once they eat her dango, they instantly become obedient. How will such an ability be utilised by Nami to fracture Kaido’s army and induce panic within the Beast Pirates. If the ability is effective against opponents of Headliner status, could they work against the Disasters/Calamities? Somehow its effect extending so far would be detrimental to the nature of the story. If it does work, its effect would be heavily reduced against such powerful opponents. Nami would truly have some sinister ideas of how to use Tama’s dango to throw the Beast Pirates in disarray similar to how she utilised Zeus when on Wholecake Island against the Big Mom Pirates. Being able to pacify angered Zoan Devil Fruit users would even come in use beyond this arc – I wonder if the Straw Hat Pirates will take a few dango with them when they leave the Island.

Law should be used to Luffy’s tendencies by now

Law didn’t want the alliance to be found out, yet they were. Law didn’t want Holdem defeated in fear of attracting Jack, yet Holdem has been destroyed and Jack is on his way to Kuri. Law did not want to draw attention to themselves, yet Luffy has expressly made himself the current primary target on Wano Kuni. Try as hard as he can, Law cant stop what has already been set in motion. All Law can do is be caught up in the events and be swept along with Luffy’s intentions. 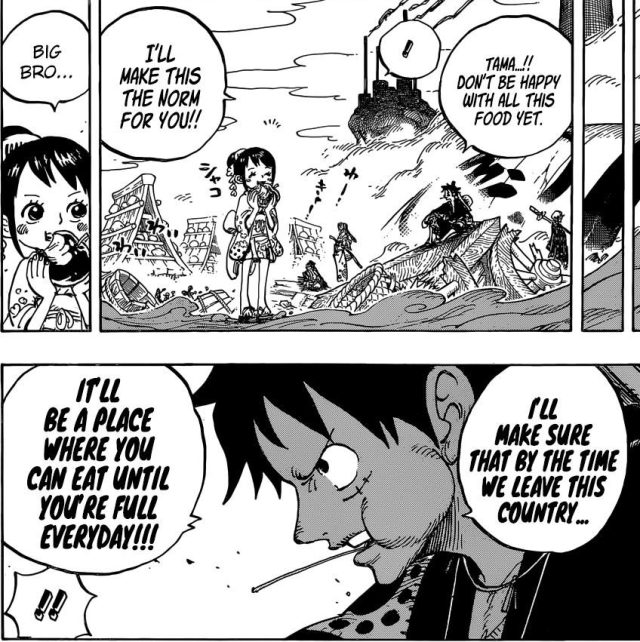 I still believe Tsuru is related to the Kozuki clan, in particular, I believe she is Momonosuke’s mother. Tsuru knows too much about the history of Wano Kuni and the way she expressed the history of Wano Kuni, there is more to her than just being knowledgeable about the past, she has a stake in everything. Answers may be revealed when Luffy visits the ruins of the Oden castle. One of the Kozuki family members gravestone marker has their first name obscured by the SFX text in the chapter. Could that name be Tsuru or the real name of Tsuru? Looking forward to the next chapter.