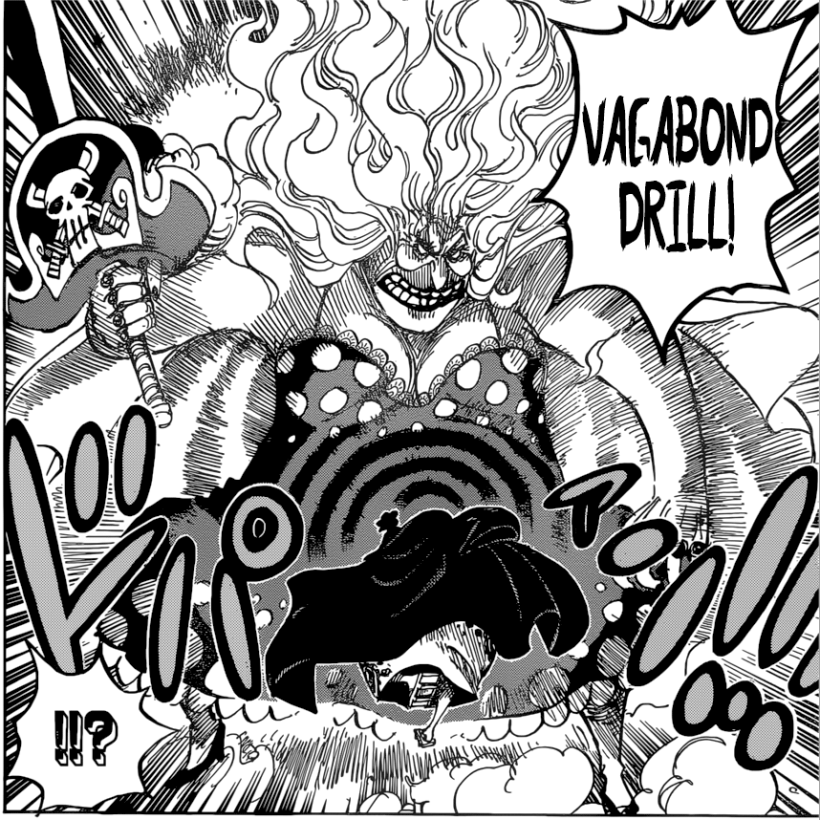 If Jinbe were not there, I don’t believe the Thousand Sunny would have survived Big Mom’s onslaught, an onslaught driven by a maddening craving. Jinbe tries to rationalise with Big Mom but ultimately Big Mom falls back onto the lies spun onto her and continues her assault on the Straw Hat Pirates. Jinbe’s feats in this chapter were impressive; he managed to block Big Mom and Napoleon’s attack, drench Big Mom in water causing Prometheus’s flames to weaken and land a solid on Big Mom that forced her off the Thousand Sunny. Thanks to the focus Jinbe has been getting recently, we are beginning to see how relevant he can be as the Straw Hat Pirates continue their journey across the New World all the while targeted by the Yonko and other shadowed powers.

What a tank Jinbe!

Brook continues to impress me, on top of all that he has achieved in the current arc, he still continues to be a counter to Big Mom’s power, even if only fractionally. Alongside Brook whom split Zeus in two, Nami utilises the opportunity to force Zeus to discharge by using her Static Electricity Black Ball. Taking Zeus out and buying a few precious seconds to escape with Big Mom zapped, the Straw Hat Pirates without their main heavy hitters illustrate how resourceful they can be when their join together to fight.

Expectedly, Big Mom is still standing and more enraged now. Zeus has been reduced to his weakened state and now finds himself on the Thousand Sunny in the hands of Nami whom once again offers Zeus the chance to become her slave (poor Zeus). With the exposition Nami and Zeus have gotten in the current arc, will Zeus join up with Nami? Will Oda-sensei have Zeus join with Nami? There is no denying that Nami can bring out the abilities of Zeus and if she does have access to Zeus, her fighting style will evolve once again toward a very fascinating direction. Nami would be able use Zeus for air battles and discharge her electric attacks on a more powerful scale. I am not against this idea, in fact I am excited at the very possibility.

Not even a Yonko can react to Brook’s speed during that attack, how cool

It is only a matter of time before Sanji arrives with the Wedding Cake and Luffy blast through mirror world with a defeated Katakuri. As enraged as Big Mom currently is, she has no idea what her inevitable fate is, none of the Big Mom Pirates do and it is going to be exhilarating to see their consuming arrogance turned on its head when finally they realise what is happening. Looking forward to the next chapter.