One Piece Chapter 870 – In Order To Escape 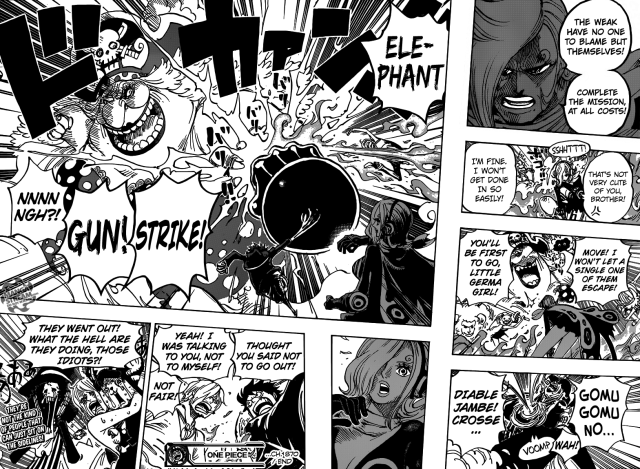 Hell yeah, I was hoping this would happen!

The Straw Hat Pirates have achieved all their objectives save escaping, but they have one loose end left to tie up and that is returning Big Mom’s “generosity” right back at her. From abducting Sanji (he wasn’t given a choice) to imprisoning the Straw Hat Pirates to attacking them to attempting to kill the Vinsmoke family, Big Mom has a ton to answer for. The suffering of Capone Bege whom was sheltering them from Big Mom’s attacks only served to fortify their resolve of taking down Big Mom. With the plan now scrapped, it looks like the incoming Straw Hat Pirates VS Big Mom Pirates conflict is all but inevitable in this arc. Luffy will be battling Big Mom and Sanji will be getting an opportunity to be highlighted in battle against a tough opponent. Jinbe, as the upcoming Straw Hat Pirate recruit, will likely also have the chance to showcase his capabilities.

The Tamatebako is still in play and as long as they remains an element within this arc, you cannot count the Straw Hat Pirates out from upsetting the world order again and creating a massive splash that will have substantial effects as the waves ripple across the New World. Explosives have been placed within the Tamatebako, but currently, it is unclear how powerful the explosives are and how much damage it would cause by opening the box. All we know is that powerful explosives were placed inside to stop anyone foolish enough from stealing the Tamatebako. At the very least Big Mom should take some damage if exposed to the explosion. 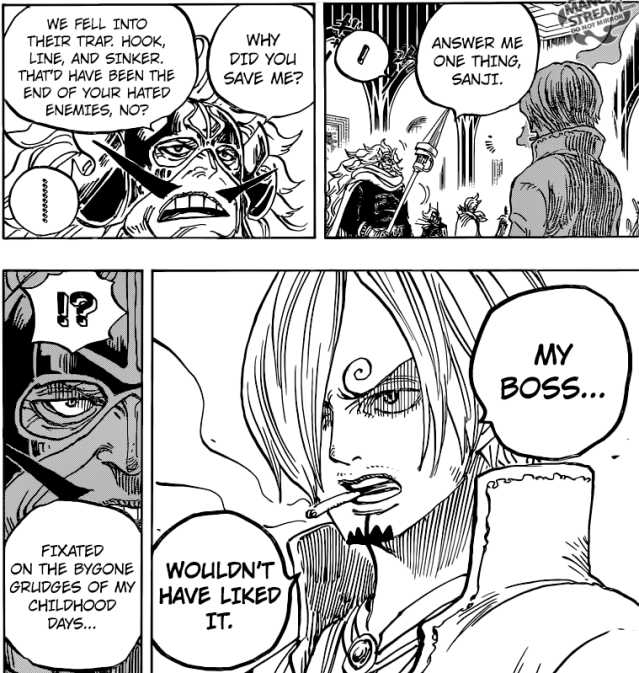 Even though Zeff isn’t directly in focus this arc, I love the coverage he is getting indirectly through Sanji

Judge finally understands how blind he was having fallen hook, line and sinker for Big Mom’s deception. In addition, he acknowledges Sanji having seen through the plot and saved their lives. Despite the concluding words shared between the two, Sanji accepts who his family are and Judge seems to finally have accepted the situation he himself has created. To take on the burden of carving out an escape for Sanji and the rest, Judge realises how much he owes Sanji and his friends. Judge, doesn’t believe he can win against Big Mom but as someone who has had their life saved, he understands he owes his saviors for that. Hopefully with Judges’s eyes open and having accepted to leave North Blue alone, he makes amends for what he has done and at least attempts to repair his relationship with Sanji. Sora fell in love with Judge and I doubt it was the men Judge currently is. There IS a soft and compassionate side to Judge! Sanji would also be willing to give Judge and his siblings a second chance, which is currently why after telling Judge to stay away from him, he exited Capone to defend his family from Big Mom. His boss, Zeff, obviously would oppose him doing nothing. 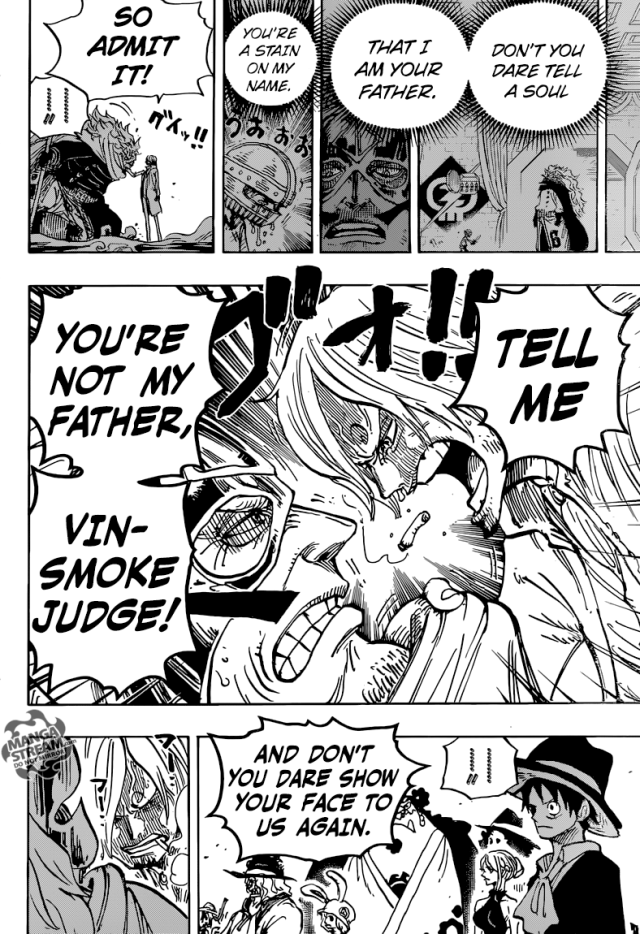 I not sure what changed over the years, but deep down Judge seems regretful over the words he expressed “that” day

The Germa are incredibly intriguing and I would love to see more coverage of them in the story, particularly as allies to the Straw Hat Pirates. If Judge can repair his relationship with Sanji, Sanji may have the opportunity to redefine how he see’s and interacts towards his siblings. It would also help to adjust how he is treated by his siblings from being perceived as the failure to potentially being accepted for who he is (Reiju already accepts and treasures the brother she has). The Germa would be a significant ally to have for the Straw Hat Pirates plus they would be the perfect faction to host Caesar after the events in this arc are over. There is no chance Caesar is going to be set free to continue his inhumane experiments. Events will force Caesar into another unfortunate circumstance or Caesar may just choose to join the Germa once he realises who Judge is and the scientific equipment the Germa have not to mention the scientific feats Judge accomplished. I very much would be interested to see what two former colleagues of Vegapunk could accomplish if they work together. Add Franky and Usopp into the mix and we may get some upgrades to the Thousand Sunny and/or Usopp’s weapons. I also wouldn’t mind seeing Sanji’s given his own Germa suit to enhance his combat capabilities.

The way the arc is developing, it seems likely that Big Mom will be defeated by the end of this arc by the Straw Hat Pirates and allies. No matter how wide the gap in power between Big Mom and her opponents, Big Mom’s relevance as a major antagonist will not continue into a further arc. Substantial focus has already been given to her to warrant additional coverage in a future arc. The two questions that do remain are; how will Big Mom be defeated? And how will Big Mom find out about what happened with Mother Caramel. In order to reach those answers, I believe both the Tamatebako and Pudding are key. The Tamatebako has currently fallen from the roof of the tower and Pudding is presumably still on top of the tower, so it should be exciting to see how Oda-sensei scripts the coming events to incorporate those two elements leading up to Big Mom’s defeat. Looking forward to the next chapter.