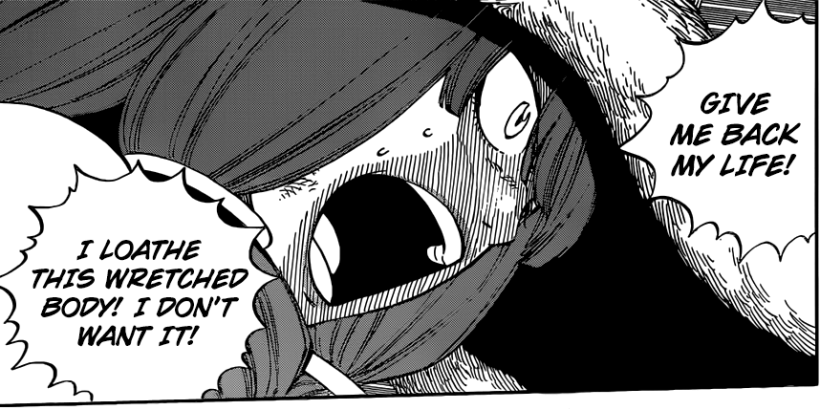 Surely, there must be a way to reclaim ones humanity once transformed…surely…

The fate of the Dragon Slayers leads to an end scorched in chaos and lamented by torment as the doomed plays spectator to their vanishing humanity powerless to prevent. With the essence of the Dragons coursing through them, the overwhelming Dragon presence within each Dragon Slayer eventually consumes them transforming the bearer into a Dragon with their human sides lost within the maelstrom of rage. The only way past that fate is to silence the Dragon essence within through the use of a power even more overwhelming – with the essence of a Dragon seeking to protect them from being consumed.

It really is tragic and sorrowful the fate which befall Irene. She held such a strong desire to protect the peace and coexistence of Dragons and Humans that she put her own humanity at risk to fight alongside the Dragons for humanity. After all the pain, blood and death, all that awaited her was the fear of the citizen’s and their narrow-minded judgement sentencing her to a life of pain, suffering and despair. Irene didn’t have anyone there to try to understand her, she didn’t have a friend to lean back on when the world broke her down, she didn’t have a “Fairy Tail” to step in and accept her up when the world around her rejected her. All she had was the love for her daughter and the immense desire to protect her at any cost. Irene forsake everything for that desire. What three years worth of beatings, torture and humiliation couldn’t achieve, a moment of her daughter’s life in danger did. That moment beckoned Irene to embrace the Dragon essence within.

Irene wants to feel like a mother again but her heart and emotions have become so numbed and frozen that reminiscing about Erza had no effect on making her feel again. Still, deep down, within Irene’s soul, I believe she still has the capability to love and feel. I strongly believe in this. This is why I hope through this battle Erza and Wendy are able to reach deep within Irene’s heart and make her feel the warmth of life again.

Natsu is undergoing a similar process with two seeds within him beginning to fuse. Igneel was able to halt the corruption of the Dragon Seed by sealing his essence within Natsu but unbeknownst to Igneel, a second seed, the Demon Seed, existed within Natsu before he began to use Dragon Slayer magic. The essence of Igneel was unable to keep the Demon Seed at bay and now as a result, both the Dragon and Demon seeds are beginning to fuse into something unknown. Consequently, the fusion of the two seeds is slowly killing Natsu. Given that Lucy is being built up as Natsu’s savior, will Celestial Spirit magic come into play as being an answer to cleanse the corruption of the Dragon and Demon Seeds? Or will the answer rest in the unconditional love another has for the affected?

What will be the result of their fusion?

With it now confirmed that there exist a ‘Demon Seed’, do the users of Devil Slaying Magic have such a Seed growing inside them as well that is slowing corrupting them the more they use it? If so, can we expect Gray to feel the effects of using his Devil Slaying Magic anytime soon? What about God Slayers? Do they have a ‘God Seed’ growing inside each of them as they use their God Slaying magic? If this is not the case, why do Dragon Slayers have Dragon Seeds? And what other types of Slaying Magic exist?

With Irene enchanting her consciousness onto Wendy, will she finally experience the sense of feeling again? And will she finally remember the love she held so deeply and strongly for Erza and come to realise the love Erza has for her? As for Wendy, can she help Irene realise what deep down is important to her? Magic has the capabilities of creating miracles and through the love connecting people, I believe we will get to see another miracle again. Very much looking forward to the coming chapters.