[Analysis] One Piece – When Will Big Mom Be Defeated?

Big Mom and the other Yonko were foreshadowed years ago but it was only until the Fishman Island Arc that she began to become relevant when it was revealed that Charlotte Linlin is the one “protecting” Fishman Island. By the end of the Fishman Island Arc, Big Mom became an immediate threat with Luffy challenging Big Mom and declaring his intention to defeat her and take Fishman Island from her.  It took around 5 years since her relevance to Fishman Island was revealed for the story to shift focus onto the Big Mom Pirates and Big Mom. With the story finally in an Arc centered around the Big Mom Pirates, will we see the defeat of a Yonko before the end of it? Or will Big Mom continue to remain relevant as a major antagonist after the conclusion of the Totto Land Arc?

Given the nature of the arc (rescue arc) and how half the Straw Hat crew is missing, it doesn’t seem right for a major antagonist to the Straw Hat Pirates to be defeated with only half the crew present. For something as groundbreaking and monumental as defeating one of the four Yonko of the New World, you would assume the whole crew would be present to share in the experience, to be highlighted and featured in such a major moment. Because of that, I find myself reluctant to reject the possibility of Big Mom continuing to be relevant as an antagonist in the future.

This arc does not require the defeat of Big Mom to conclude. With her relationship with Germa 66 on its way to reaching a premature end, the reason for the Germa 66 holding Sanji hostage would eventually disappear. Once the Germa 66 find out/realise Big Mom’s intention of eliminating the Vinsmoke Family once she has obtained the science of cloning, the relationship between the Germa 66 and the Big Mom Pirates would inevitably end. Upon the conclusion of this relationship, there would be no reason for Sanji to marry Pudding. Furthermore, the main objectives of the Straw Hat Pirates can all be achieved without a confrontation with Big Mom i.e. rescuing Sanji and stealing an imprint of the Road Poneglyph within Big Mom’s possession. Luffy even stated that he didn’t come to Wholecake Island to defeat Big Mom, he is there right now to get Sanji back. Although, if Big Mom wants a fight with him, Luffy also did state that he is ready to take her on. The Totto Land Arc may just end with the Straw Hat Pirates taking Sanji back once the Germa 66 and Big Mom Pirates relationship ceases and escape with the imprint of the Road Poneglyph within the chaos. Big Mom’s defeat may well be saved for a future arc when the whole Straw Hat crew has gathered.

Additionally, with Cracker defeated and the other two remaining Sweet Commanders seemingly being set-up to be defeated (by Sanji and Jinbe), it doesn’t seem like Oda-sensei is holding the Big Mom Pirates back for a future Arc. If Big Mom’s main subordinates are defeated this arc, what value will there be in bringing the Big Mom Pirates back in a future Arc to serve as antagonist? Sure, we haven’t seen all of Charlotte Linlin’s children yet, but not all of her children agree with her and end up becoming part of the Big Mom Pirates, so the defeat of her crew wouldn’t completely remove the relevance the Charlotte Family can have within the story. Even without the presence of Charlotte Linlin as a major antagonist, stories about the Charlotte Family can still be relevant i.e. a movie focused around one (or several) of Big Mom’s children. As result, with each Big Mom Pirate defeated, especially the Sweet Commanders, the chances of them remaining major antagonist in the future decreases. 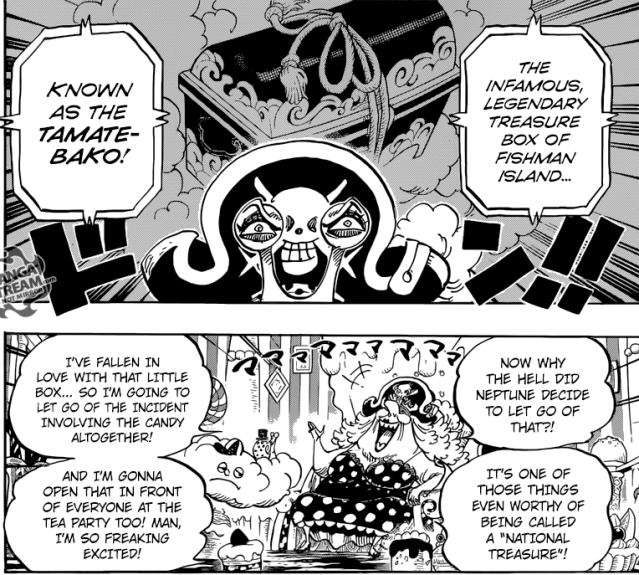 Lets not forget about the Tamatebako that Big Mom plans to open in front of everybody at the tea party. At the moment Big Mom has no immediate intention to battle Luffy but once she opens the Tamatebako and receives her surprise, she will no doubt enter into a rampage and target Luffy.  The Tamatebako in One Piece is inspired by the legend of “Urashima Taro” where Urashima was gifted with a box (the Tamatebako) by Otohime as a parting gift once he left Ryūgū-jō (Dragon palace castle) which he was told never to open. When the Tamatebako was finally opened, the 300 years worth of time/age that was stored within the box while Urashima was in Ryūgū-jō was released. The released time/age transformed Urashima into an old man. If the Tamatebako functions similar in One Piece as in the legend, we may very well see a substantial amount of “life” released once the box is opened. The “life” won’t be from the contents of the Tamatebako but from Big Mom who would have taken the damage point-blank from the powerful explosives filled inside the box meant to explode once the Tamatebako is opened. A portion of the fragments of soul Big Mom has consumed with the use of her Soru Soru no Mi should escape in this moment subsequently weakening Big Mom in the process. A Luffy VS Big Mom battle will likely proceed given Big Mom’s quick to anger personality. While it is arguable that the current Luffy may not be able to take out a fully powered Yonko, his chances dramatically improve when that Yonko is in a weakened state which Big Mom will be in.

The surprise within the Tamatebako

The Tamatebako has been foreshadowed for so long not to be dealt with in this arc. Big Mom will be weakened once she opens the Tamatebako and she will come after Luffy in a rage. If Luffy is forced to fight Big Mom to escape, he will. Additionally, with Jinbe there, Luffy will face off against Big Mom to liberate him from her crew and steal Fishman Island away from her as he declared in the process. It wouldn’t make sense to delay those story elements for a future Arc once Big Mom and Luffy are already engaged in a fight.

As a result, I believe by the end of the Totto Land Arc, Big Mom will be defeated and Luffy will have claimed Fishman Island as his territory. The focus is currently centered around the Big Mom Pirates within their territory, so there is no better time to have their story dealt with. Once Big Mom is defeated, I am interested in finding out what will happen to her. Will she be captured by the Marines? Ryokugyu perhaps? Or will it be an antagonistic third-party?

>>The Objectives On Wholecake Island