The path to grow isn’t one decorated in fortune and luck, it is one supported by the struggles, pains, and lessons endured

What is a hero? What do they embody? What do they signify? As cliché as it sounds, as childish as it sounds, as absurd as it sounds, there is something so deeply empowering about that word. Understanding your goal and having a path which you are centered on. Striving forward with full knowledge of who you are. Unconcerned about the fear of uncertainty and trying. Recognising where you stand and the person who you aspire to be. Continuously. With clarity. The word “hero” resonates with it a freedom and expressiveness we all wish to experience. Boku no Hero Academia delves into that concept and through its character and the story unfolding around them, we as readers find ourselves inspired and compelled by their pursuit towards becoming heroes.

Not only is Boku no Hero Academia a story about heroes, it is also a story about the villains and their journey. The line distinguishing good and bad is not easily recognizable here, both the heroes and villains pursue paths and hold ideals that pits them against one another but their end goals to a certain extent overlap and relate. The villains serve as the antagonist but categorizing them as merely being ‘bad/evil’ is a shallow interpretation of their significance and a disservice to the writing of Horikoshi-sensei. Horikoshi-sensei has taken the effort to focus substantially on the villains and incorporate human and relatable elements within each of them, evolving them from characters serving to highlight the protagonist and into characters to develop alongside the protagonist. Just like the heroes and those aspiring to be heroes, the villains are guided by an overriding purpose and goal. A purpose serving as a foundation for their journey. 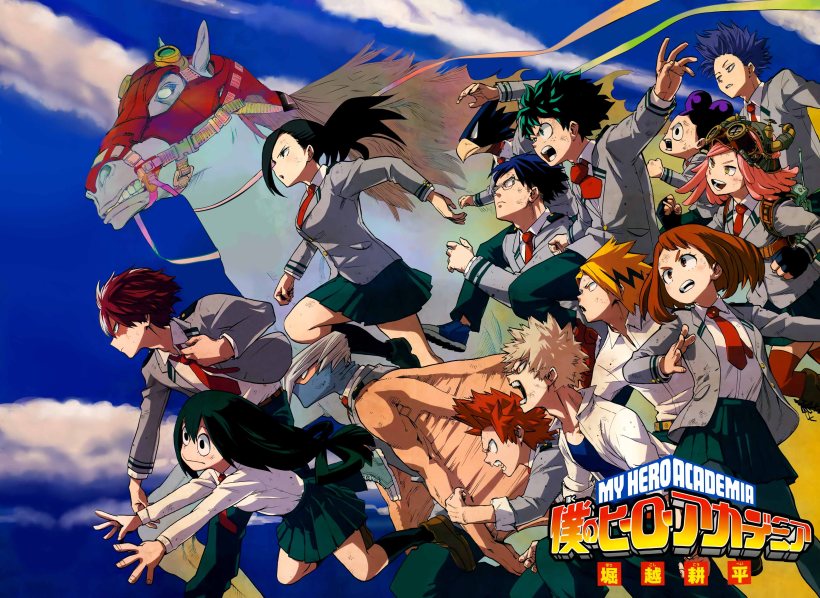 Galvanize you resolve and continue forward!

Throughout the manga, the grey area is challenged; the heroes are questioned, the thinking surrounding villains and what they represent is reevaluated, and the surrounding meaning separating the two sides blurred. What motivates the heroes? What are they driven by? What do they embody? Are the villains really the enemy of society? Why do they fight? What is their “message”? The actions of both the heroes and villains come under the scrutiny of the public. More so the heroes as they are employed by the government to serve and protect the public. Through the actions of the villains and those opposing the current heroes, the public questions whether the heroes deserve their title. Whether over time the meaning of the word “hero” faded into obscurity and whether the heroes themselves are holding their actions and intentions to the same standard the public feel the title “hero” conveys them as having. It is this questioning and exploration into the grey that gives weight to both the heroes and villains.

The villains are trying to open the eyes of the public to the true face of “heroes” and the heroes are trying desperately to convey to the public they are there for them and not their own interest. The efforts of the heroes to earn the public’s trust leads to the current excitement within the story where the future “heroes” are built from ground up. Right from high school, those aspiring to be heroes are taught and tested in ways that help reveal their true capabilities and assist in fostering their motivations for continuing to pursue the path they have begun on. The help of real heroes serving as their teachers and situational lessons that reflect real life circumstances play a massive part in developing the students into the heroes that will support the society and peace within the future. Each lesson serves as a step the students take towards their desire to become heroes.

While tremendously enjoyable, there was a moment in Boku no Hero Academia where I found myself losing excitement in regards to what was happening. It was during the time when the students were hosted by one of the heroes (after the Sports Festival Arc). Gran Torino, the hero who hosted Midoriya, I just couldn’t bring myself to care about his character or even muster the required amount of energy to endure his presence and continue with the story. All the interest I had accumulated over the past chapters had dissipated against the lacklusterness of Gran Torino’s character – I didn’t find him funny at all even though he was presented as a humorous character. Gran Torino felt superficial to me at that point. This is why I ended up putting Boku no Hero Academia on hold for about ten months. This time though when I picked it up again, I managed to endure and my goodness, the Hero Killer Stain portion of the arc which began in the very next chapter since putting the manga on hold was amazing. It was only during All Might’s battle against All for One that I came to like Gran Torino’s character. I found him to be genuine in those moments, a character with depth and a story. It was at this time that my perception of his character changed, which I am grateful for as I did want to like Gran Torino.

There was another element, a very particular one, that did contribute to my diminishing interest. It was the treatment of Momo Yaoyorozu. Firstly, she has a spectacular quirk that has such a fascinating potential but it is so grossly under utilised. Secondly, why is she so forgotten when she is one of the most capable students in the class? Momo may not possess the same battle instincts as some of the other students, but in terms of thinking on her feet and utilising her quirk to create opportunities within a situation, she has massive potential. The tactical mind that she displayed during the End of Term Test Arc against Aizawa-sensei conveys just how adept she is as a hero, one who understands the characteristics of her quirk and its intricacies. The practical use of her quirk creates such an intriguing foundation with which to build her up into a Pro Hero. It leaves me in state of confusion as to why we haven’t seen her feature more strongly in the major battles against the Villains. Thirdly, I just can’t get behind her hero name – “Creaty/Creati”. It just doesn’t sound right or very heroic on that matter, unless it sounds cooler in Japanese. “Genesis”, “Formation”, or even “Creation” sound so much more heroic. I hope Horikoshi-sensei puts more thought behind her Hero name in the future.

I’m glad Horikoshi-sensei gave Momo significant coverage during the End of Term Test Arc dealing with her self-esteem issues but since then, her battle coverage has been selective. I understand that due to the large cast, he is juggling across the many students to focus on, so I will wait patiently until the moment Momo gets her chance to shine again in battle.

Surpass your limits and even further!

Overall, while I did have some issues with Boku no Hero Academia, they were minimal at best. The stories of each character driving the larger story creates a compelling experience that is hard not to become excited by. You fall in love with the characters, you become intrigued by the story, you are left thrilled by the battles, and you find yourself appreciating the value of a hero. As for what makes a hero, it is a question each of us have to answer each day with the actions we take and choices we make.