One Piece Chapter 848 – Breaking Into The Treasure Room 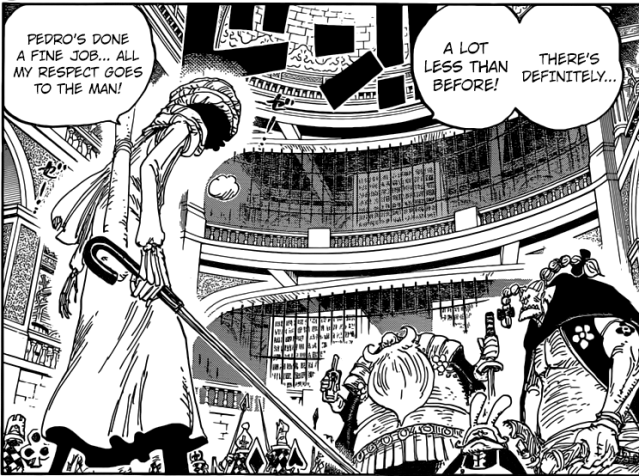 The plan continues into the next stage

Okay, I don’t get Pudding, what is Oda-sensei planning with her? Was she really innocent and genuine? Are there no ulterior motives behind that cheerful smile of hers? Were the tears she shed really ones conveying her resolve to change the dark outcome about to result if she chooses to do nothing? Is Pudding really serious about going against Big Mom and destroying the very plans her mother has set-up? I just don’t get it. I don’t see Pudding dying yet but I am very curious to see what Oda-sensei has planned for her during the remainder of this arc.

Sanji is equally as puzzling this arc. After what happened at Enies Lobby, Sanji should be fully aware of the extents the crew and Luffy would go to if it means saving/protecting a fellow nakama. Luffy made the World Government his enemy in order to save Robin, Luffy broke into Impel Down and then cast himself into the Marineford War in order to save Ace. Based on those actions it was obvious that once Big Mom took Sanji that Luffy would react by challenging her. Sanji should know this, Sanji should definitely know this. Sanji should know that there was no way Luffy would abandon him, that Luffy wouldn’t not at least make Big Mom his enemy to save a nakama that he considers the best chef in the world. But here we have Sanji actually comforting his fears by concluding that since Big Mom is ready to let Luffy and Co. go that Luffy himself will fold and follow along. Does Sanji really believe this? If only Zoro was there to smack some sense back into him.

I want to believe in Pudding’s character, that she is who she appears to be, but things can’t be that simple can it? Pudding is too kind-hearted and pure, especially when looked at in the context of this arc and that is why her character feels strangely out of balance. She would make for the perfect wife, so if Sanji decides at the end of this arc, not to go with someone who likes him and wants to be with him, he will be a massive idiot. But if Sanji chooses to marry Pudding, what will happen to the story then? It is a given that Sanji will rejoin the crew and will be there until the end of One Piece, so him marrying Pudding will mean him taking her along with the Straw Hat Pirates and that would feel be out of place (leaving her in Totto Land is not an option). The reason this would feel out of place is because Oda-sensei has given minimal develop to showcase Pudding as a pirate and more importantly as filling an important role within the Straw Hat Pirates. Additionally, Pudding does not match the brand of crazy the rest of the Straw Hat Pirates add to the crew. What gets me even more is why is her third eye still being hidden? If Pudding was as innocent and transparent as what is currently being made out to be, why didn’t Oda-sensei introduce Pudding with her third eye revealed? Why has he kept it hidden all this time? Why has he kept Pudding’s official introduction on hold for so long? Surely, the reveal of her third eye will signal an important development. Does Pudding have a split personality disorder or something?

In order to become her own woman

If Pudding is who she is currently shown to be, the most logical course of action would be her becoming a close ally with the Straw Hat Pirates (she won’t die). Just like how Sanji and Violet ended up becoming close friends, so to will Sanji and Pudding become close friends. Pudding has taken inspiration from her memories of Lola and the decision Lola made to take her own fate into her own hands, Pudding now has resolved to do the same and make an effort to pursue what she believes is right. Because of this, I want to believe in Pudding, I want to believe that she is now finding strength to stand up to her tyrannical mother but I can’t say I don’t have my reservations about her character and some hidden agenda at play. I hope my concerns are wrong and that there isn’t some dark movements in the background.

The Soul King has arrived!

Pedro surprised me, I knew he was strong but he is performing better than I expected. Sure, he hasn’t come across any of the Big Mom Pirates main members yet, but he is serving the part as a distraction extremely well. He baited Baron Tamago and the rest quite superbly. Brook in turn is showcasing just why he is called the Soul King and as expected, his Yomi Yomi no Mi is acting as a counter to Big Mom’s Soru Soru no Mi. It’s ridiculously cool to see Brook finally showing what he can do to the Big Mom Pirates members who were inanimate objects before having fragments of a soul placed into them. He serves as a perfect counter to them. With the Barbarian Chess Soldiers down, Brook will now have to deal with the few remaining members locked inside the Treasure Room with himself. I am very excited to see what Brook has in store for those Big Mom Pirate members. Looking forward to the next chapter.

This entry was posted in One Piece and tagged 848, Brook, Eiichiro Oda, Luffy, Manga, One Piece, Pedro, Pudding, Sanji. Bookmark the permalink.