One Piece Chapter 840 – The Vinsmoke Children

The hidden past of Sanji is finally being revealed, one which explores not only his ‘I will not kick a woman, even if I die’ stance but his love for cooking, kind heart and desire to be more than what his father demands of him. Not only is Vinsmoke Judge an old associate of Vegapunk but Judge has also improved the bodies of his five children to make them more than human, to make them leaders possessing grand power destined to pave the path forward for Germa 66. 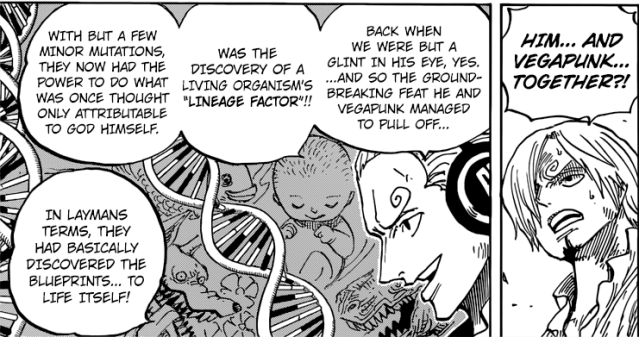 So Judge and Vegapunk once worked alongside each other

The scientist in the group, including Vinsmoke Judge, fled. Judge was able to get away with the research on cloning and after carrying out his own research and experiments, he managed to successfully create human life. Thanks to that, he was able to develop the Germa 66 army; soldiers loyal, unflinching, built for combat and totally expandable and replaceable. For a 20 year old soldier to be created, 5 years is needed to grow and develop them. On top of his research in cloning, Judge also experimented on human body improvements. Judge himself commented on his children being his greatest accomplishments. Based on their speed, strength and reactions, their bodies and genes were modified. Plus, given the metallic nature of Yonji and Niji’s faces, my guess is part of their bodies have been changed into cyborgs. I am not sure if Reiju underwent the same modifications, as when Sanji’s failures were being discussed, the context was isolated to the four boys. Although, given Reiju’s capabilities, beyond being exceptionally super human, her genes were most likely also modified.

Sanji’s past is much more traumatic than I would have expected, for him to be treated so abusively at an early age, it is amazing that he still ended up retaining his sanity and morals. When Sanji met Zeff, it wasn’t apparent that Sanji had suffered such a terrible past but given Sanji’s chivalry, it did become apparent that before Zeff, there was more to Sanji’s past than we knew. Still to be hated by his family and even imprisoned to be forgotten, what utter cruelty. No wonder Sanji wanted to forget about his past.

I’m glad not all of Sanji’s siblings are cruel, Reiju definitely does care for Sanji

I am honestly ecstatic that I was completely wrong about Reiju. It was actually Niji who beat Cosette. Reiju in the flashback revealed her regret in not being able to help Sanji. She apologised for not being able to do anything and revealed her fear of being bullied if she did not act along. With Reiju being the second exception, well third if you include Sanji’s mother, it will be interesting to see what Reiju does in this arc. She has already saved Luffy. Chances, she may have helped Sanji escaped his imprisonment in he past when she found out the truth about what get father was doing to him. Unlike the rest of the siblings, Reiju cared about Sanji.

With the history of the Vinsmoke family, Sanji has a very real path towards powering up and improving his abilities/capabilities. Sanji had not awakened his genes in the past like his brothers and given what we have already seen of Sanji throughout the manga, it doesn’t seem Sanji’s modified genes have been activated yet. At the very least he hasn’t developed a body like his brothers yet.

Very interested to learn more about Sanji’s mother and Reiju and Sanji’s relationship. Sanji most likely got his chivalry from the females in his family. In the environment he grew up in, surrounded by hatred, it was the female members of his family that treated him with kindness – based on what we know, Sanji’s mother was kind and despite laughing along with her brothers, Reiju was sorry she couldn’t do anything to help Sanji.

The more we learn about the Germa 66, the more it becomes apparent that Sanji can’t really do much to change his fate if he wants to avoid any of his loved ones from meeting an unfortunate end. It does seen like Luffy will need to stop Big Mom to diffuse the marriage situation. Without Big Mom backing the Germa 66, Sanji’s marriage to Pudding means nothing to Judge. Would Judge let Sanji go in such a situation? Looking forward to the next chapter.

This entry was posted in One Piece and tagged 840, Eiichiro Oda, Judge, Manga, One Piece, Reiju, Sanji, Vegapunk, Vinsmoke. Bookmark the permalink.