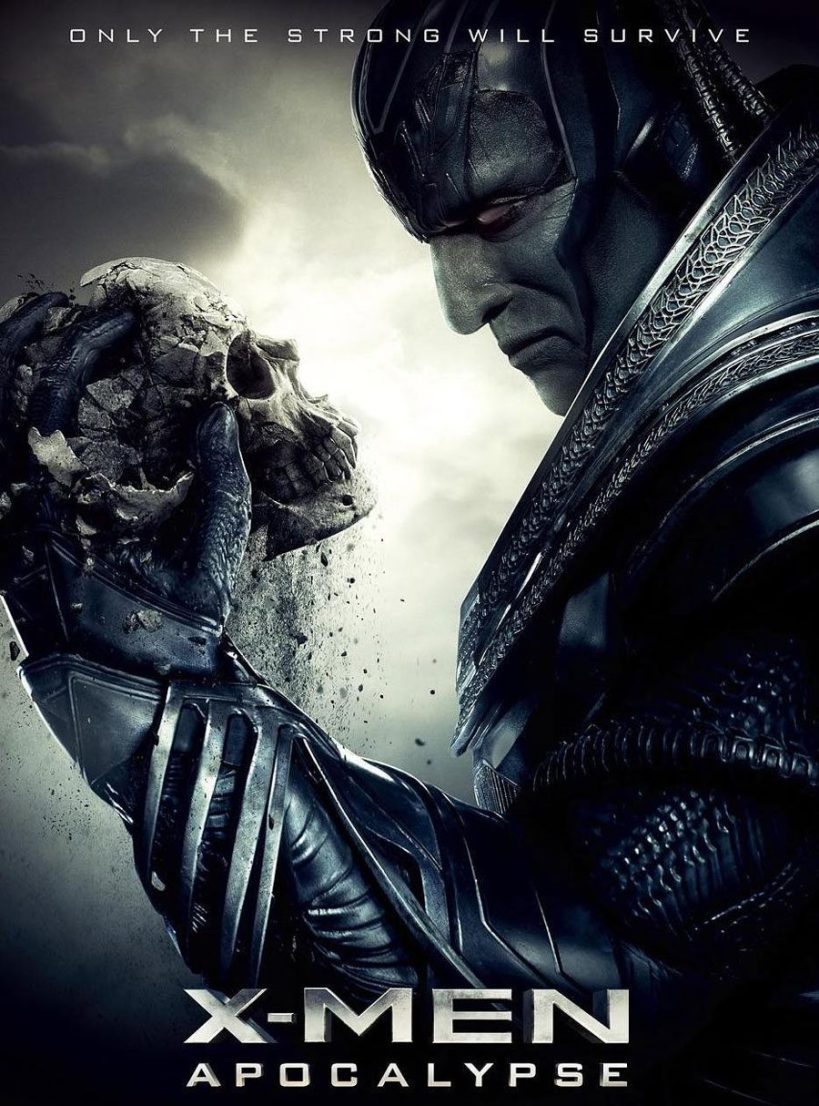 Sadly, Apocalypse displays more intrigue in this poster than the film

With the existence of mutants now known, the tension between those without abilities and those with mutations fractures into a divide filled with discrimination and fear. Those with mutations fear the treatment they will suffer at the hands of non-mutants if the truth of their difference were to be revealed and of the monsters they will have to become in order to survive. In fear of others and themselves, they hide. Non-mutants, in fear of those with abilities, develop countermeasures to protect themselves. With this widening divide forcing those with mutations to live in the shadows, the sight of this reality offends the very first mutant, Apocalypse otherwise known as ‘En Sabah Nur’, now awakened from his coma-like state of suspended animation thanks to the efforts of his followers (who believe him to be a God). Coming to terms of the reality of the time, of how mutants have become overshadowed by the weak, Apocalypse resolves to wipe clean the slate of the worlds image and rebuild it again into one ruled by himself and his mutant ‘children’.

The introduction to the film was quite exhilarating; despite the power Apocalypse held there were a few brave enough to meet his rule of terror and grandeur with rebellion. Apocalypse had used his abilities to entrench himself into the imagery of a ‘God’ and continued his succession through the use of an unknown technology that allowed his consciousness to be transferred into another mutant host thereby prolonging his existence. Those in disagreement of his ways, intentions and ideology carefully waited for this opportunity when he was in his most vulnerable state and launched an operation to interrupt the transfer and bury him forever. While Apocalypse was buried, it was the actions of his Four Horsemen that thwarted his ultimate demise as they gave their lives to protect and preserve their master. In particular, the Horsemen of Death in this time portrayed by the fantastic Monique Ganderton, was the reason Apocalypse escaped the whole event with barely a scratch. In the several minutes she appeared at the start of the film and the limited dialogue she did get (barely any), she portrayed the position of a Horsemen of Apocalypse more memorably than any of the other Horsemen featured in the film. Apocalypse’s Horsemen should be his arms and legs, his sword and shield, his elite force to clear the way for his dominion, but unfortunately for the viewer none of the Horsemen to follow Ganderton’s portrayal even came close.

Personally, I feel it would have been exciting to have seen more of the past Horsemen given the interesting nature of their abilities (especially Death), but tragically they only served to ensure Apocalypse lived to rise again in the future. The technology Apocalypse uses to extend his life is left completely unexplained. What exactly is it? A mention of the technology’s origins and nature (celestial or unknown) would have helped the viewer understand a part of how Apocalypse became who he is (aesthetically) and how the technology fits in with the time of ancient Egypt. But alas, we are left in the dark on that end just as Apocalypse was at that point.

With his awakening in 1983, Apocalypse becomes mortified by the state of the world and believing humanity has lost their way without him, he seeks to once again rise up as their ‘God’ to cleanse the world and lead it into his glorious future. Before he does that though, he first recruits strong mutants to join him. Regardless of whether that particular mutant believes Apocalypse is the messiah to lead the world into the future, we find out that Storm, Psylocke, Angel and Magneto are to be his next Four Horsemen. Besides Magneto who has a genuine reason for turning to anger and destruction after he is emotionally broken by the ‘fear of the world’, the rest of the Four Horsemen don’t get a fully fleshed out reason or reasons for wanting to follow Apocalypse and destroy the world. Storm is alluded to only follow Apocalypse because she perceives he cares about her. Psylocke joins because of an incredibly flat reason, one which I am struggling to even understand myself. Because Apocalypse could empower her abilities, she was okay with contributing to the worlds destruction – I really hope I missed something in the film. As for Angel, thanks to Apocalypse giving him new metal wings, he joins the team to destroy the world.

Apocalypse can influence and mind control mutants to do his bidding, but given the manner in how the Four Horsemen were recruited, they joined not out of force but through free will. Each of them saw meaning in joining Apocalypse, but beyond Magneto, none of the other Horsemen’s reasoning were explored further, which is a shame as further emphasis on their reason or reasons for following Apocalypse would have helped define some character for each of them.

The antagonists are clearly the weakest aspect of the film, besides Magneto who isn’t actually treated as a complete antagonist, they are one-dimensional, lackluster, underwhelming, boring and forgettable. Storm, Psylocke and Angel desperately needed further room to present their characters in an interesting and compelling way. Focusing on the dynamics between the four Horsemen and how they interact with each other would have been a great place to start adding colour to their characters. Just because the Horsemen are antagonist, that does not mean their personalities have to be devoid of individuality. Individualistic characteristics and quirks add an immense amount of memorability and interest to a character. There is nothing wrong with dark and gloomy but succeeding in portraying that as interesting and compelling takes focus and time to develop.

One of the Four Horsemen of Apocalypse, Psylocke

With Psylocke, her treatment in the film was tragic. She was barely given any room and dialogue in the film to flesh out reasoning and intrigue in the character. Her action sequences as well weren’t memorable enough to inject excitement into her character. And by the end of the film, fans of Psylocke and great writing will be left jaded. Psylocke’s character has so much potential to be great and hopefully with her still in play, we will get to see her again in future X-Men films – potentially an X-Force film which also features Magneto? On a positive note, Olivia Munn was fantastic as Psylocke.

Now Apocalypse, I understand the destruction he wrought was on a massive global scale but when said destruction is void of any tension, meaning and emotion it delves into the realm of mindlessness and utter annoyance. A lot of destruction was actually shown but nothing of importance actually happened. Where were the scenes of hopelessness and suffocating despair as the world witnessed everything humanity had achieved over the past few centuries being brought to ruin in front of their eyes. Where were the civilians praying for a miracle as reality crashed and burned around them. The depth of Apocalypse’s destruction needed to be matched by an equal level of emotion to achieve a disaster the viewer feel they want to invest their emotions into. Neither the destruction nor Apocalypse were elements in the film the viewer was compelled to care about, which is a shame as those two elements were some of the main features of X-Men: Apocalypse.

Not everything in the film is bad, fortunately there are some real stellar moments that make this a worthwhile film to watch. One of which is the immensely thrilling and striking moment of Quicksilver appearing at Xavier’s school and evacuating all the students. The manner in how he appeared and handled the situation arrested the viewer’s attention within the scene’s existence leaving us in awe. It was glorious and is the reason why Quicksilver ended up stealing the show from everybody else. Evan Peters as Quicksilver was fantastic and has just converted me into a fan of the character! Everything about Quicksilver’s character in the film was memorable and entertaining, his quirky nature and humorous personality get you to fall in love with him. Now if only Bryan Singer can do this for the villains in the series.

The focus the younger X-Men received in the film was another highlight of the film. The viewer gets to understand the struggles Scott, Jean, Kurt and Peter (aka. Quicksilver) go through as they are cast into a world that despises their existence only perceiving their abilities as curses. The manner in how each of mutant goes about dealing with their changes and struggles are what gives the viewer an insight into that characters personality. Be it Jean’s isolating nature as she finds it hard to stop reading the thoughts of those she meets or Scott’s fear of the instability of his power or Kurt’s reluctance to harm others or Peter’s desire to meet his father, etc.

On this front, X-Men: Apocalypse is solidly successful. More so than a film about Apocalypse, the film is about the development of the younger mutants and their growth into X-Men. Fortunately for the film, as you are left bitter and wanting for quality villains you are left excited and eager for the future of the X-Men as a team.

One aspect that surprised me in a good way was Sophie Turner. Prior to watching the film, I honestly wasn’t looking forward to Jean Grey much, but the manner in how Sophie was able to translate the struggles of Jean Grey’s character into palpable emotion was extraordinary. I felt for Jean’s character, I understood part of the struggles she was going through learning to control her abilities, and I cared about the development she underwent during the film. Through Sophie’s portrayal you felt the isolation of Jean, the misery and fear that comes with her telepathic abilities, and how she opened up slightly emotionally with Scott as they became more familiar with one another. Thanks to X-Men: Apocalypse I now have a greater appreciation for Sansa Stark’s character in Game of Thrones and the talent of Sophie Turner. Tye Sheridan as Scott Summers and Kodi Smit-McPhee as Kurt Wagner were also amazing. Definitely looking forward to the future X-Men films and seeing how the story of the Phoenix Force in Jean is developed.

Hugh Jackman’s cameo as Wolverine was a nice touch. As much as it was a moment to showcase the savage Wolverine/Logan, it also laid the foundation for Logan’s feelings for Jean. With Hugh Jackson’s role as Wolverine in Wolverine 3 being his last (/cry), it will be interesting to see what happens to the character.

X-Men: Apocalypse is not perfect, it has major failings (the antagonist) but the succeedings in the handlement of the X-Men make this a worthwhile film to watch. And if nothing else, the Quicksilver moments definitely makes seeing this film completely worthwhile.