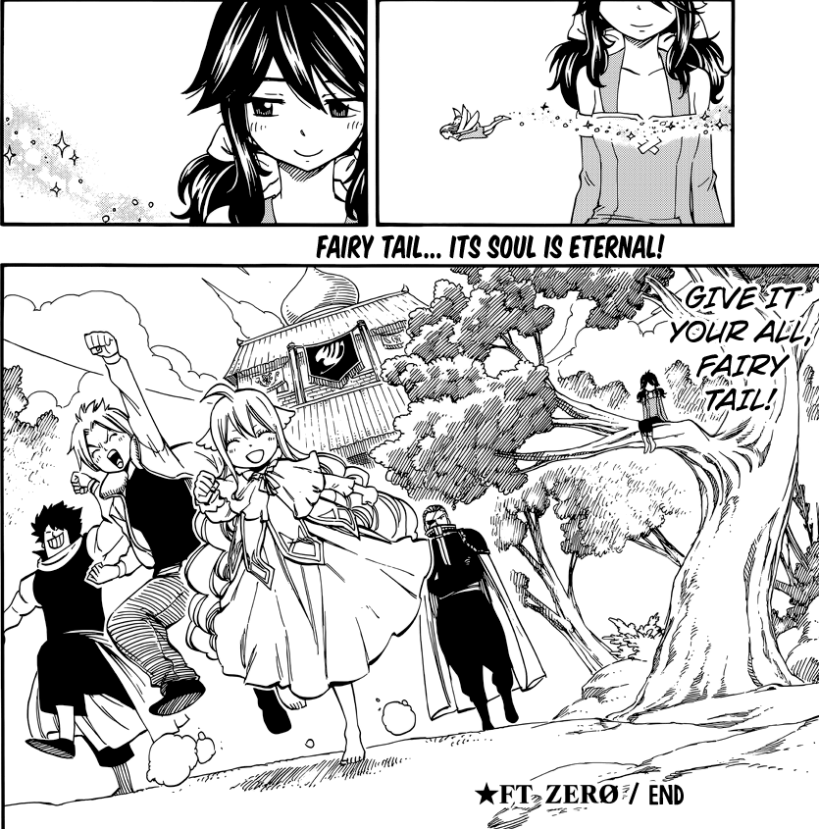 Do fairies really have tails? Do fairies even exist? An eternal mystery. An eternal adventure. The beginning of the spectacular journey known as Fairy Tail starts with the hearts of five individuals (Zera…) looking to birth a guild that values peace and family. A guild where friendship is a relationship formed through more than just words alone. A guild where friends share their hearts. Where they believe in each other unconditionally. Where they have no fear in relying on each other. Where they all have a place to return to. A guild to connect the hearts of one another. Fairy Tail. This is its origin story. A beautiful sad beginning to the wonderful adventures destined to be journeyed.

Right from the beginning, your heart aches for Mavis, the sorrowful and unfair treatment of a young girl only looking to live her life as part of family, together with others. She was enchanted by the magical and fantastical nature of fairies thanks to the short time she spent with her parents. Despite the existence of fairies being a mystery to all, she still believed in them. She lived each day holding onto the desire to see real fairies. Not just enduring, but approaching each day with a positive and grateful mindset. Even after the tragedy that befell Red Lizard, Mavis still approached life from the perspective of positivity. A large part of that due to a close friend. One sharing in the difficult moments together.

Despite her circumstances, Mavis handled it in such a mature and inspiring manner

I significantly enjoyed seeing characters we knew for a long time but rarely got to see get more focus in the story, in particular Precht. The way we knew Precht was as Hades, the guild master of Grimoire Heart, a pitiable man seduced by the origin of magic and the darkness it began as. Before getting to know Precht in Fairy Tail Zero, we perceived him as a villain, a significant antagonist that wrought suffering in countless lives. From the moment it was revealed that Hades was the second Guild Master of Fairy Tail, I found myself wondering just exactly what happened to Precht in the past that caused him to begin down the path of darkness.

While Fairy Tail Zero doesn’t help to answer that question, it does give us a viewpoint of what kind of person Precht was before he became Hades. Precht cared about his friends and was one of the founding members of Fairy Tail, one the reasons why many in the present get to have a place to be themselves in. We can surmise that Precht wasn’t a bad person, he just strayed down a difficult path that ultimately twisted his perception of life and magic. It may be because he wanted to save another that he became consumed by the possibilities of darkness and magic, but we won’t know until the real reason for Precht deciding to become Hades is revealed. Precht appointed Makarov as the Third Guild Master and left Fairy Tail in order to go on a journey to find “the Essence of Magic”. It was presumably sometime during that journey that Precht reformed his ways, became a Dark Mage, created Grimoire Heart and took on the title of Hades. I am not sure if we will get further focus on Precht and his descent into darkness, but I certainly wouldn’t mind learning more about his story. Maybe we can even get some focus on Precht, Warrod and Yuriy in their Sylph Labyrinth days. 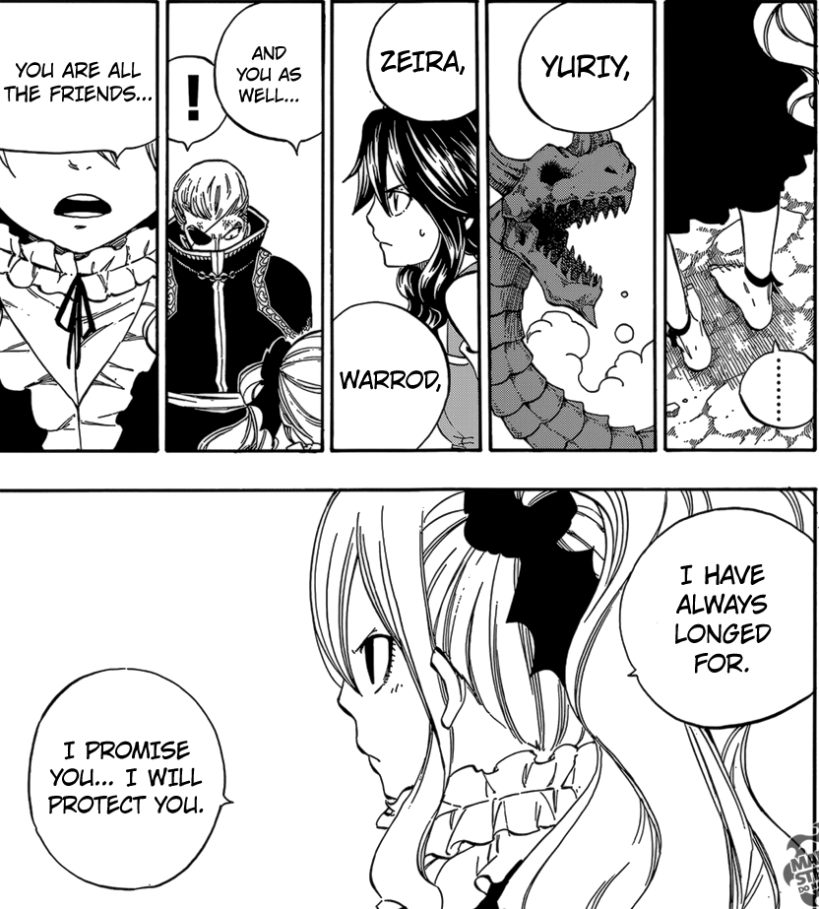 The meaning of friendship to Mavis

Yuriy Dreyar, the father of Makarov and the great grandfather of Laxus. Yuriy had quite the expressive personality. It was thanks to him that Mavis had the opportunity to leave Tenrou Island to journey across the wider world and ultimately have the reasons to establish Fairy Tail. It was a nice touch to see that Yuriy too could use lightning magic and that Laxus had something in common with his great grandfather than just the name.

The bonds of their friendship are everlasting

Zera, oh wonderful Zera. From the moment Yuriy expressed a subtle level of confusion at Zera’s “presence”, the thought of Zera being a manifestation of Mavis’s hopes and fragility did cross my mind. But with Zera developing each chapter and becoming more of a support figure to Mavis, the secret behind her existence began to fade away into the desire to want Zera to be “real”. In the back of my mind I always expected the possibility that it would be revealed that Zera was actually dead and Mavis manifested Zera’s existence in her own mind. Still, I found myself hoping that I was wrong about her fate, I genuinely really did want Zera to be more than a result of a tragedy. Despite that hope though not manifesting, I loved how her story was dealt with in the end. Mavis let Zera go and resolved to keep Zera in her heart as she moves forward in this world filled with countless adventures. Zera in turn thanked Mavis and farewelled her best friend. In my eyes, I saw Zera as more than just an illusion. Zera wasn’t just a creation from a moment of pain. I want to believe that Zera was not just a mere illusion, but an illusion that allowed Zera’s soul to help Mavis through her difficult times. The “real” Zera did spend her time with Mavis. The “real” Zera was Mavis’s best friend. The “real” Zera will always be together with Mavis. The deeply moving relationship the two of them shared did “exist”. I want to believe.

I want to believe Zera wasn’t just an illusion

Fairy Tail Zero was a surprisingly compelling read. It opened my heart, reached inside and embraced it with its endearing and inspiring nature. I loved it. Fairy Tail really does have a way of connecting the reader’s hearts with the characters in the story and because of that I always find myself smiling after the experience. Thank you for taking the time and effort in creating this beautiful series Hiro Mashima.