The blade that reflects the power of the Gods, Shinken Hakkyouken

Colour me surprised, I did not expect this battle to be the foundation of a revelation concerning Nanao, especially one that links back deeply to her very past. A past that deals with Nanao’s mother (and his older brother), a promise Shunsui made with her and why he has two zanpakutous. At the brink of hopelessness Shunsui finds through his memories and Nanao, a reason to carry on and to continue challenging the seemingly undefeatable “God”. Nanao recognised her mother’s desire, but just as her mother exercised her own will, Nanao chose to accept the curse of the Ise and embrace it wholeheartedly in order to attain the power necessary to protect that which she loves. The Shinken Hakkyouken, the blade which reflects the abilities of the Gods.

With Lille having attained near Godlike power, it apparent that there was not much room to manuveur regarding his inevitable defeat and I for one, did not expected Nanao to play such an significant role in breaking down Lille to the point that once cut, his very essence split into eight different directions. The Shinken Hakkyouken seems to have disposed of Lille but with the cliffhanger left in an ambiguous manner, I wouldn’t be surpirised if this battle last a chapter longer. 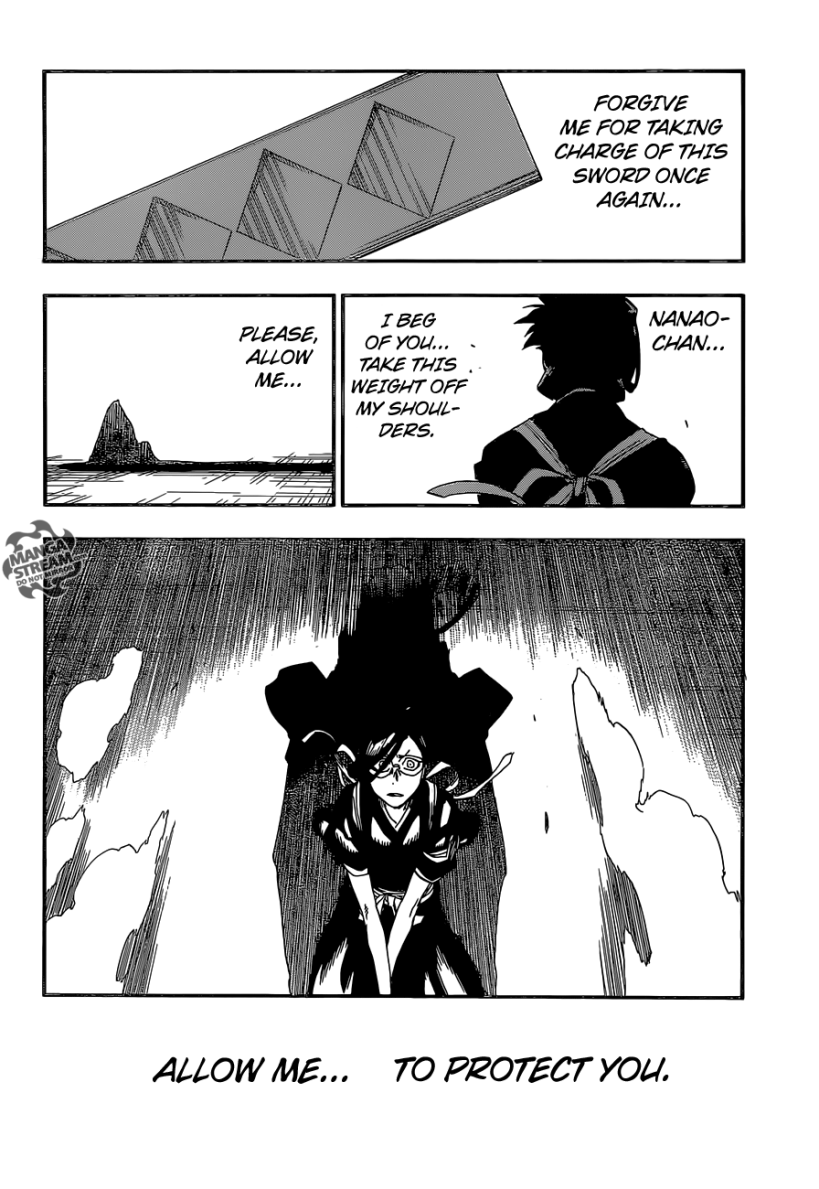 In order to ease the pain he feels…

The relationship between Shunsui and Nanao was an interesting one. I have been curious since the beginning of their stories how the two came to know each other and it turns out Shunsui is Nanao’s uncle – his older brother was Nanao’s father. Building on the demoralising feeling of being powerless, I love how Kubo-sensei utilised this battle to develop Shunsui’s feelings of responsibility of always having to look after a loved ones dear possession after they have passed away. That burden he felt eating away at his very self, part of that burden lifted when he was able to support Nanao in wielding the Shinken Hakkyouken to reflect Lille’s attacks.

In turn I equally love how Kubo-sensei decided to shift the focus to Nanao as well and reveal the internal struggles she was facing coming to terms with what it meant wielding a blade and actually have to place ones life at stake in a battle. That utter fear turned into blinding light when Shunsui revealed he was always there to support her when needed.

Is this finally the end? Or…

In the end, as expected Lille was defeated, but I personally did not anticipate Lille gaining near godlike powers and having that in turn used against him by a god-reflecting sword that ultimately seems to have been the cause for Lille being both defeated and killed. With the battle possibly over, I am curious to see what else Kubo-sensei has in store regarding future developments and the few fights that still remain. Very much looking forward to the next chapter.