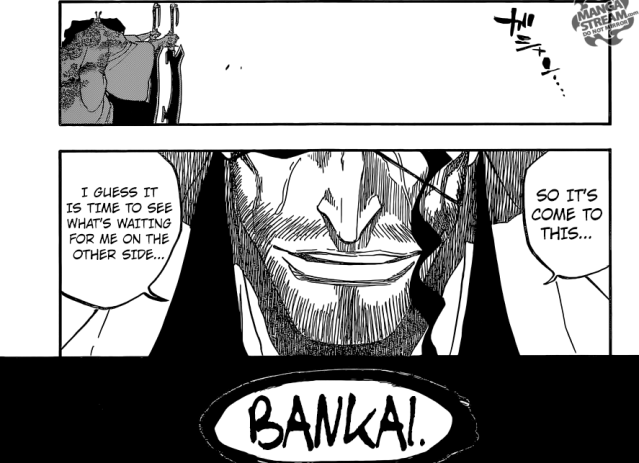 I have been waiting for this moment, this epic, soul-shattering moment that unleashes a Bankai that couldn’t be released in fear of dragging fellow allies into its enigmatic effects. For Shunsui to consider his Bankai his last resort, what exactly is the nature of it and how severe are its exact effects on those caught up in its rules? The reluctance of Shunsui wanting to unleash it and instead opting to try any tactic not his Bankai has me incredibly intrigued in what happens now with it unleashed. Lille may perceive himself some holy entity, but that smug arrogance he has deluding his sensibilities has him destined for a dramatically intense defeat.

I was curious what Shunsui was trying to do at the beginning at the chapter, but it turns out he was just acting on the options he considered he had before having to turn to his Bankai and unleash it. And in preparation for that, Shunsui had run all the way back to where the Gotei 13 had entered the Soul King realm to increase the distance between him and his closest ally.

Lille certainly does seem like a tricky opponent to fight with his weird abilities, especially his ‘3rd Time Eye’. But with Shunsui’s equally weird zanpakutou unleashing its Bankai, it is going to be interesting to see how many laws of possibility the two break with their abilities allowing them bend what is possible. Ultimately Shunsui will arise the victor, but I genuinely am looking forward to seeing how Shunsui goes about turning the tide towards him. 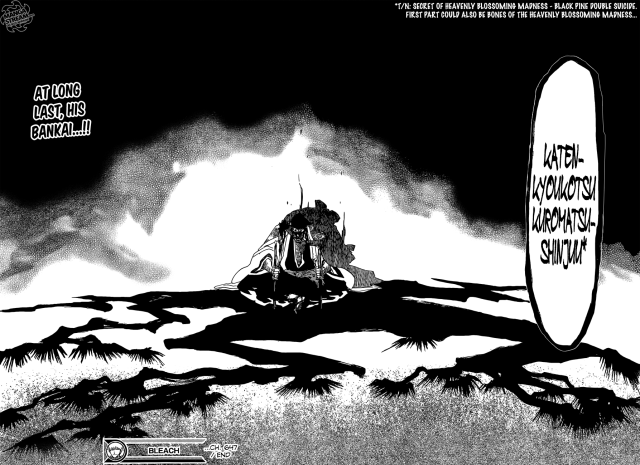 It has been unleashed! Finally!

Gerard also seems to want in on the action having missed out on it for the majority of the arc. Gerard’s “miracle” ability has piqued my interest since he had mentioned it, so I am beginning to wonder how the concept of “miracles” will work itself out as the main ability of a Sternritter. What is interesting is the characters Kubo-sensei chose to highlight Gerard with – Shinji and the Co. I won’t hold my breath but will we be finally seeing a proper match-up for Shinji this arc? Shinji was used prop up Aizen and was barely utilised this arc in terms of what he can do – both Shinigami and Hollow transformations.

Given that the remaining Sternritter are now engaged in battle, I am very much looking forward to see Shunsui’s bankai in action and who Kubo-sensei plans to highlight Gerard with. Hopefully Shinji does get some opportunity to show off his Bankai and Hollow abilities.