One Piece Chapter 801 – Targets In The New World

As we all suspected, the bounties of the Straw Hat Pirates have gone up thanks to the events in Dressrosa, although the surprising aspect is that Sanji, Nami, Brook and Chopper’s bounties have gone up as well with the defeat of Doflamingo. I was prepared for the Swirly Hat Pirates bounties not increasing with their lack of focus in the arc, but I don’t mind one bit having the whole crews bounties increased with such a significant arc that led to one of the key figures in the New World being defeated. The consequential effects that will arise from the Doflamingo’s removal from his role as an agent of darkness definitely supports the whole crew getting a significant bounty increase that justifies the level of danger now directed towards them. With all the increases, the Straw Hat Pirates current bounties now total a massive

Having revealed that Lucci is part of the CP0 was a definite shock, I honestly was not expecting Lucci to be still involved with the World Government. During their defeat something interesting must have happened, especially if it made Spandam a subordinate of Lucci now. Poor Spandam, his dreams of grandeur are disappearing more and more each day, still you got to admire how passionate a subordinate he is now. I wonder what the CP0 will do from here now that they have established that the Revolutionary Army have seized all the weapons stored in the Underground Port during the events a few days ago. The CP0 have also concluded that the Revolutionary Army have acquired the secret list of buyers who engaged in business with Doflamingo. Having the CP0 set-up as the antagonist for the Revolutionary Army makes me more curious about what the Revolutionary Army will end up doing now that Doflamingo is defeated. And yeah, it seems like Kaku is the person on the other end of the line during the conversation with Lucci.

Dressrosa embracing their tragedy and still continuing to illuminate their joy within the darkness was a great sight to see. The whole nation was affected and as a nation, they have decided to rise above their despair and move forward. The nations first step was to help their beloved King Riku back to the throne. And in order to break free from the chains of deception they were bound by for the past ten years as a result of Doflamingo’s lies, King Riku has decided to share with everyone the secret kept by the Riku Family involving the “Fairies” of the nation. By openly revealing the existence of Dwarves, King Riku intends to perpetuate a time of truth and peace for Dressrosa. 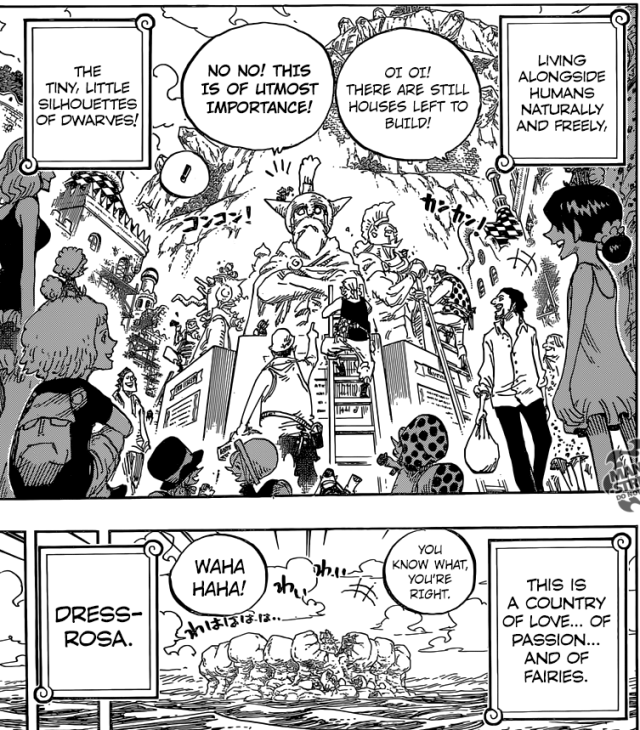 The throw back to the introduction of chapter 701 where Dressrosa was revealed to be a nation of love, passion and toys was fantastic. The damage Doflamingo has caused over the past ten years has slowly been overwritten by the current actions of Dressrosa and even though Doflamingo has been removed as the ruler, the country is still as vibrant, prosperous and loving as it appeared to be 100 chapters ago. The difference this time though is within the shadow of joy lies not the fear of a sadistic ruler, but a strong appreciation to their saviors who risked their lives to ensure Dressrosa and its people have a future. Love the iconic face of Usopp which saved a nation from the Donquixote Pirates being immortalized within his statue. Legends of bravery and majesty will definitely spread far and wide – even the World Government agrees.

What Luffy and the Straw Hat Pirates have achieved in less than a week within the New World is extraordinary. Not only were they able to form an alliance with a former Shichibukai (Law), they were able to defeat one of the most influential man within the New World, Donquixote Doflamingo, save a nation from a ten-year long tragedy, gain the admiration of one of the Marine Admirals and even have six notable pirates and a dwarf vow their loyalty and allegiance to Luffy helping to establish the 5,600 member strong Straw Hat Grand Fleet. And lets not forget the fact that they now have in their custody, a man strongly sought after by the World Government, a Yonko and a Supernova – Caesar Clown. Within a few days sailing the New World, they have established a massive target on their backs which potentially every big shot not their ally or supporter will be after.

As for Doflamingo, I love how bitter and deeply anguished he is at his defeat at the hands of a rookie (relative to him). Doflamingo held the reins to the monsters of the world, yet here he is now chained and derided by Tsuru. Doflamingo expresses himself with a smile but underneath that mask of sadism, the depth of his despair must be agonising. All that planning and executing, all those years, all that effort, everything all fell apart when he met Straw Hat Luffy. There is no way Doflamingo would not feel pissed, yet you got to admire how he can laugh it off as a bad joke.

As a consequence of his defeat though, the uncertainty attached to the state of the New World has grown even more prominent; the monster’s left free to run wild will without doubt stir up a storm that will drag the rest of the world in. Whitebeard’s demise and now Doflamingo’s defeat has opened up the desire within pirates to pursue the currently vacant throne known as the Pirate King. As Doflamingo has expressed, the world will now be embroiled in a war of hegemony between the forces seeking to rule the Sea. The Yonko, the Shichibukai, the Supernova’s of the Worst Generation, the Marines, the Revolutionary Army, the Tenryuubito, each of those forces are driven by separate desires and you can be sure that the conflicts that will inevitably arise between those parties will happen sooner rather than later. As for the subsequent effects, time will only tell.

Having been someone positioned at the center of the darkness, Doflamingo knows all too well the shadow casting itself across the world

I had a feeling that Doflamingo would never make it to Impel Down, his character if just too important to be forgotten for the rest of the series and Doflamingo or anyone else in particular wouldn’t be achieving the same feat Luffy achieved by breaking out of Impel Down. It seemed likely that Doflamingo would never make it to Impel Down due to some third party intervention and I am glad such scenario is playing out with Jack, who is connected to Kaido, targeting the Marine Ships currently transporting Doflamingo and presumably the rest of the Donquixote Pirates. Captain Jack’s ship bears the Kaido Army flag, so Jack is at the very least one of Kaido’s allies. The figurehead of the ship is that of an elephant/mammoth, so it seems possible that Jack may be a Mammoth Zoan Devil Fruit user (seeing as Funkfreed already consumed the Zo Zo no Mi). At this point, even though Jack is up against beasts like Isshou, Sengoku and Tsuru, I still believe Doflamingo will end up being rescued one way or another.

Will Jack and his crew be enough to save Doflamingo from Isshou, Sengoku and Tsuru?

We finally get confirmation as to what happened with Bellamy, he opted not to become one of Luffy’s subordinates and instead chose to take a piece of Luffy’s vivre card and journey on his own. Wherever Bellamy is gone is a mystery but he will most certainly return to the story in some manner or form in the future.

The bounty rise for each of the Straw Hat Pirates was definitely the highlight of chapter, especially seeing Zoro finally getting a bounty that matches the danger he represents, he seriously needed that. As for Usopp’s bounty, I can’t help but laugh at how fitting his bounty rise is. Way to go God Usopp, you are not only a legend but a big shot in the eyes of the world as well.

The interesting aspect regarding these bounty updates is the status update of Sanji’s bounty. Unlike the other crew members whose bounties stand regardless of them being alive or dead, Sanji’s bounty is only claimable if Sanji is captured alive. This development potentially could link to Sanji’s past and potentially his connection to a noble family as several reader’s have theorised =/. I am somewhat on the fence with this, but I am all for more Sanji backstory.

On the flipside, during the several days we have not seen Sanji, he could have done something so bad to someone connected to the higher-ups of the World Government, that they now seek him to be captured alive in order to truly make him suffer for crossing their path. Or with Sanji’s face being distorted still in his latest bounty photo – weird nose and heart eye as he chases some mermaids in Fishman Island, it could be Duval 2.0. Oh Oda, where are you headed with this…very much looking forward to the next chapter.

This entry was posted in One Piece and tagged 801, Doflamingo, Dressrosa, Eiichiro Oda, Luffy, Manga, Oda Eiichiro, One Piece, Sanji. Bookmark the permalink.