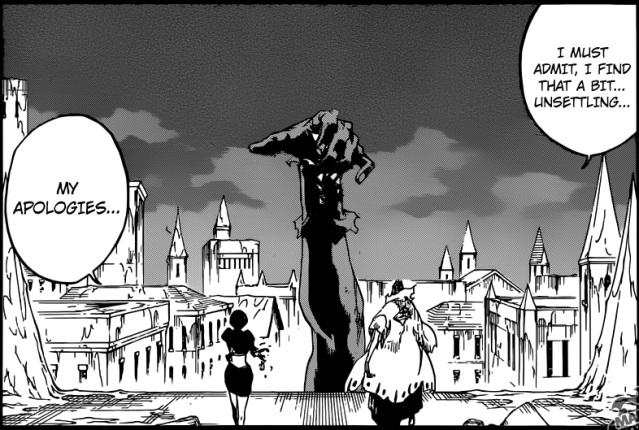 For some reason I have this unnerving feeling that either Mayuri or Nemu is going to die soon while they try to save each other. With Nemu’s life threatened, Mayuri shifts his attention to her to try to warn her, which in turn opens him up to attack by Pernida. This spurs Nemu to force herself to protect Mayuri. With the two of them caring about each other and the way the fight is currently set-up,  it feels almost likely that someone will die. Pernida has progressed/evolved to a state in which he has gained the reaction and nerve capability of someone as strong as Zaraki. At this level is seems Mayuri may need more than just himself and Nemu to combat Pernida.

Mayuri may not admit it or even fully realise it, but he really does care for Nemu and in a sense treats/thinks of her as his daughter. It is a refreshing side to his character within all that madness he has towards his research and experiments.

Even though Mayuri did make note of the Soul King’s Left Hand’s potential power, he didn’t believe due to insufficient information to use as proff. With the current chapter, I guess Mayuri has all the proof he needs to make that conclusion a certainty now. Pernida has the power to progress/evolve. With Pernida having connected its nerves to Zaraki earlier, he has gained the reactionary speed of Zaraki and thanks to Pernida having connected its nerves to Ashisogi before, he was able to literally shake off the Freezing Agent affecting his outer layer which Nemu had injected one of his idle arrows with. 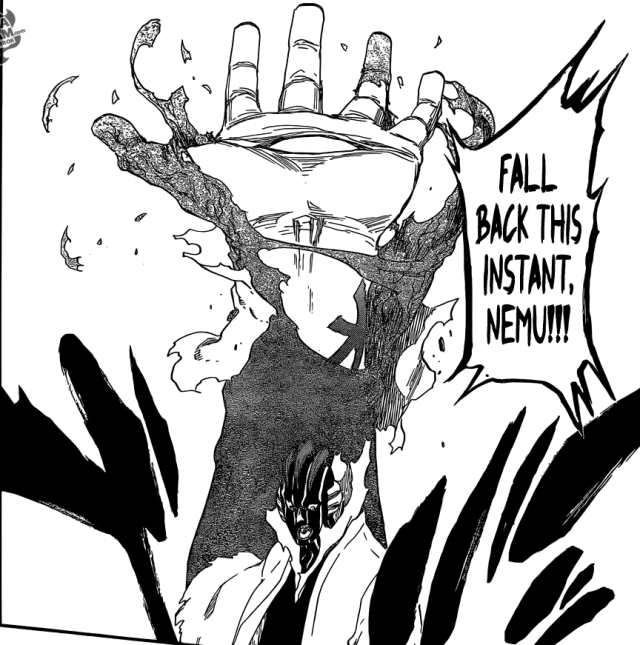 With his nerves gained the ability of Ashisogi, Pernida was able to shake off the Freezing Agent

Despite that combined effort of Mayuri and Nemu, Pernida still had a Joker up its sleeve to use against Mayuri who incorrect thought he had checkmated Pernida. With Pernida’s nerve giving him an ability to progress/evolve itself, Mayuri has pretty much now been backed into a corner. Will either Mayuri or Nemu die while trying to save the other? Or will neither die?

With Pernida having evolved its nerve all the way up to Zaraki’s level, now seems the perfect time for Zaraki to take on an opponent who is strong enough to push him and force him to really awaken and unleash that endless potential he has within him. Very much looking forward to the next chapter.