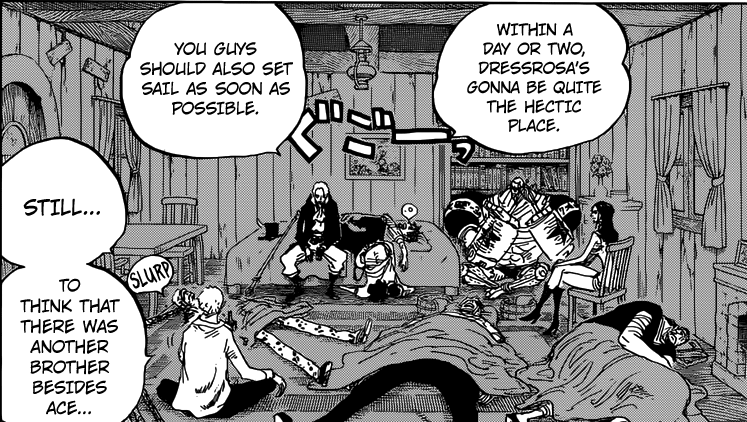 Will Sabo be meeting the rest of Luffy’s crew soon?

I had suspected that there was a genuine reason for Sabo not being at Ace’s execution trying to save him, but for him to have become amnesic after the explosion of his ship when he left the Goa King, I can’t help but see the convenience in that twist. Sure it is to be expected that an explosion and shock can cause a person to suffer memory loss, but in this case, it does feel a little too convenient that Sabo only managed to regain his memory after Ace had died. It is not a terribly illogical development, as the possibility had crossed my mind, but I was expecting something much more…surprising.

Prior to this chapter, I have been entertaining the thought that Sabo as part of the Revolutionary Army aided Shanks against Kaidou two years ago in order to help Shanks arrive at Marineford and end the War (Kaidou wanted to attack Whitebeard while he was distracted with the Marines). The battle hadn’t been shown at all by Oda and I had suspected that the reason why may have been because Sabo featured a key role in helping Shanks fight off Kaidou, forcing him to retreat. Sabo in essence by helping Shanks, who stopped the war, saved Luffy from being killed by the Marines. Unfortunately that wasn’t the case and Sabo didn’t help Shanks two years ago.

Another thought I had been entertaining as a possibility, was Sabo being captured by the Tenryuubito during the time Ace was being executed and despite Sabo’s desires to want to help Ace and Luffy, he was unable to. That thought dissipated relatively quickly once it became apparent during the arc that Sabo didn’t have much history with the Tenryuubito beyond the one who shot his ship. 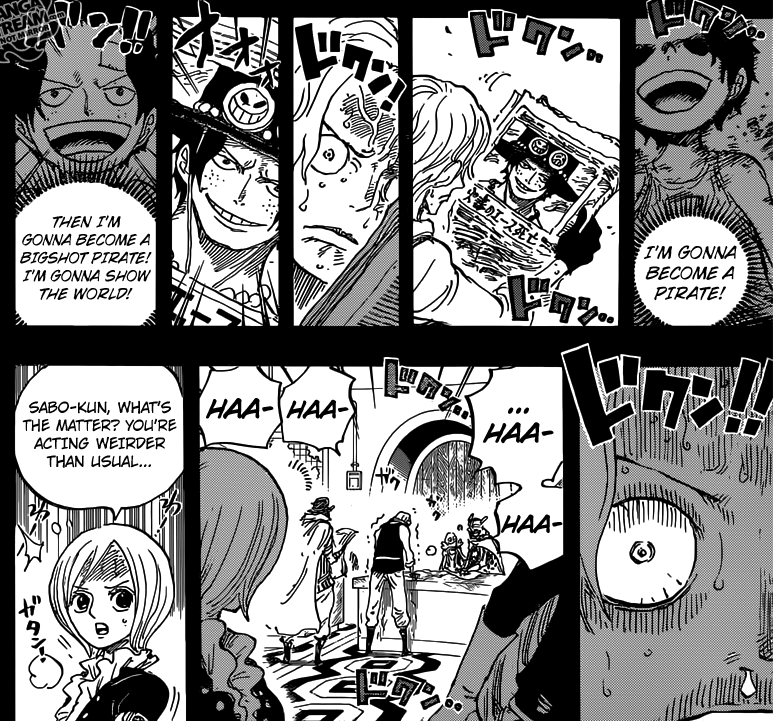 Poor Sabo, not being able to remember his brothers…

At least now we have confirmation that the reason Sabo didn’t go to help Ace was because he had no memory of the exact relationship Ace, Luffy and himself share. Sabo through the traumatic realisation of who Ace was, unlocked the door to his hidden memories. Only through that jarring reaction did Sabo find himself and the memories of his beloved brothers. The pain and agony overwhelming Sabo upon the torrent of knowledge filtering into his mind must have been shattering for him. I can see why Sabo was unconscious for three straight days once finding out who Ace and Luffy were and the ultimate fate of Ace. 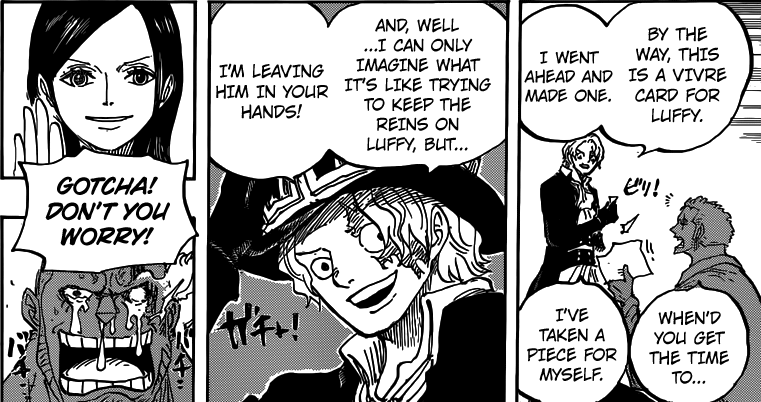 Despite the years of void, Sabo was able to attain the Mera Mera no Mi and meet his little brother. And just like Ace, he offered Luffy’s crew his condolences for leaving Luffy in their hands to look after. I am eager to find out how the Vivre Card Sabo made for Luffy using Luffy’s fingernail will be used in the future. Who will Luffy and Co. give piece of it to and when will Sabo use the vivre card piece he took to meet Luffy again? 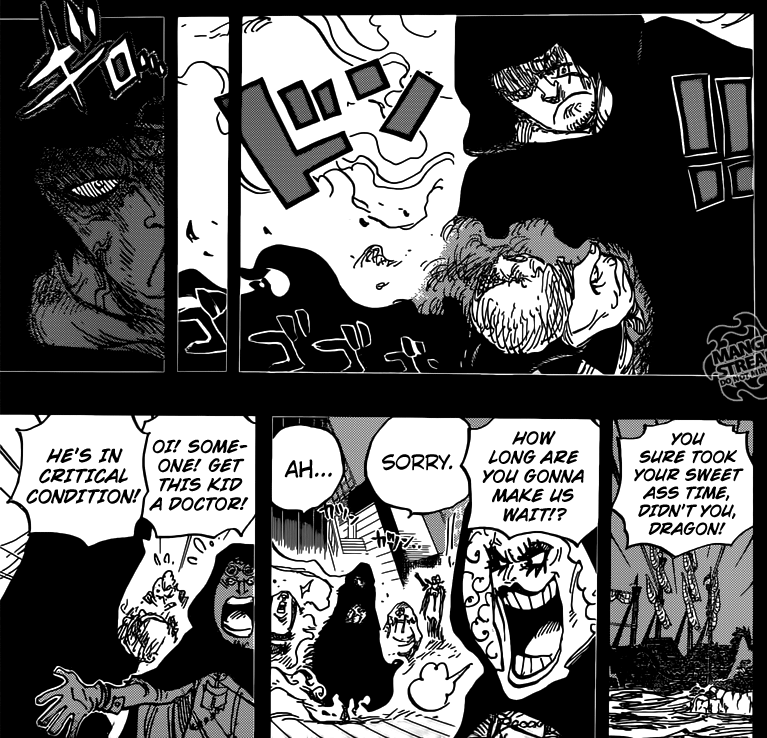 I am still certaint hat Dragon has the Storm Storm Fruit

Was nice to see the Revolutionary Army, in particular Dragon, get some screen time, even though it dealt with Dragon ten years ago. Dragon seems to be able to turn himself into some form of mist given by the mist that is emanating from his body when he saved Sabo and when he returned to his ship. I am still of the opinion that Dragon possess the Storm Fruit as he perfectly represents the embodiment of “Storm” within the manga. When people talk about “a storm is coming”, they refer to something ominous coming and in particular this holds true for the Tenryuubito who acknowledge the change a “D” can bring with them – a “storm”. Through some poetic character design, Dragon represents that character who will bring about a storm that will change the flow of the current world within the manga. Dragon having the Storm Storm Fruit would allow him to turn into a mist state (floating on the ocean surface) and this would explain a lot of the strange events surrounding him/preceding his appearance.

Should be interesting to find out the origins of those crows

The crows summoned at the end of the chapter to carry off Sabo to the rest of the Revolutionaries is interesting, I wonder who exactly is the creator/controller of those crows. Does that person possess a Devil Fruit and what fruit is it? A Zoan, Paramecia or perhaps a Logia? At the very least we can presume that that person is associated with if not directly connected with the Revolutionary Army.

The chapter cover page was interesting, I wonder if Oda is subtlety hinting to the fact that he really does intend to cover the Wizard of Oz setting within his story – the Emerald City with Dorothy, the Strawman, the Tinman and the Lion. Very much looking forward to the next chapter.