The reason behind Isshou’s restraint in stopping Doflamingo is revealed

It is starting to make complete sense now, the reason for Isshou’s restraint in dealing with Doflamingo directly despite the Dressrosa citizens being in danger and the belief Isshou placed within the Straw Hat Pirates to see his gamble fulfilled. In order to perpetuate a change, Isshou needed the world to see in its uncensored truth just how corrupt and dangerous the sanctioned Shichibukai system is and the inability of the Marines to actually do anything to prevent the Shichibukai from exploiting their power to subjugate nations and from continuing to exploit it. By bringing to light the destruction and chaos caused by Doflamingo, Isshou is opening the eyes of everyone to the disadvantages of the Shichibukai and has in essence begun the ultimate end of such a power.

Isshou may have put many lives at risk by following through with his gamble and leaving Doflamingo for pirates to deal with, but in order to prevent another Dressrosa or Alabasta from arising in the future, he needed to follow through with such a risk and make sure that the tragedy on Dressrosa is utilised to inform everyone around  the world of the dangers the Shichibukai pose which in turn can ultimately save other nations from suffering the same fate in the future. The motivation behind Isshou’s actions was protecting the world from pirates, especially dangerous ones sanctioned by the World Government.

Isshou knew that because he is part of system that enabled pirates to commit such atrocities – causing Dressrosa to suffer so terribly during the past ten years, he couldn’t represent the “justice” the words printed on the back of his coat embodied. By leaving Doflamingo to the Straw Hat Pirates and allies, Isshou is making a statement to both the world and the Marines that the Marines hollow attempts to substantiate their claims of “justice” is but a notion riddled with holes and deception. In order to have the world see that the Marines are ready to accept the mistakes they have made and actually reach towards upholding the “justice” they so proudly speak of, Isshou has made his gamble.

By the world realising that Dressrosa was saved not by the Marines, the embodiment of “justice”, but by pirates, warriors and its citizens, the people around the world will question the value they hold within the eyes of the current Marines and World Government. In order to bring about change within both the world and the Marines, Isshou needed to reveal the “truth” to everyone. Only when people are liberated from their “disillusion” (created by the lies of the Marines and World Government) can they begin to question the reality of the danger they are vulnerable to.

Doflamingo’s defeat served not only to affect the pirates around the New World, but the entire Marines. And beyond the information contained within the chapter, the significance of the chapter attaches itself to deepening the value the entire Dressrosa Arc represents for the New World and the changes about to be generated. The Straw Hat Pirates and Law have caught the attention of numerous New World Pirates and nations and have in essence created a name for themselves within the New World. The consequential effects this will have within the future leaves me feeling nothing short of excited.

The Gorosei and Sakazuki finding out about Doflamingo’s defeat at the hands of the Straw Hat and Law Alliance was so so satisfying. To think the world beneath them is crumbling a mountain at a time with Straw Hat Luffy still sailing the seas, what a sweet notion to realise that their “supreme rule” is anything but going as planned. Change is about to come Gorosei. Brace yourselves!

Looks like Tsuru and most likely Sengoku and heading towards Dressrosa

Tsuru is on her way towards Dressrosa to apprehend the Donquixote Pirates, which she has been pursuing since at least thirteen years ago and it appears that Sengoku is with her on her ship. Sengoku is currently a Marine Inspector, which would explain why Tsuru referred to the mysterious person as “Inspector”, plus the “okaki” hint which Oda dropped very likely implies that it is Sengoku on the ship with her – Sengoku’s codename when conversing with Rosinante over the Den Den Mushi in the past was “Okaki”. The mysterious person does sound like Garp, but it would make more sense if it were Sengoku on his way to Dressrosa with Tsuru. Dressrosa was the nation which both Rosinante and Sengoku tried to stop from falling under Doflamingo’s control. Rosinante was unable to relay his information to Sengoku and as such, Sengoku was unable to at the time to save Dressrosa. With Sengoku arriving on Dressrosa to apprehend Doflamingo, I do also wonder if Law and him would end up meeting and have their connection to Rosinante come to light. Both of them share close connections with Rosinante – Sengoku saved Rosinante and Law was saved by Rosinante.

Focus shifting towards the other Eleven Supernovas reactions to the news of Luffy and Law (and Zoro) crushing Doflamingo (and the Donquixote Pirates) was fantastic and completely set the tone for the future events of One Piece about to be delved into. Bonney is still on the run and seems to be guided by some mysterious purpose which Oda is intentionally keeping us in the dark on. Urouge is recovering on a solitary cloud Island when a mysterious person arrives before him – I wonder who s/he is? Some have speculated Enel, but I wonder… 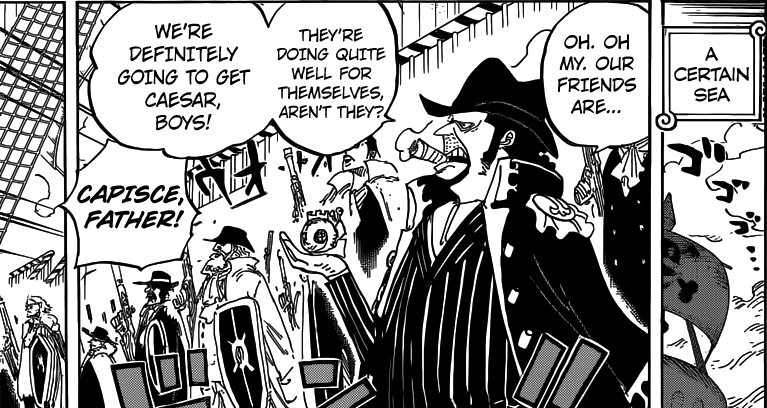 What exactly is Capone up to?

Capone seems to be within the vicinity of Big Mom’s ship if not on one of her ships. Potentially Capone could be allied with Big Mom, especially with Law having stated in chapter 667 that to survive in the New World, one either has swear allegiance to one or directly oppose them. Within the Eleven Supernovas which will ultimately shape the next generation, there will definitely be those that directly oppose the Yonko and those that join one. Capone (and Drake) seem to be the latter. Capone’s dialog does seem odd though, so they may be more to his actions and position than we are currently aware. Capone targeting Caesar is interesting though. I am still curious to learn what happened to Capone two years ago when he entered the New World and got sucked up by that mysterious massive object in the sky. 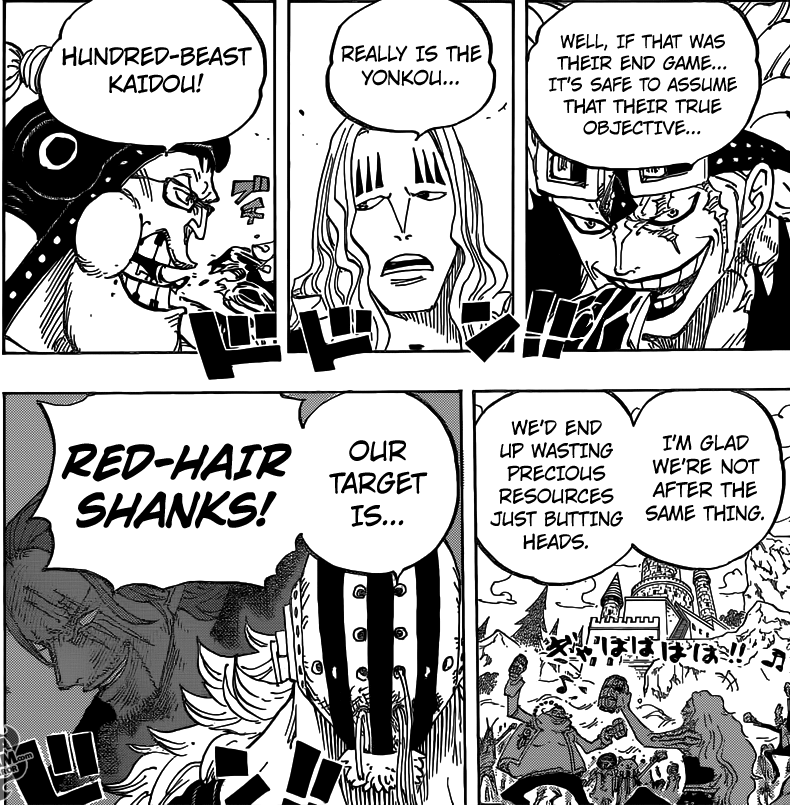 Shanks is their target huh? How exciting…

Kid, Hawkins, Apoo and Killer targeting Red-Hair Shanks was a surprise and one which leaves me quite intrigued. I doubt alone their alliance will stand up to Shanks and his crew as it is very likely that with Whitebeard gone, Shanks is one of the most powerful people in the world – that Haki! But if you include Blackbeard exploiting the chaos the Kid-Hawkins-Apoo Alliance will create for Shanks, I can see Shanks eventually being pushed back and affected negatively. Can’t put it past Blackbeard exploiting the hard work of others.

As we have known, Drake is part of Kaidou’s crew and has finally confirmed that Dies Barrel from Law’s flashback was in fact his father and that Doflamingo had indeed killed him. What is interesting about Drake is the fact that he isn’t a person solely concerned about surviving the New World, so him joining Kaidou is a very intriguing move by him. I really do look forward to finding out the reason behind his decision. As for Kaidou, we have gotten some form of silhouette or shadow for him which implies a massive form, but due to the comment made by one of his subordinates of “Kaidou-sama! Where are you?!” I can’t help but ponder on the direction Oda is focusing our attention towards – could Kaidou in fact be very small?

Is that shadowed figure really Kaidou?

What a brilliant moment to see Sakazuki challenged

Overall, what a fantastic chapter this was with content dramatically linking the whole Dressrosa Arc into the changes about to rock the whole world. Luffy and Law have created a storm that has them completely in the center of it, both as a target for other New World powers and as an inspiration for other Supernovas. Isshou has been forced into a corner by Sakazuki and it will be interesting to see how he reacts, but regardless of whether he chooses to capture Luffy and Law, those two will inevitably escape. I could see the dwarves creating an underground route for the Straw Hat Pirates and allies to escape. Whatever happens, I am very much looking forward to seeing what happens in the next chapter.