The Stagiaire Arc was actually more enjoyable than I had expected, it highlighted the difficulty of running a restaurant business and the flexibility required in not only ones cooking, but thinking as well. Through the struggles Souma had to face and learn from, he developed as a chef and advanced his skills and knowledge regarding the different styles and techniques of cooking. Just as was intended with by the Stagiaire Period, Souma managed to “steal” the different techniques he was exposed to by the “professionals” and incorporate them into his own cooking. In addition to opening the students eyes to the world of cooking, the Stagiaire Period also managed to open the students eyes to what they themselves are capable of. 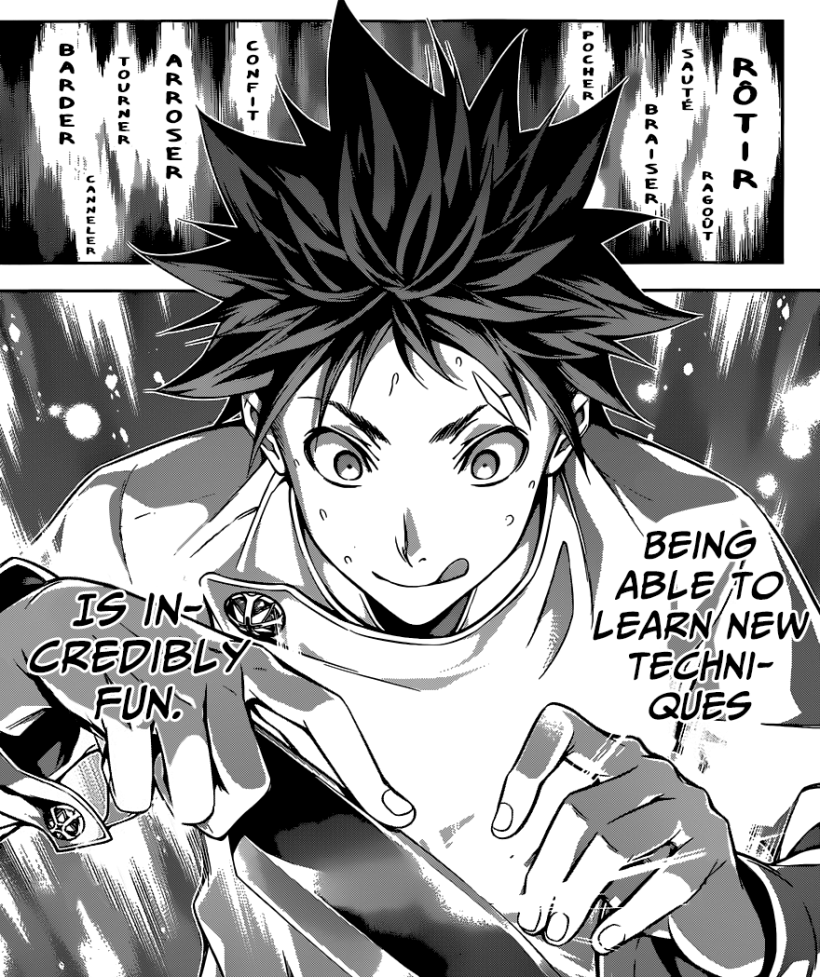 It would have been cool to see more of what the other students had to go through during the Stagiaire Arc but I will settle for the chapter we got on Erina and Megumi, especially since it seems likely that once the others characters are highlighted in cooking battles again, we will find out exactly what they learned during their time in the different restaurants they were hosted by. After only just one month, the first years students have improves drastically and I look forward to finding out exactly how much they have grown.

Advancing himself through battle

The Elite Ten were an interesting bunch, but what was most interesting was the fact that the Elite Ten have such power over how they can use the resources of Tootsuki Academy. Because Tootsuki is a place which nurtures the strong/talented, those at the top are able to substantiate their learning with even greater experiences and resources. Those seeking to reach the top in turn have to truly fight the strongest cooks in the Academy. With the Eight Seat of the Elite Ten now in focus as an antagonist, one has to wonder exactly what Kuga’s fate will be at the end of the arc. Will Souma end up defeating Kuga if he manages to gain the right to challenge him to a Shokugeki?

Souma is actually incredibly smart about using the popularity of Kuga to make himself more noticeable to the festival attendees. Those seeking to locate Kuga’s booth during the festival using the guide will also notice Souma as their info pages are right next to each other. And even if the festival attendee’s don’t use the guide, the very fact that Souma’s booth is located in front of Kuga’s allows for Souma to be noticed regardless. Once people are aware of his booth, he can begin seducing them over to buy his food with its deliciousness – through the dishes aroma or presentation. I doubt Souma will end up running his booth alone, so it will be interesting to find out who will end up helping him. Will it be Megumi or is she part of the Polar Star Dorm booth team?

Given that one of the Chinese dishes which Kuga has on his menu is spicy, I wonder if Akira will end up aiding Souma in order to get the Elite Ten to re-evaluate their opinions and perception of the those “beneath” them. With Souma having to prepare hundreds of dishes during a day, it seem unlikely that he will be running the booth himself. Having a few skilled people to help him would definitely be of benefit to Souma and actually make Souma earning more money than Kuga a very possibly prospect to believe.

Personally, it seems a bit premature to have Souma become an Elite Ten member, but with Kuga’s personality being so jading that one supports his defeat, I really do wonder what Yuuto has planned for the story. In all likelihood, Souma will earn more profits than Kuga but end up losing in his Shokugeki (or drawing). Ultimately, by the end of this arc, Souma would have improved his popularity immensely, especially with the Elite Ten members. The possibility of Souma getting expelled is zero, unless of course Yuuto seeks to center the next arc around Souma working his way back into Tootsuki Academy.

Very interested in seeing how the current top first-years seek to gain the attention of the current Elite Ten members and challenge them. Souma himself is doing things in his usual dramatic ways that get one pumped up for what is to come. Looking forward to the next chapter.