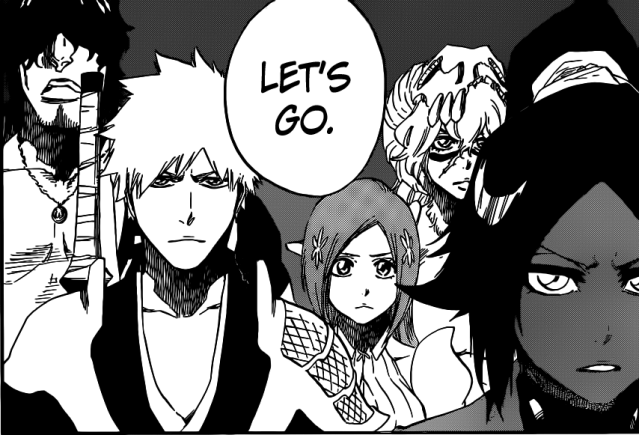 Hope to finally see the main characters actually feature in a battle!

Looks like Juhabach really does plan to create a world of his shaping once he has done destroying it. I was curious to see what exactly Juhabach’s end goal was and it turns out it was more than just killing the Soul King. Juhabach didn’t just want to destroy the Gotei 13 for what they had done to Quincy a thousand years ago, but he is seeking to completely consume the very world they have created. Juhabach seeks to attain his revenge by replacing the world of the Shinigami by a world of his creation. The Gotei 13 currently represent the “Gods” of the world, but Juhabach plans on creating a world in which the Quincy represent the “Gods”.

The Town of the Wandenreich crumbling over Seireitei is interesting and suspiciously ominous. Does Juhabach not need the Wandenreich that appeared in Seireitei because he is about to destroy Seireitei altogether? It would make the most sense if this was the case as with Juhabach and the Quincy now residing within the Soul King’s realm, they have no need for Seireitei and as such would have no problem seeing it destroyed.

Juhabach sure does have a thing for the cold and stark…

What else does interest me is the door Kisuke has helped to create, why has Kubo-sensei placed such emphasis on the opening of the door and prolonged its creation for so long? Are the Quincy and Juhabach going to appear on the other side of the door? Has Juhabach predicted this future with his All Mighty power and eyes and does he intend to use the opening Kisuke has created to enter Seireitei and personally destroy it?

The current Soul King’s realm being devoid of the Sternritter, especially in the vicinity of the Soul King’s Palace leaves me incredibly suspicious as to whether Juhabach and his Elite Force have headed elsewhere. It is entirely possible that the Sternritter are inside the recreated Royal Palace and Kubo-sensei has just avoided focusing on them in order to leave their dramatic appearances for the next chapter.

It has a certain otherworldly charm to it…

Personally, I can’t wait to see the upcoming battles as I am incredibly excited to see Sado, Inoue, Yoruichi, Ganju, Grimmjow and Nel in battle again. It has been so long since they had a battle to feature in.

The question of who will be the next Soul King once Juhabach is destroyed is still hanging in the air, will Ichigo become it or does Kubo-sensei plan to have Aizen become the next Soul King? Because from what we know about the balance of the worlds, a Soul King is needed to prevent the worlds from collapsing onto and into each other. Whatever the case, I am very much looking forward to the next chapter.