The downsides of Gear Fourth really are severe

What a surprise, so Doflamingo’s defeat has been extended to take place beyond this chapter. I was certain Oda was building up the previous chapter to set-up Doflamingo’s defeat in this chapter, but apparently Oda seeks to highlight the double-edged nature of Gear Fourth before he concludes the battle with Doflamingo. The benefit of focusing on the side-effects of using Gear Fourth is it helps to highlight the charm Luffy has and his ability to attract characters over to his side, which in this case happened to be Gatz and the Gladiator fighters who have been targeting him for the bounty Doflamingo placed on his head.

I had expected Doflamingo to get up after the Lion Bazooka attack, but I did not expect the consequences of using Gear Fourth to be so severe for Luffy that he was left in state of defenselessness unable to use Haki let alone move. Gear Fourth really does have a massive downside to using it that I have begun to wonder how exactly Luffy using Gear Fourth against a Yonko wouldn’t end badly.

I have to admit Gear Fourth’s design is growing on me and the inflated look of Luffy leading to his bounciness is amusing. Got to love the Hulk-nature of the design though, it helps to balance out the look of the Gear and give it an air of seriousness.

How interesting, Burgess is targeting the Gomu Gomu no Mi?

Gatz appearing at this exact moment to help Luffy when Gear Fourth wore off was surprising but quite awesome, I guess he was just in the right place at the right time. Thanks to Gatz Luffy has a chance of getting ten minutes to rejuvenate his Haki and gain enough strength to launch the final attack onto Doflamingo. 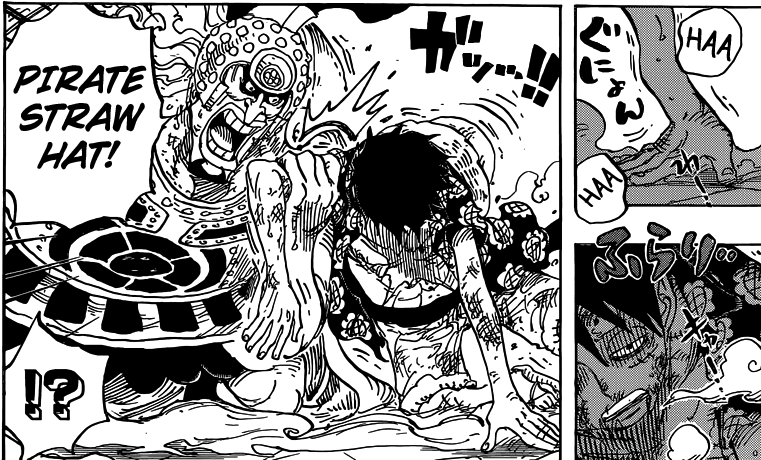 What the Dressrosa Arc is showing is Luffy’s ability to captivate others even those who dislike him with his charm and boldness. Just by being around Luffy people are drawn into wanting to help him. Mihawk was right in stating that the power Luffy possessed was the most dangerous power in the world, just as Doflamingo and Burgess are finding out and how Blackbeard and the World Government will inevitably find out. Not only will Luffy bring about a storm, he will usher in a wave that will affect the whole world.

It is understandable that Luffy will require the aid of others to take down powerful foes but I really do hope that when Luffy begins to take on a Yonko, he won’t be as heavily reliant on his allies as he was against Doflamingo. It will be more fitting and meaningful if Luffy engages the Yonko in a battle that doesn’t involve others slowly weakening a Yonko (like Law against Doflamingo) or distracting a Yonko to buy Luffy time (like the Gladiator’s against Doflamingo).