[Theory] One Piece – There’s Something About Monet (Nakama Theory) 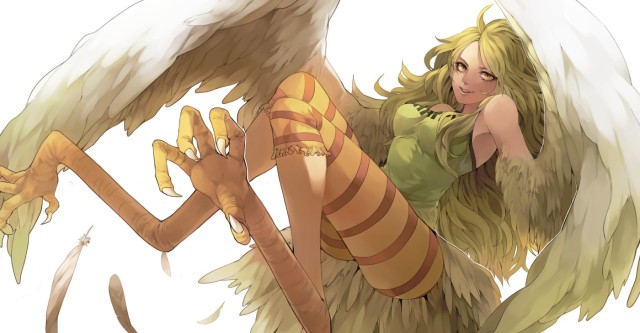 Monet the Harpy – art by teebohne

I really can’t help myself in pushing forward this theory as I have quite the obsession with Monet’s character. Although I will make an effort to be as objective as I possibly can, there will be a certain degree of bias driving me during my interpretation of the scenes which I will be using to support my theory surrounding Monet regarding her potential as a Straw Hat nakama candidate due to my obsession. Be it my delusion, hope, insanity, ego or something even more intangible, there is some incomprehensibly mysterious force compelling me to follow through with this desire.

I was one of the first, if not the first, to correctly predict that Monet was a Logia Devil Fruit user – the Yuki-Onna, so I have a certain attachment to her character and cannot not believe in my feeling that Monet has a deeper relevance in the story than what we were shown.

Now before Monet’s character can be considered a potential candidate for a Straw Hat nakama, there are certain arguments that need to be addressed:

Those are basically the three main elements preventing Monet’s character from being considered anything beyond a villain. Once I tackle those elements, I will express why I believe Monet has potential to become a Straw Hat member.

Evidence against Monet being dead

Is Monet evil and irredeemable?

How will Monet become relevant to the story?

What will Monet’s role in the story be?

The Potential Of Monet

It may be meaningless, but I find it interesting and note-worthy that there is an astronomical telescope in the Thousand Sunny’s Crows Nest:

For what purpose does the astronomical telescope serve at moment in the Straw Hat crew? I doubt it would be used for scouting when there are binoculars available. It may be used for star-gazing by the members merely because some have interest in space, but if space does become relevant to the Straw Hats adventure in the future and they gain a nakama who is an astronomer (Monet), I can certainly see that astronomical telescope being put to serious use.

Another note-worthy point is the mystery surrounding the sea/snow rabbits that appeared in the sea around the Thousand Sunny in chapter 700 when the Thousand Sunny was traveling towards Dressrosa. Those sea/snow rabbits bear a ridiculously uncanny resemblance to the snow rabbits which Monet creates with her Yuki Yuki no Mi. Is it coincidence or intentional by Oda? The anime did make them out to be Sea Lapahns, but seeing as they weren’t in the manga and were an original addition to the One Piece world creatures by the anime, I won’t take that anime filler arc seriously.

I cannot think the two to be unrelated…

The fact that Oda in the volume 71 SBS makes note of that scene from chapter 700 but avoids explaining what exactly they were/are has me believing that Oda was teasing us with that comment and was intentional in making the sea/snow rabbits resemble Monet’s Snow Rabbit attack.

D: Regarding Chapter 700… Oops…! Good evening, Odacchi! Regarding Chapter 700, while Luffy and the others are on the way to Dressrosaroba, we can see animals that look like sea rabbits. What does Law like to eat other than Onigiri? P.N. Hasumomo
O: Well, ummm, grilled fish! Alright, next question.

It could be nothing, but the way Oda completely avoided addressing the scene about the sea/snow rabbits in the ocean yet chose that particular question to include in the SBS of the volume has me wondering whether Oda wanted to hint towards something or not =/.

Anyway, I can see much appeal to Monet’s character; such as her playful personality, her really unique design, her amusing characteristics, an interesting fighting style (utilising unique weapons) and an overall mystery surrounding her character. To me, Monet has to be one of the most uniquely designed female characters in One Piece, especially seeing that her Harpy form likely didn’t come about through natural means (meaning Monet may be the only harpy in the series). Her epithet being a Yuki-Onna is also incredibly fitting and cool for her Logia ability, which has been highlighted quite comprehensively in the short time she was focused on. You can tell Oda put a lot of thought into her character, especially with her abilities and differentiating them from the Hie Hie no Mi abilities.

Monet already shares the unique design and quirky personality qualities the other Straw Hats share, so there are some factors that support her being a potential Straw Hat nakama. Plus Luffy absolutely loves snow. The fact that Monet’s dream is connected with the Pirate King and because Oda was desperate to make it appear Monet had died makes all the more certain that she is a very likely candidate for becoming a Straw Hat nakama.

Ultimately though, the key questions become:

This theory is based on a lot of speculation, but I just can’t help but feel that there really is something about Monet.

Thank you for reading!