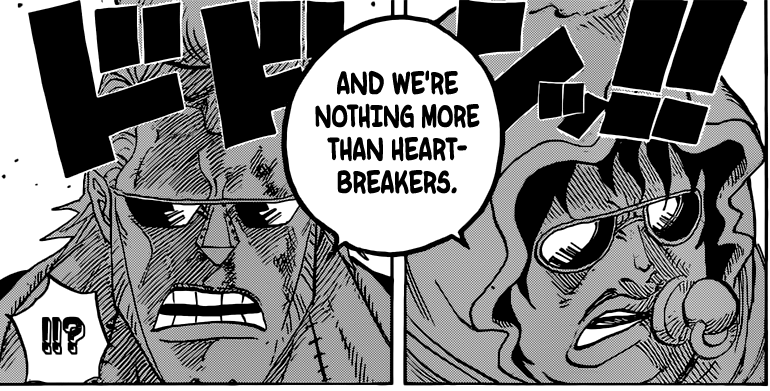 In another time these two could have been friends

My goodness, I can’t even think clearly because the overwhelming dose of manliness from Franky and Senor Pink has sent my senses into a climax of both awe and horror. Did what just happen actually happen? It’s chilling trying to rationalise what just took place but the amusing nature of the events beckons one to continue wondering. Ultimately though, through countless events of zaniness, a battle between “man” has erupted.

Franky and Senor Pink are clearly beast of uniqueness in their own right, and with their encounter reaching a climax, I am curious to see whom of the two will reign victorious over the other. It will be sad when the conclusion of their battle arrives, as Franky and Senor Pink bring out an extreme side in the other, but seeing how the level of manliness has reached dangerously toxic levels, it will be a welcomed change to see it toned down. And hopefully a display of their hardboiledness is kept brief to avoid overexposure of Franky and Senor Pink’s charm.

It took a long while for Princess Mansherry to visually appear in the manga and it looks like from her crying that she isn’t as bad as she was initially made to appear by Leo. On top of that, Leo is the one she is hoping will come save her, which does lead one to believe that there is something going on between the two or at least a way Mansherry feels about Leo.

I wonder what Mansherry’s “power” is =/

The fact that Doflamingo is keeping her alive is interesting, couple this with the fact that King Riku requires Mansherry’s “power” suggest that she has an important role to play within this arc. It is still questionable whether this “power” of Mansherry’s is related to her status of royalty or whether it refers to something more obvious, say a Devil Fruit power. Whatever the case, King Riku appears adamant in securing Princess Mansherry.

With the players of Dressrosa revealed now, I look forward to seeing what Oda-sensei has planned for the rest of the arc and its characters. Looking forward to the next chapter.