Fairy Tail Chapter 392 – Something To Live For 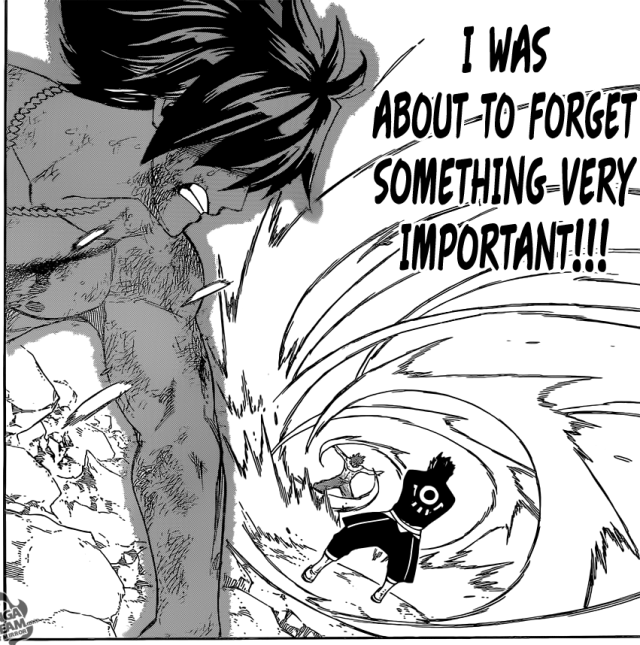 Overcoming despair and realising what to live for

I thought that it was incredibly weird for Deliora to visit the grave of someone during his introduction, I ended up rationalising that as Silver having control over his body at that time, but the actuality of circumstances has revealed that Deliora was never revived and the control Silver had over his body was never relinquished. Was Tartarus fooled as well believing that Deliora was resurrected or did Mard Geer find some way to force Silver and his Devil Slaying abilities to work for his cause? Whatever the case I am incredibly interested to see the reason Silver has for deceiving his son and forcing Gray to realise just how much he doesn’t want to throw his life away.

I am still trying to fit the pieces together but when you look at Silver’s actions throughout the arc, you do notice that he was definitely the neutral type and someone quite contrasting to Deliora who would have acted on anger and revenge the moment he seen Natsu and/or Gray. Still what reason could Silver have to put on such a convincing act to make the son he has never seen for so many years believe that he was the very demon whom had stolen so much away from Gray? The only reason I can think of at the moment is to help his son get over the demon whom has been haunting his nightmares. Gray never got over Deliora and the terror it embodied, he still feared it and was terrified by its power which took the life of both his parents and his master. The emotions associated with Deliora left Gray lost and blind to that which Gray currently has.

Memories of his nakama

By confronting Gray with the “existence” of Deliora, Silver has forced Gray to face his fears and take a good hard look at what it really means to die and sacrifice yourself. Gray, tormented by the “illusion” of Deliora fell into the perception that he must win at any cost, even if it meant his life, which thus led him to utilising “Iced Shell”, the very same technique Ur used to save him and seal his darkness.

Once the terror of Deliora cast Gray back into his “darkness”, it was the memories of his nakama and the sacrifices they had made for him (Ultear) which managed to pierce through the darkness and clear away the despair and terror that Deliora represented to Gray. Through that moment of clarity, Gray was able to counter and come to a realisation of who Silver actually is, his real father. With the truth of the situation revealed, will the truth of the circumstances be revealed now as well? I am eagerly looking forward to learning about the exact reasons Silver had to put on such an act. I am also curious to find out if at some point Gray will be able to utilise Devil Slaying magic =/.

Gray and Silver, the son and the father…

Regarding Wendy, I love how she is going to request aid from the other guild around Fiore in order to avert this crisis currently consuming Fiore. With the combined efforts of all of Fiore’s guild’s, Face may very well be stopped or at the very least have the effects of its Magic Pulse Bomb explosions reduced (by reducing the number of detonating Face’s).