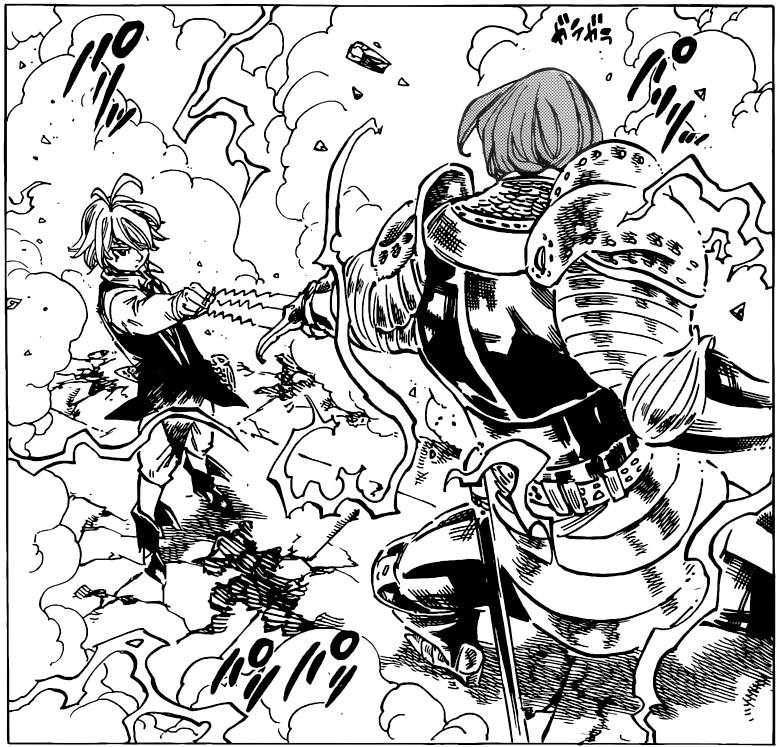 That was a bit surprising, for Melodias to be someone targeted by the “Goddess Clan” whom see him as a threat to the harmony of the four clans, it seems suspiciously shady on so many different levels. Firstly, the voice Ban and Hawk are hearing, does it really belong to a member of the Goddess Clan? Hell knowing the Holy Knights, I wouldn’t be surprised if they set Ban up and are pulling his strings to force him in conflict against his captain, Melodias. Still, I guess since Melodias does have demon power, the clans whom once stood against and defeated the Demon Clan are worried about the threat the Demon Clan poses. But wanting to slay Melodias seems incredibly odd, they should be more concerned with Hendricksen, unless of course the demon power inside Melodias isn’t something that Melodias’s human self can control completely and the danger of it overwhelming Melodias is the driving force behind the Goddess Clans request.

I have my doubts as to whether a member of the Goddess Clan is currently conversing with Ban, but for the moment, since there are some elements in favour of the voice belonging to a member of the Goddess Clan, I will go along with that. Interesting to hear that the Goddess Clan lost all their power during the Ancient War, it makes one immensely curious about the contents and developments of the war when four clans (Goddesses, Fairies, Giants and Humans) had to stand together to take down one clan, the Demon Clan. The threat the demons pose does make it more believable that the clans are fearful of Melodias’s demon power and have reason for wanting Melodias dead. Still, why exactly are they afraid of Melodias, does his demon power relate to something or someone important? Prince of the Demon Clan possibly?

Regardless of the clans reasons for wanting Melodias dead, Ban is now in tough situation. If he wants to bring his beloved Elaine back to life, he will have to betray and kill his friend and if he wants to remain loyal to Melodias, he will have to forsake Elaine’s revival. Personally, the latter is better option as Elaine wouldn’t want Ban to betray his friend in order to bring her back to life.

It is a tense development, will this request by the Goddess Clan see the relationship Ban and Melodias have fracture and break apart? Or will Ban find another way to get the Goddess Clan to revive Elaine? Either way, Melodias’s demon power does make things complex, where exactly does it arise from and how much of danger does it pose to Melodias’s self and the safety of the whole world. Some backstory coverage would certainly help in clarifying some of the question surrounding Melodias =P.

Gilthunder, I have grown tired of seeing him present himself as fully aware of what is going on when in fact he knows nothing of what happened. Gilthunder’s reluctance to question the suspicious circumstances surrounding the Holy Knights makes you want to slap him, can this man open his eyes and start to at least doubt his higher-ups whom have appeared incredibly shady this arc. I hope Melodias puts him in his place and makes him realise how blind and foolish he is.

Yay, another smart Holy Knight who realise how corrupt the rest of the Holy Knights are

That teleporting Holy Knight, who exactly…is she really Gilthunder’s mother? But what did she mean when she stated that she once loved the Seven Deadly Sins? Ah, I really want to know what lies under that mask. With Threader at the palace though, there may be a chance that we will find out who that teleporting Holy Knight exactly is. Also what happened with Magaret, what will she do now in response to Elizabeth being captured? Looking forward to the next chapter.