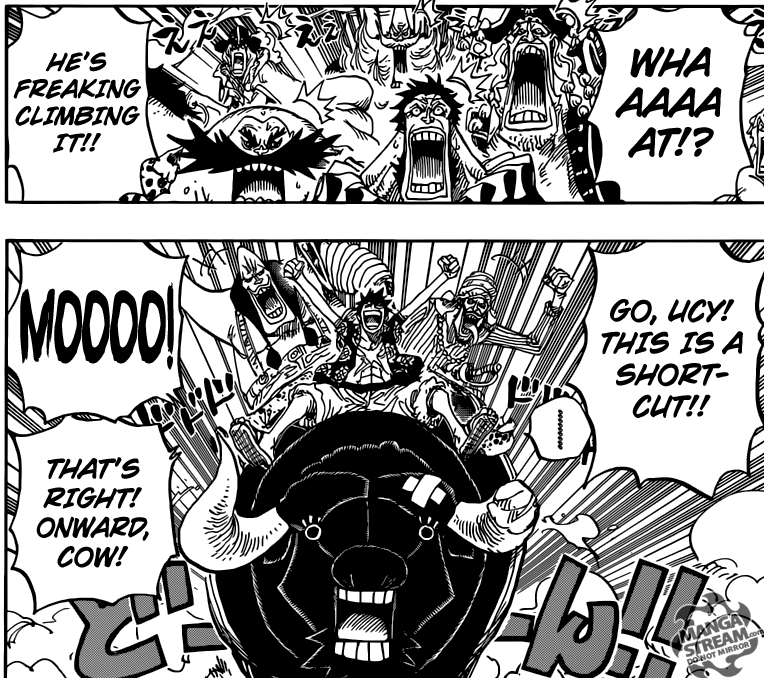 What a crazy and dysfunctional group of allies =P

The Donquixote Pirates just got a taste of “God” Usopp’s divine retribution, thanks to heavenly light “God” Usopp has basked upon the weary souls imprisoned by Doflamingo, they now fight to repay the “Heavenly” miracle they were saved by. Each of them now on route to the palace Doflamingo is present in. Additionally, Law has finally decided to open up to Luffy regarding his past and his reason for standing against Doflamingo. Doflamingo had a younger brother, Corazon, he saved Law at some point in the past and was later murdered by Doflamingo for reason yet to be revealed. Has Law decided to take vengeance upon Doflamingo with his own hands?

Each of the Colosseum fighters boast an incredibly level of power, and given their desire to take down Doflamingo, it will most likely end up with them taking on Doflamingo’s main crew members as Luffy (and Law) deal with Doflamingo. They may even have a hand in helping destroy the SMILE production factory and keeping the Marines at bay will Luffy battles Doflamingo.

You tell, Zoro is excited to cross blades with another swordsman

Pica Devil Fruit ability is significantly more useful than I had initially given it credit for but with Luffy helping to uncover his real body and Zoro now matched against him in a battle involving swords, it just may be time that Pica is dealt with. I’m surprised Pica pulled out a massive katana, I didn’t think he was a swordsman given the contrasting Devil Fruit he uses and his general appearance, but seeing how he is one, his match-up with Zoro is a fitting one, a battle between swordsman. It will be interesting to see how Pica incorporates his stone-assimilating power with his swordsmanship. And with Zoro finally aware of the real body of Pica, it will be exciting to see him unleash and whether he will don the bandana in this fight.

I am curious about Sabo’s whereabouts, where exactly did he head off to and what plan does he have in mind to liberate Dressrosa from Doflamingo? Sabo certainly does have a plan as his intention outside winning the Mera Mera no Mi for being on the Island is to liberate Dressrosa. Well whatever he is doing, it does appear to be something key in helping save Dressrosa.

I am also waiting to see what Robin has planned with King Riku and Viola when they reunite with Rebecca, does Robin have a plan to get the citizens of Dressrosa to once again put their fate and trust within their former King and his family? It would help to calm them down if they know they have a leader who can help save them.

With Law realising his initial plans are of no more use, he is finally ready to take on Doflamingo and settle matters from thirteen’s years ago with his own hands. The man who saved Law’s life, Corazon, he became the person Law cared for most in the world and thirteen years ago, he was murdered by Doflamingo. Corazon was Doflamingo’s younger brother and the top executive of the Donquixote Family. With so many of the Donquixote Family members dead, it begs the question, what happened to them? Why did Doflamingo’s mother die and why did he kill his father and younger brother? What drove Doflamingo to do such things? Why is Doflamingo so obsessed with spreading suffering and pain?

What happened to Doflamingo to lead him to murder his family members?

It will be interesting to learn if the rest of the Donquixote Pirates know about Corazon and his murder. The fact that the Donquixote Pirates don’t understand why Law betrayed Doflamingo suggest that they are unaware of Doflamingo murdering his own younger brother. Very much looking forward to the next chapter and a flashback explaining the events thirteen years ago.