With Diane still not being able to recall who exactly Harle Quin is, the promise King and her share is held off until Diane is able to regain the memories that were once stripped from her. The nostalgic feeling of knowing “Harle Quin” could be the catalyst that ends up stirring some lost memories inside Diane and over time those memories may end resurfacing.

Dreyfus, so he really does have “something” inside him, another existence it seems, something that appears to have twisted him. The contrasting nature of Dreyfus’s decisions does imply that an internal battle is ongoing or at least the existence of a disparity between the two minds within Dreyfus. Thanks to Hauser though, Dreyfus was able to call a temporary truce with the threat of the Demon Clan being resurrected on the horizon.

I still wonder who Arthur’s subordinate is and where did she go?

Will King, Diane, Gowther, Hauser, Guila, Jericho, Zeal and Dreyfus be able to save Elizabeth? Will they even be able to find her in the first place? I suppose with Dreyfus in the group, he may be aware of the place Hendricksen would take Elizabeth to for his ritual – underground?

Melodias is able to meet with Arthur and help him combat Hendricksen whom is later joined by Gilthunder. It is interesting to note that the teleporting Holy Knight is connected to Gilthunder in some way, she had stated that she would “send her cute little Knight” to help Hendricksen. I can’t be certain at this point, but it appears to me that Gilthunder’s mother may be the teleporting Holy Knight – like Gilthunder is she aware of the fact that it was betrayal that killed the former Great Holy Knight Zaratras? Will the truth behind the murder of the Great Holy Knight Zaratras come out within this arc? Several Holy Knights and soldiers associated with the Kingdom of Liones have come to learn of the true face of the Holy Knights and its corruption driven by a few. 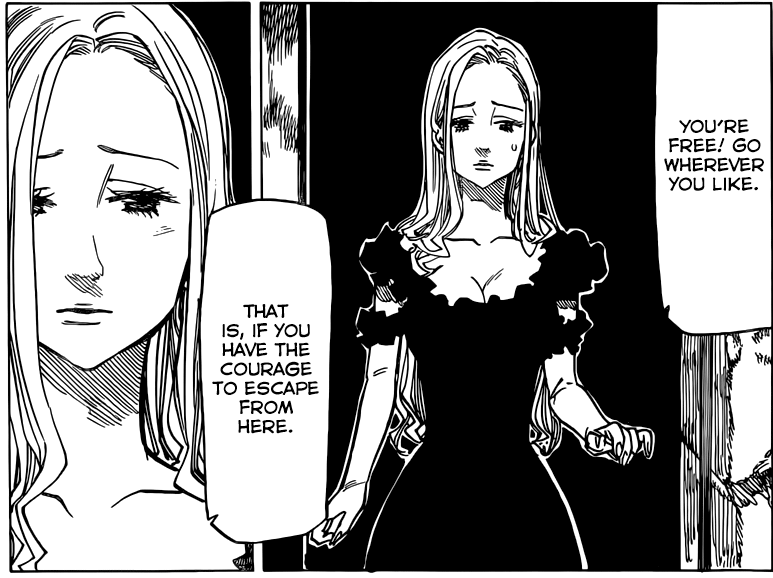 What happened to Magaret?

Margaret does interest me, her inability to set herself free makes me wonder intensely just what story is behind such a darkness. Why does she reject freedom so much? What has she done to force herself within the perception that she deserves to be imprisoned? Was she responsible in a way for getting her father imprisoned and creating the current situation within the Kingdom of Liones? With Elizabeth captured and the door to her fate open, will Margaret rise above her fear and make the choice to save her sister?

Concerning Ban, what a surprise, so he was searching for “The Horn of Cernunnos”, a ritual relic capable of communicating with the Goddess Clan. It has been apparent that Elaine’s death affected Ban in a serious way, but for the guilt he feels to be so immense that he would wish the Goddess Clan to exchange his life for Elaine’s, Ban has still not forgiven himself. Ban may not be an emotional guy, but his actions speak vividly to how he feels inside; regretful and empty. With such a sudden development, I am very curious to see if any Goddess will respond to him and how exactly the Goddess Clan will come into play within the story from now on. Looking forward to the coming chapters and seeing what happens with the ritual to resurrect the Demon Clan and Ban’s request to the Goddess Clan.