One Piece Chapter 746 – Taking Down Doflamingo 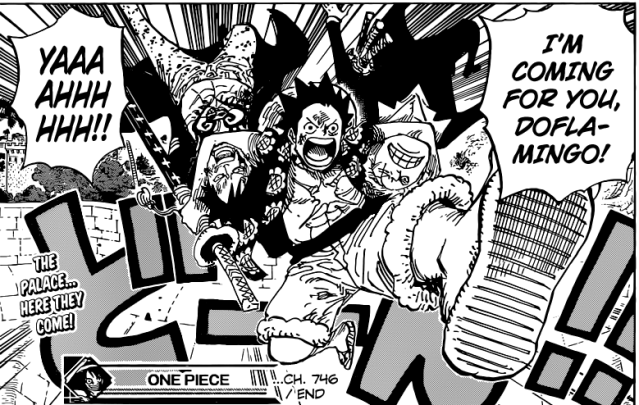 Time for the villain to get a taste of defeat…

What a hilariously epic chapter, I was anxious to see how everyone would react to the chaos descending upon them and the allure of money when Doflamingo mentioned the names on his list, and it looks like all those once eternally grateful to Usopp discarded such gratitude for a chance at earning a few million Berry. Ah what a shame, don’t they know that they are fighting for the losing side now that Luffy has real incentive to want to take down Doflamingo? I am also curious to see what Isshou will end up doing, he did tell Bastille to inform the squads that the Strawhats and Law were still the targets, but I am sure he has something he wants to say to Doflamingo and he probably will when the time comes.

With so much suffering taking place in Dressrosa at the moment and the citizens unable to stop Doflamingo from controlling others to kill their family, friends and other citizens, it is obvious why the citizens were backed so far into a corner that they themselves saw their only option of survival as capturing the “Stars” Doflamingo mentioned, including King Riku and Kyros. The Donquixote Pirates having several thousand members also impacted on the citizens thoughts of rebelling against Doflamingo.

Bartolomeo’s fanboyism, I lost, I lost badly. That one moment there when he expressed his extreme fanboyism over Usopp and Robin turned my enjoyment of Bartolomeo from entertaining to completely hilarious. Sabo’s reaction to Bartolomeo’s fanboyism compliment the hilarity in that scene extremely well. I still can’t believe that the Marines think of Bartolomeo as some vicious demon pirate that guns down innocent civilians, now that we know who he is, it seems so outrageous that he is ranked #1 on the ‘Pirate we wish most to disappear’ list.

There goes the allies Usopp just made…the power of greed

I guess the moment Doflamingo mentioned a way for people to get several hundred million Berry, it was obvious that the once loyal followers of “God Usopp” would revert back to their lustful ways and loss themselves within the zero’s of the bounty reward for capturing the “Stars”. Doflamingo hatred for Usopp expressed itself fully when he listed his bounty, a five star rating eclipsing both Luffy and Law. Five hundred million Berry as a reward for Usopp’s head, and Usopp’s reaction to that said it completely, he most likely had memories of his life flash through his mind at that point. All those criminals, pirates and questionable folk so chummy with God Usopp a moment ago revealed their true colours and turned on him for a chance at the reward. And to think they owe their lives to Usopp, some show of gratitude by them O.o. 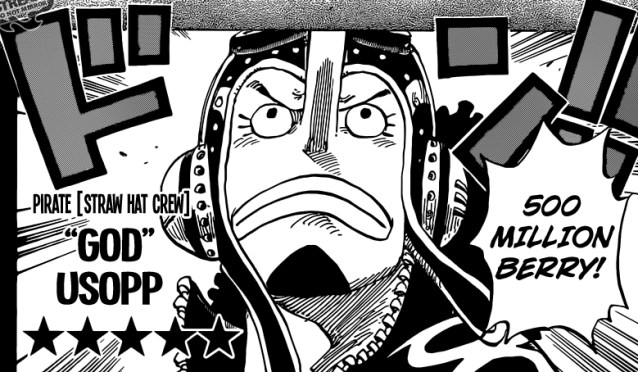 I see Doflamingo learned from his lesson of underestimating “God” Usopp…

Kin’emon is off searching for Kanjuro and I honestly really want to know who the hell Kanjuro is and finally see him. How was Kanjuro able to escape Doflamingo’s capture and can he help the citizens stuck inside the Bird Cage escape to safety? What exactly will be Kin’emon and Kanjuro’s role this arc?

Kyros also went off on his own, likely toward the Palace where Doflamingo is, and he means business. With Kyros being so pissed off at Doflamingo he is not thinking rationally, but Luffy has promised Rebecca (who now realises that Soldier-san was her father all along) to not let Kyros die and to kick Doflamingo’s ass. Luffy has resolved to end this game and put a stop to the suffering ongoing within the country at the hands of Doflamingo.

Law does make a good point that they need Doflamingo alive for Kaidou not to direct his anger towards them, but I suppose with Dressrosa in the state it is currently in, the first priority is stopping Doflamingo and than worrying about how their actions have affected the actions of Kaidou and the other Yonkou.

Great to see Luffy charge straight for the Palace with Zoro and Law being dragged along =P. Kyros will also probably end up at the Palace and I wonder if Isshou will also show up their to have a word or two with Doflamingo. Looking forward to the next chapter and seeing how the chaos within Dressrosa develops and concludes.

This entry was posted in One Piece and tagged Doflamingo, Dressrosa, Law, Luffy, Manga, Oda Eiichiro, One Piece, Usopp, Zoro. Bookmark the permalink.