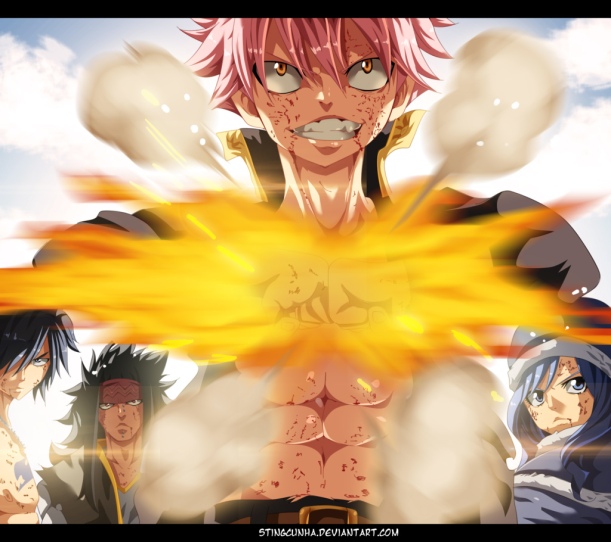 How impressive it is that Lucy, while having the Celestial Spirit King summoned, was able to cast her most powerful magic to take out Jackal. Her actions these past few chapters has really showcased how reliable and resilient she can be, despite all the challenges she encountered, Lucy, with the aid of her beloved spirits, was able to scale those walls and illuminate the darkness with radiating light. The Celestial Spirit King’s Galaxia Blade directed the radiance of the stars onto the darkness imprisoning Fairy Tail, ultimately eroding it away and effectively saving Fairy Tail. With Alegria dispelled, it is time for the rest Fairy Tail to carry on what Wendy, Mira and Lucy gave their all to stop, that is Tartartus.

END_OF_DOCUMENT_TOKEN_TO_BE_REPLACED 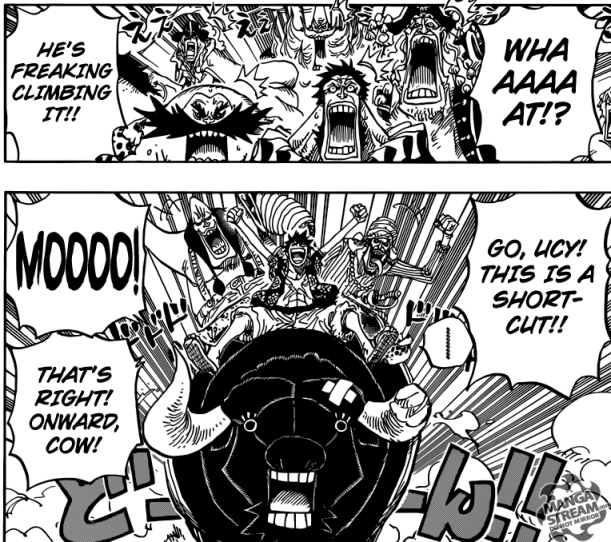 What a crazy and dysfunctional group of allies =P

The Donquixote Pirates just got a taste of “God” Usopp’s divine retribution, thanks to heavenly light “God” Usopp has basked upon the weary souls imprisoned by Doflamingo, they now fight to repay the “Heavenly” miracle they were saved by. Each of them now on route to the palace Doflamingo is present in. Additionally, Law has finally decided to open up to Luffy regarding his past and his reason for standing against Doflamingo. Doflamingo had a younger brother, Corazon, he saved Law at some point in the past and was later murdered by Doflamingo for reason yet to be revealed. Has Law decided to take vengeance upon Doflamingo with his own hands?

END_OF_DOCUMENT_TOKEN_TO_BE_REPLACED

Declaration of War – colour by IITheYahikoDarkII

Well dam, how many more twist can there be within this arc before it ends, because I really was not expecting Kaguya to pop up. Out of no where, a new element has been thrown into the conflict between Ashura and Indra, and this time it is their grandmother, Kaguya. To think the Infinite Tsukiyomi was just a set-up for Kaguya to entrap the people of the world to the Shinju. Despite Madara’s intentions of wanting to create a “peaceful” world or at least the illusion of one, Kaguya has other ideas and people happiness and the illusion of “Heaven” is far from what she is intending. Given that we know that Kaguya was twisted by the powers she wielded once she consumed the Shinju fruit, it is safe to say that with her return, things do not look good.

END_OF_DOCUMENT_TOKEN_TO_BE_REPLACED

The Head of the Special War Powers, Kurosaki Ichigo – colour by i-azu

What a shame, I was hoping to see Candice, Liltotto, Meninas, and Giselle in a more evenly matched battle, but with them now going against Ichigo, I doubt we will get to see them highlighted much more =(. It was though refreshing to see some Quincy use a bow for a change, it has been so long since a Quincy last wielded one. Amusing that the four female Sternritter believe they can take Ichigo on even though they realise he is the head of the special war powers. It won’t be too long before they begin they rectify their thought process with Ichigo drawing Zangetsu.

END_OF_DOCUMENT_TOKEN_TO_BE_REPLACED

Her “courage” and “resolve” laid bare for all to see

What a fantastic chapter, no matter what the result ends up being, the coverage Megumi has gotten through these last three chapters has been incredible, especially how it highlighted her ability to stand beside the main character as a serious chef who is not afraid to meet her opponent head-on. Just like how Souma has the courage to challenge any style of cooking, Megumi is showcasing herself as being the same, challenging Ryou to a serious flavour match despite knowing that rich flavours are his forte.

END_OF_DOCUMENT_TOKEN_TO_BE_REPLACED 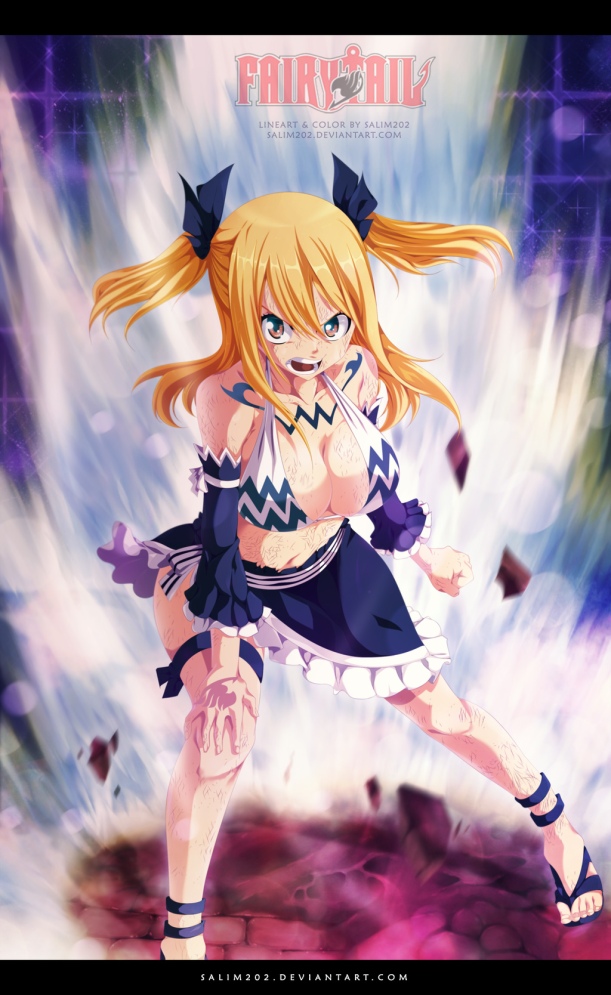 In a state of grief and sadness at the reality of losing one of her closest friends, Lucy, upon the realisation that there is still a role for her to play in saving the rest of nakama, pushes aside the dejecting pain and channels the power the Celestial Spirit King has bestowed upon her. Aquarius, despite having returned to the Celestial Spirit World, her power now surges inside Lucy and thanks to it, Lucy is able to materialise her resolve of wanting to save her nakama into action.

END_OF_DOCUMENT_TOKEN_TO_BE_REPLACED 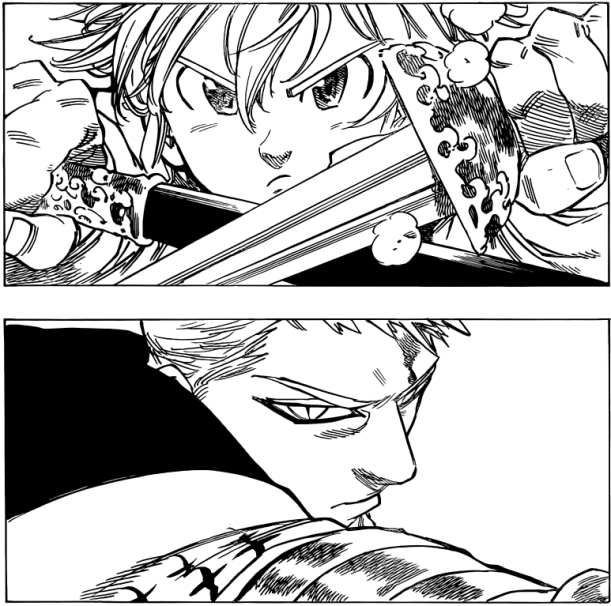 END_OF_DOCUMENT_TOKEN_TO_BE_REPLACED

I don’t know whether to laugh or cheer O.o

Well I’ll be, such a chaotic and dysfunctional group of people moving together towards a common goal, Doflamingo. I don’t know if the Colosseum Fighters are truly grateful to Luffy and the Strawhats or whether they just hate Doflamingo, but either way, a real problem has arisen for Doflamingo and this time, more than one person is out to see his head roll. I am completely shocked this “alliance” can still function with so much discord and ego involved, I guess the fact that they are still in way fighting alongside each other is testament to how much of a bastard Doflamingo is.

END_OF_DOCUMENT_TOKEN_TO_BE_REPLACED

Kaguya’s twisted plan has finally come to pass, what exactly did she have in mind when she created such a jutsu?

So it has finally happened, Madara has activated the Infinite Tsukiyomi and with it he has entrapped all of the worlds population inside a genjutsu save for the Edo Tensei Hokages, Sasuke, Naruto, Sakura and Kakashi. I also have a suspicion that Tenten may have also avoided falling under the Infinite Tsukiyomi’s genjutsu. With the Treasured Tools of the Rikudou Sennin becoming a necessary element in Madara’s demise, Tenten will have to find a way to utilise the tools or at least deliver it to someone who can use it.

END_OF_DOCUMENT_TOKEN_TO_BE_REPLACED

Love this colour spread, such a delicious use of colour

Aw, I was really hoping that the characters to appear from the flash in the sky were Sado, Inoue, Nel, Grimmjow and Kisuke instead of Ichigo =(. Given that the story of Bleach is approaching its end and there isn’t much opportunity for Sado and Inoue to be highlighted in battles, I did believe that this stage with Candice, Liltotto, Meninas, and Giselle was a perfect stage for them to be highlighted in battle. Sado, Inoue, Nel and Grimmjow would have also made great opponents for these female Sternritter to be highlighted as well. With Ichigo having arrived, a one-sided battle seems to be the destiny awaiting Candice, Liltotto, Meninas, and Giselle. Although I could be wrong and the female Sternritter could put up an exciting and intense battle against Ichigo.