The regret of failing to protect a friend…

A friendship twisted by unfortunate and tragic circumstances and a fate conflicted by emotion. King and Helbram, a bond of brotherhood divided by the cruelty of man and their insatiable curiosity. Each behind their individual reasons now stand against each other to express the depths of their regret onto the other. Torn asunder from the love he once embraced humans with, betrayal and torment now drive Helbram to extinguish all that he once loved. And King, with repentance weighing heavy on him, moves forward to end the suffering of his best friend. In the end, the totality of the circumstances erupt into sorrow and sadness.

So King’s real name is Harle Quin, how interesting, but even more so were the origins of his sin and the revelation of the circumstances which tore King and Helbram into conflicting paths. Best friends and innocent to the “world”. The greed of man and their desire for prolonged life saw suffering cast upon Helbram as he watched each of friends suffer in pain as they had their wings slowly ripped off before succumbing to the embrace of death and passing on. The darkness born in Helbram that day was a natural almost reactionary effect given the circumstances and because of that I find myself reluctant to really perceive Helbram as being completely wrong in the path of vengeance he began to travel from then on.

The origins of the darkness which twisted his innocence

All the while Helbram pursued to close the void ripped open in his heart with the deaths of human, King had lost memories of the who he was before being found and saved by a young Giantess called Diane. Through the centuries spent together, they became friends and even started to develop feelings for one another. The oddity of human life and the limitations it held in terms of length intrigued them and helped them to see a side of humanity which they found quite embracing. And inspired by the humans love for each other, Diane and King made a promise for King to always love Diane regardless of whether he is by her side or not. In the end, after regaining his memories and realising the extent of his sin, King unable to fulfill his promise to Diane, made her forget about him, but resolved to never forget her and to always love her. And as if through fate, King handing himself in to the humans to accept justice for his sin allowed Melodias to first encounter him. 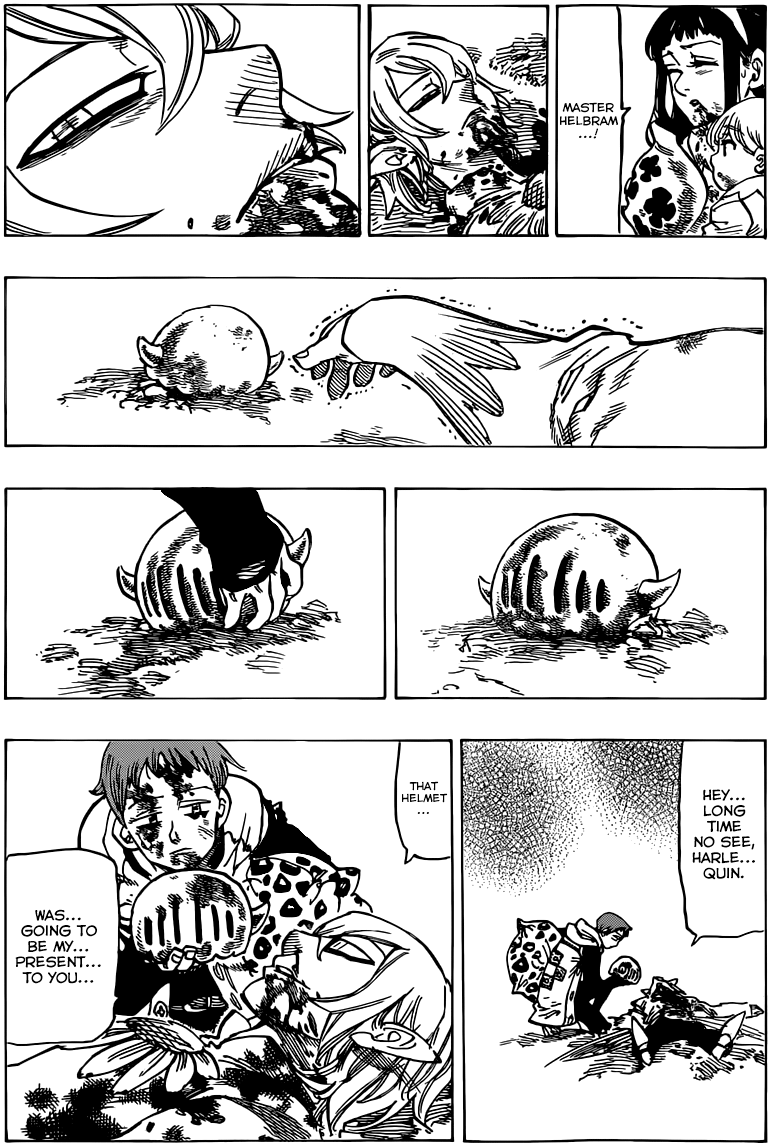 The farewell between friends

From the moment King knew the only way to end this fight was to end Helbram, the state of his mind and his body changed completely. Wielding the power of the Sacred Tree, through Chastiefol, King was able to repel Helbram’s attacks and land a decisive blow onto Helbram felling him. With the origins of King’s sin being revealed, the battle became tinged with sadness and woe as ultimately it were tragic circumstances which tore these two best friends apart and onto separate conflicting paths. Helbram’s farewell to King and King’s farewell to Helbram expressed the very sorrowful nature of the past these two share. In the end, with a heavy weight on his heart, King fulfilled his promise to his best friend.

With Diane seemingly remembering Harle Quin and likely the promise King made with her, what exactly will happen between the two? Looking forward to the next chapter.