Sabo reveals himself! The second-in-command of the Revolutionary Army

What an unbelievably amazing chapter that was thoroughly satisfying to read. Sabo was able to make himself the victor of the Corrida Colosseum and finally consume the Mera Mera no Mi. Those “dragon” themed attacks of his can now become even more fantastical and magical with the Mera Mera no Mi fire powers. Back down in the Underground Trading Port, Usopp has become a god to those cast into the pits of despair when they were enslaved by Doflamingo, but now with Usopp having saved them; their joy, gratitude and happiness is all directly associated with Usopp. From a lie told out of insecurity in the past, Usopp now has the army he always dreamed of having. And their first target of wrath is the SMILE factory.

Ever since seeing Sabo’s “Dragon’s Breath” attack in the previous chapter, I was sold that the Mera Mera no Mi would compliment his abilities so incredibly well. So I am beyond ecstatic that Sabo was able to coordinate a plan to become the victor of the Colosseum as well as sink the arena ground towards the Underground Trading Port. There was some wonder about whether Sabo would actually consume the fruit even if he won it, but that was rapidly put to rest when Sabo wasted no time eating the Mera Mera no Mi after claiming it. And just as quickly, he put those powers to use but blowing a hole right through the arena floor causing it collapse towards the SMILE factory.

All the while that was happening, Hajrudin had picked up Usopp and displayed the form of the “toys” savior to everyone there; their hero – CAPTAIN USOPP!! Rays of light broke through the suffocating darkness as the Colosseum floor began to crumble towards the SMILE factory and as if a divine being had appeared in human form, the golden glow of the beaming sun shone from the heavens right on top of Usopp, painting him in a benevolent and majestic light. Just like everyone there witness to such a spectacle, I was left speechless at the grand appearance of Usopp and the “godly” fortune that had decided to embrace him. The lie Usopp told several times throughout One Piece concerning him having 8,000 followers, that lie has finally come true…It is too insane to even believe but it happened! And in an incredible way at that!

Burgess is pissed and rightly should be, he lost! Blackbeard sure won’t be happy. Diamante, poor Diamante, he thought the fruit wouldn’t be won by anyone else beside himself, guess he underestimated the competition and but hopefully he will get a good taste of it now with the Colosseum contestants charging towards him.

And finally, Oda-sensei reveals Sabo’s full appearance and title in the Revolutionary Army. To think Sabo is already the second-in-command of the Revolutionary Army at such a young age, what a guy…I knew he was good but now I am even more impressed. It is great seeing Sabo in that outfit again, it matches him extremely well, especially that top hat and goggles. I was moved to the brink of tears when Sabo started talking about Luffy and how proud he is of him, I seriously hope the two of them get some time to catch up later. Now that Sabo, Koala and Hack are in the heart of the Underworld, it is going to be exciting to see how they deal with the SMILE factory and the weapons production factory.

Kyros, man he is awesome, he dispatched of Buffalo so easily and in such an amusing way – throwing him out of the palace. Where is Lao G now, in his human form, I highly doubt Kyros would lose to Lao G now.

Oh Luffy, you really are one of a kind

Luffy and Law, what an amusing reunion, especially with Law still now understanding the stubbornness of Luffy. Law wanting to end the alliance but Luffy refusing and only agreeing to end it when he sees fit, that was hilarious. I love seeing someone as serious as Law get such a twisted expression on his face when he reacts to someone like Luffy. And Viola, she is so incredibly useful and awesome, I guess those ten years working under Doflamingo has allowed her to become such a thorough woman, preparing the keys to the Kairoseki cuffs in advance. But Luffy carefully trying to fit the key into the keyhole on the cuffs, that was beyond amusing. 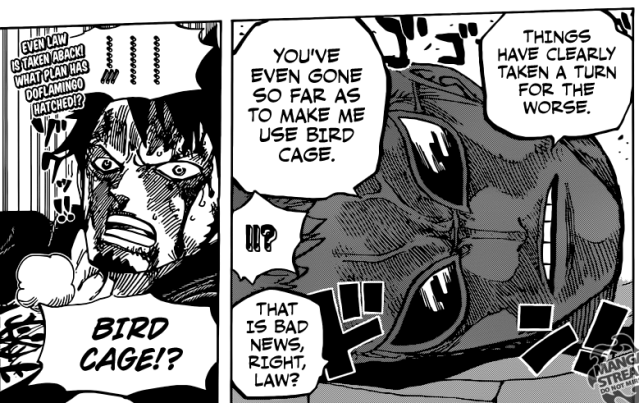 “Bird Cage” – to think Doflamingo had a back-up plan still at this point, what a fiendish man

A shame Pica ended up appearing, Law will have to stay chained for a little while longer it seems =(. And Zoro…how will he ever make it to he Hall of Suits with his sense of direction…where exactly will he end up (I’m afraid to imagine the possibilities…)? And Doflamingo, so he IS alive! What a troll, he really was shocked head of heels, but why is he still alive after being “beheaded”? I do still wonder if Doflamingo is “using” Law’s power in a way =/. But I guess it comes down to this “Bird Cage”, what is it exactly?  And if “Bird Cage” is something physical, will Zoro “find” himself to it? Ah this arc really has been bursting with intensity and excitement. Looking forward to the next chapter!

1 Response to One Piece Chapter 744 – Sabo Makes His Move