One Piece Chapter 743 – And It Collapses…

Way to go Usopp, you did it! And what a cool way of capitalising on the situation

The house of cards Doflamingo has meticulously built over the course of ten years has finally collapsed with the removal of one key card in the house, the card known as Sugar, and he has none other than the secret weapon of the Strawhats aka. Usopp to thank for such a situation. Chaos usually isn’t a good thing, but the chaos descending upon Dressrosa given the circumstances surrounding it make for such a sweet sweet sight. The Donquixote Pirates have messed up and Doflamingo as the “Joker” with all the cards crashing down around him is going to have hell to pay, well he has already lost his head to it, I do wonder though if he has also lost his life because of it.

Watching Robin and the rest of the toys turn back was such a satisfying feeling, after Doflamingo had imprisoned them for so long, they finally have a chance to pay back such hospitality, with interest of course. With Trebol still stuck in the Underground Trading Port, I wonder if he will be defeated and by whom.

Usopp giving the cool guy thumbs up “everything went according to plan” was such a badass moment. Oh Usopp, even when at death’s door you still have the audacity to crack a joke and lie, you sure do know how to capitalise on an unfortunate situation. The fact that the Tontatta dwarves bought that lie as the truth only added to the magical effect of that scene. Still, Usopp signaled in the beginning of the fight but leaving the rest of the work to Luffy and Co. to handle now that Doflamingo’s true form is revealed.

The hero of Dressrosa, finally this man is remembered!

Kyros, what a guy, without hesitation he went on the offensive as soon as he got his real body back. Those ten years of sorrow and regret, everything built to this moment. Viola reaction and expression after realising who Kyros was signified exactly how much Kyros and the rest of the toys had been through. Even forgotten, Kyros still stayed by his beloved daughter’s side, always keeping watch over her and never leaving her alone. King Riku’s reaction only added to the moving nature of Kyros’s return to human form.

And just as if frozen in time for ten years, Kyros once again charges at Doflamingo ready to take his head, and with that slash carrying the weight of ten years of regret and sadness, Kyros manages to behead Doflamingo. As for whether Doflamingo is actually dead, he probably isn’t as this would be too quick of an end for such a major antagonist in One Piece. After everything Doflamingo has done, to be defeated so quickly, it seems a bit anti-climatic even though the chapter was full of climaxes. Law’s ability can sever body parts of a person and keep them alive, so that is possible, but why exactly would Law prevent Doflamingo from being killed if Law could in fact use his Devil Fruit ability =/. Does Law want some information from Doflamingo before he dies? Or does Law want to reveal Doflamingo’s true colours to whole world?

It could just be that Law indirectly saved Doflamingo. During the Law and Doflamingo fight, Law may have been able to “behead” Doflamingo but since than Doflamingo has been keeping his head attached with his strings and now that such a chaotic situation has arisen, he has utilised Law having severed his head to his advantage by allowing himself to separate his head from his body and avoid the ten year weighted slash of Kyros. That does sound plausible and would paint Doflamingo a more cunning and shrewd villain than he already is. 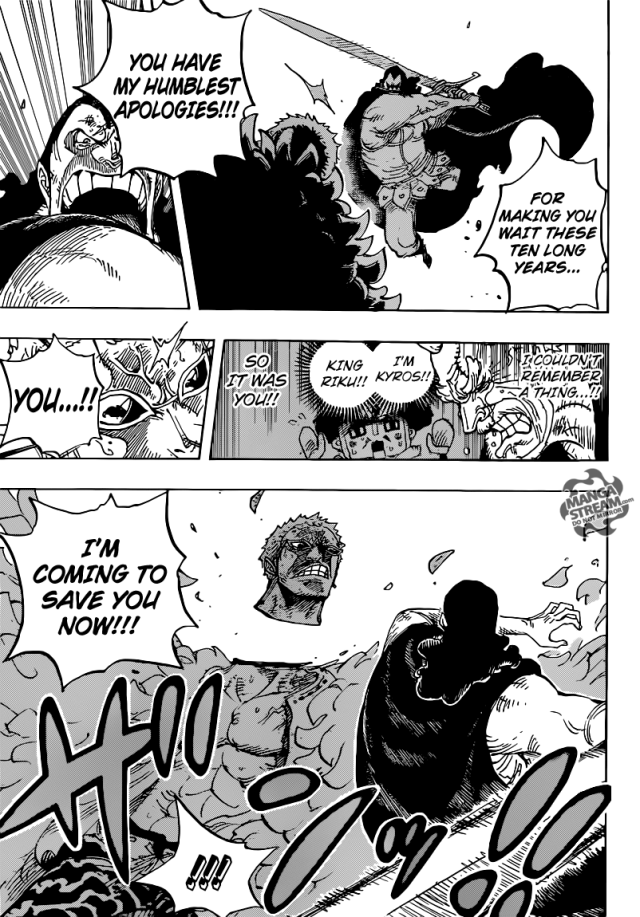 For Kyros to apologise to the King for taking too long as if enduring the suffering he has been through as normal, what a guy Kyros…

Rebecca, she has finally remembered, during all those ten years, her father was always with her and close by. Kyros never left her and always looked after her. Sabo understood that commenting how Rebecca was just a puppet used by Doflamingo. Sabo even understood that everything had a core and with Usopp successfully causing Doflamingo’s house of cards to collapse Sabo is now ready to reveal exactly what kind of person Doflamingo really is. The core corruption in the Underworld is right underneath the Corrida Colosseum and Sabo intends to bring it all to light for the whole world to bear witness to, the true perverse nature of Doflamingo and the darkness of the world.

Sabo has made his move and the climax of the arc fast approaches. And what exactly of the Mera Mera no Mi, what will happen to it? Sabo did state he is ‘ready to win this’, which could mean that he intends to win the Mera Mera no Mi on top of helping save the country. Looking forward to the next chapter of One Piece.