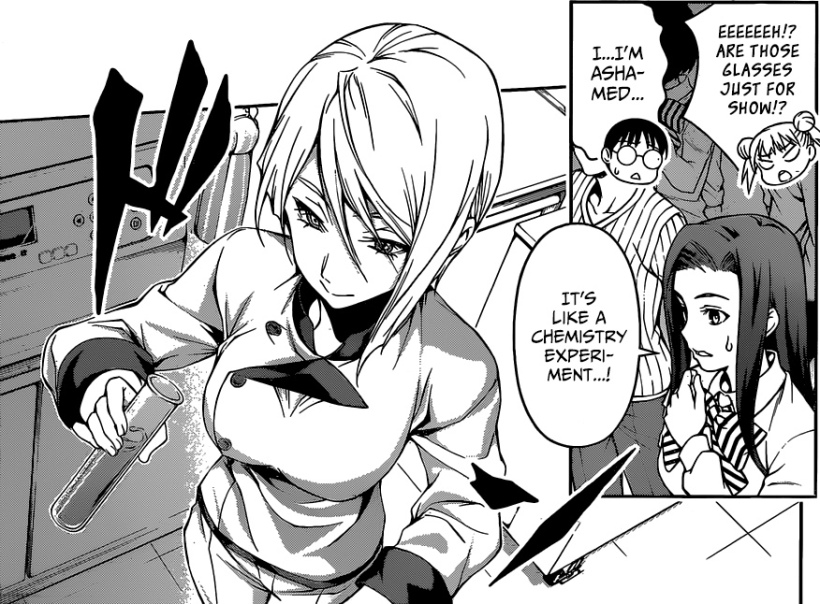 The world of cooking really is vast, not just cuisine styles become relevant in creating memorable dishes but the form of the dish also ends up playing a major part in how satisfying a person perceives the dish to be. On top of Souma challenging different cuisine styles in the manga so far, he is now faced with having to utilise the form of the dish to create an impact overwhelming the judges before they even end up being engrossed in the flavours. Alice being his opponent may just end up being the most advantageous event he has concerning the Autumn Election. If Souma can surpass the “hurdle” called Alice, his cooking really will be taken to another dimension, one that can express the different layers of skills he has acquired so far.

There is no question that Alice is the favourite to win, especially after her display in the preliminaries and her inhuman ability to mold food into works of art that fascinates the mind as well as the palate. The fact that not even Zenji was able to identify many of Alice’s equipment is testament to how accomplished she is a Molecular Gastronomy chef, and how dangerous..

It really is incredible how talented she is at cooking; not only having the culinary expertise but also the artisan expertise. And hell, she can freaking chop with her eyes closed! It was pretty enjoyable to see Alice have fun with Souma during their conversations, her open and playful nature is one of her charms to her personality – Erina could learn a thing or two from her about opening up =P.

Mysterious excitement…how will Souma replicate that feeling into his dish?

Ryouko prior to the Autumn Election preliminaries hasn’t had much time to be focused on during the story, so I am glad time was taken to include her in Souma’s preparation for the match this chapter. It was cool how she helped identify the qualities that make Alice’s cooking and dishes so memorable and did end up indirectly helping Souma come up with an idea to challenge Alice – inspiration really does arise out of unexpected situations. It was also great to see how she reacted to Souma’s cooking and to his “I’m going to make a new weird dish” face, amusing indeed.

No risk, no reward eh?

Even though we had seen Souma’s base dish he intends to cook – a Nori Bento, I am curious to see how he incorporates the idea behind the candy bag into his dish, as well as how he evolves what he had already created. Souma may not be a recognised genius like Alice or Erina, but he really is quite something when it comes to cooking and facing insanely stressful situations.

Back to Alice, her dish…surrounded by mist inside a transparent dome, just what fantastical plate of food is waiting for our eyes to gaze upon? What “bento” has she created? Ah, I really am looking forward to finding out. Even though Alice is confident in her abilities, I’m sure she understands the level of unpredictability and fight Souma brings with him, so despite clearly holding the advantage in almost everyone’s eyes, I do expect Alice to have pushed herself more than she has in the past now that she is against Souma, someone whom she does recognise as a skilled chef.

2 thoughts on “Shokugeki No Soma Chapter 63 – Creating An Impact”