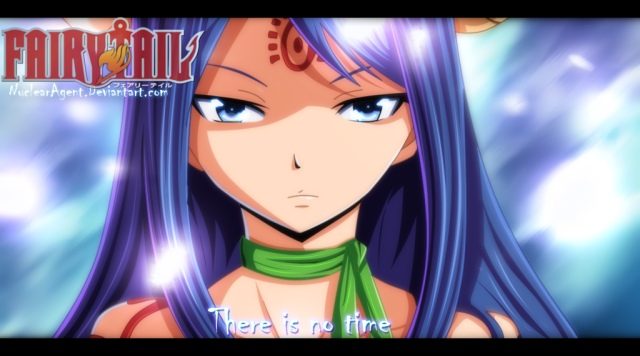 Oh Kyouka, I love how she reacted when she realised she may have been a little too hasty in killing Crawford and losing the ability to activate Face remotely, that being, not much concern at all =P. Still what an intensely exciting chapter; Minerva’s demon metamorphosis is complete, something ominous is about to happen to Mira, Cana finds Elfman setting the lacrima, Face is above Magnolia, and the real twist of the chapter, the Fairy Tail building EXPLODES! That cliff hanger really has me hungry for more Fairy Tail, can’t wait for the next issue!

Thanks to the release of Face’s seals, the mobile Island, Cube, is shaken and as a result, Natsu and Lisanna were able to get their hands on a sword. Potentially they may be able to escape and help save Mira and Erza. Quite awesome that Lisanna is getting focus in this arc, as in the previous arcs, she didn’t really highlight much at all, even though she is a relevant character in the story and to Natsu.

Kyouka, she is so sinfully and wickedly charming, even though I dislike what she has been doing to Erza, there is a allure to how dominant she has been highlighted so far. Thanks to her, Tartarus have the upper hand now in this arc, and have at least one new member within their ranks – Minerva, with a potential second member awakening soon – Mira. Kyouka’s sadistic methods in trying to manipulate people is also a very appealing quality in a villain – how she used Crawford and how she tried to mentally corner Erza by using Jellal and Mira’s lives.

Mira in trouble, will Natsu and Lisanna be able to save her before Lamy gets her way?

Lamy, that was an…interesting introduction she had, what a quirky character she is with her mellow to serious attitude shift when making a point at the end of her statements. Interesting to learn that it is Lamy who handles the designs of the people subject to the demon metamorphosis. Lamy changed Tempesta’s design from a humanoid goat appearance to a bishounen one, lol talk about imposing ones personal preference onto others. And things just get more extreme for Lamy as she finds herself overcome with complete jealousy and hatred when looking at Mira and her pretty face (and sexy body). It is going to be interesting to see if Natsu and Lisanna can save Mira before Lamy does anything damaging to Mira’s appearance.

The wicked Minerva reborn as Demon Minerva – colour by belucEn

Also regarding Minerva, I really do like her character and the design her character had prior to being captured by Kyouka, so I was very anxious to see how Minerva would end up looking after her demon metamorphosis. I’m glad there wasn’t anything drastically changed in Minerva’s overall appearance; her hair buns transformed into horns, she now has a dark mark covering her right eye and extending down towards her neck and diagonally downwards across to the left side of her face. There is the change in her hands which give her a more demon look, and while I would have preferred if Minerva kept her normal hands, I actually don’t mind the demon looking claws she now has. Overall Minerva looks more tactical now, given her darker look and the “eye-patch” mark. On the subject of the marks Minerva has, I love how the marks around Minerva’s body give her a more edgier look then before. With the increase in power Minerva now has at her disposal, I am intrigued to see what she is going to do next. Has Minerva mentally remained herself, or has Tartarus incorporate some new additional “features” within her mind, well whatever it is, I certainly do hope that the hatred Minerva bears for Erza will override anything “damaging” Tartarus has done with Minerva mentally. 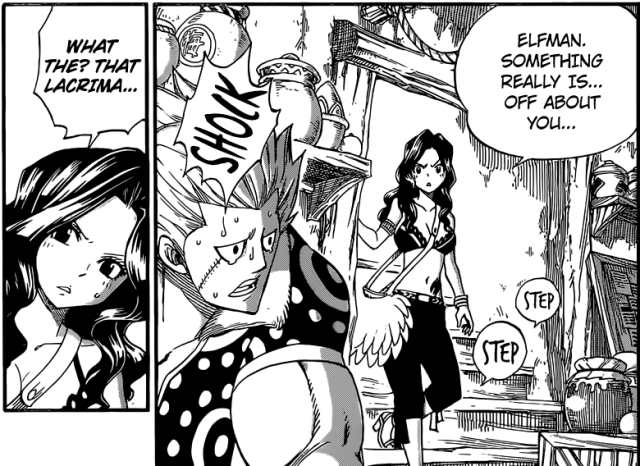 Will Cana be able to do anything to stop the lacrima from killing the Fairy Tail mages?

Cana, as expected she was still suspicious of Elfman and followed him and subsequently found out about the lacrima Elfman was planting within Fairy Tail. It is pretty obvious now that while Elfman may have submitted to Sayla’s demands, it is more Sayla’s macro abusing the hesitation and fear within Elfman to manipulate him into planting the lacrima in the Fairy Tail headquarters and in trying to immobilize Cana. The cliff hanger of the chapter shows the Fairy Tail building blowing up, so given that scene, it does seem apparent that the lacrima did blow up. It is going to be interesting next issue to find out if Fairy Tail survive and how they ended up doing it. I wonder if Cana will borrow Fairy Glitter again and use it to reject the blast from the lacrima Elfman planted =/.

If Fairy Tail do survive, they in an optimal position to launch a counter attack on Tartarus and their Cube Flying Island. One other thing that bothers me is the secret lying beneath the Fairy Tail building, what exactly is it and will it come to the guild members attentions next chapter? The fact that the next chapter is titled “The Song of the Heavenly Dragon” leads me to believe that Lumen Histoire, which is hidden underneath Fairy Tail, may have something to do with what happens next chapter and ultimately saves Fairy Tail. Very much looking forward to the next chapter.