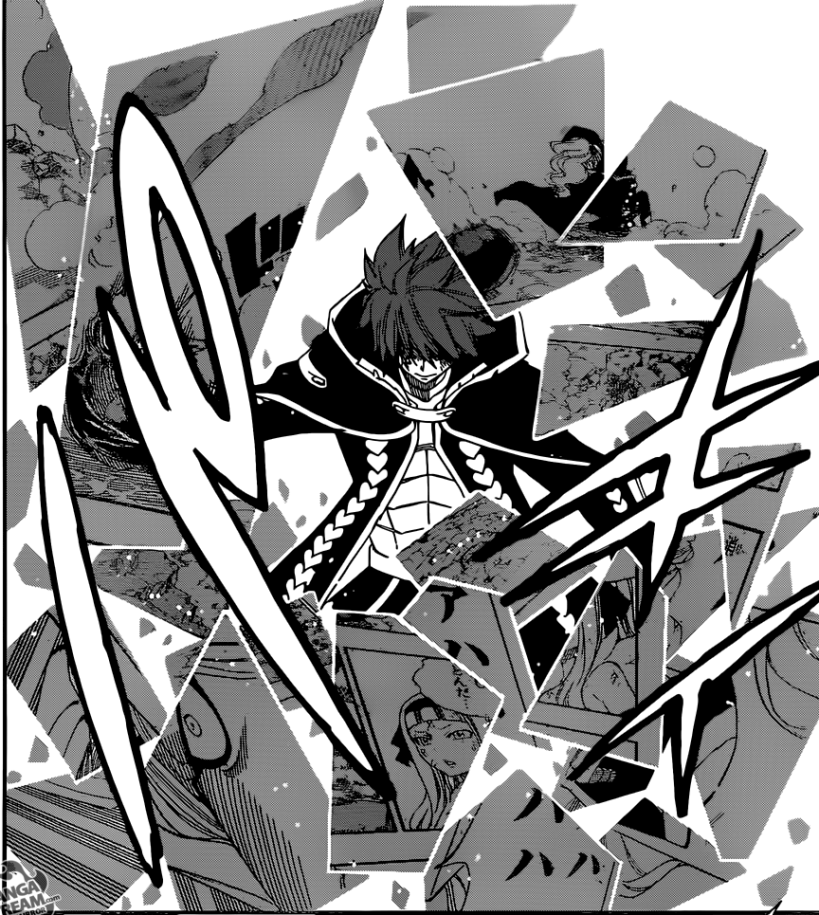 So Jellal really was caught inside Midnight’s illusion, thought as much since none of the  Oración Seis members were rendered unconscious to remove the seals on Zero. But wow, Jellal crushed his own eyes to negate the effects of the illusion on him, what a badass. Following it up with the attack he was prevented from using against Jura during the Grand Magic Games Arc – Sema, which completely defeated Racer, Cobra, Angel and Midnight. Crawford this chapter, what a fool, what made him think that the demons trusted and valued him? They only valued his abilities that allowed them to get their hands on the keys sealing the magic weapon, Face. I guess Crawford gets his just desserts for being so overconfident and overestimating his own importance – stabbed right through the chest by Kyouka. With face’s seals broken and it now open to activation, looks like we may really get see what will happen to Fiore when magic is removed entirely.  Great chapter.

Jellal like the boss he is dispatches of Midnight’s illusions so nonchalantly even though he had to crush his own eyes. And now we know why Ultear prevented Jellal from using his Sema spell during the Grand Magic Games against Jura, it would have on top of revealing who Jellal really was (he was posing as Mystogan at the time), destroyed the entire Colosseum. None of the Oración Seis members could do anything and they themselves are strong and capable mages in their own right.

Looks like Crime Sorcière may be getting some new members

Got to love how Jellal refused to kill them or send them back to prison and instead invited them into the Independent Guild, Crime Sorcière. I was expecting Crime Sorcière and Oración Seis to form an alliance but I hadn’t considered the Oración Seis members completely joining Crime Sorcière, though now that I think about it, that is actually an awesome development. Nice to see Jellal seeking their help in fighting Zeref, which will mean fighting Tartarus.

Crawford, that guy…why does he have such an amazing magic? His Super Archive magic is incredibly useful and open to abuse. Wasn’t expecting the Organic Link Magic to be able to be transformed into a key and transferred on to another person. But at least this makes things quicker and more unexpected – the potential activation of Face.  Crawford got what he deserved, he made his bed allying himself with Tartarus and now has to lie in it, dying by being stabbed by one of the demon’s he allied with. It is almost an amusingly fitting end he got, but if not for the fact that Tartarus now holds almost all the cards in the game they are playing, it would have been.

Going to be interesting to see what Natsu, Lisanna, Mira, and Erza do now that Cube is heading towards the location of Face. If Levy is able to track Cube, then the whole of Fairy Tail may be able to make it to Face before Tartarus activates it. The issue at hand though is Elfman and whether the lacrima Sayla gave him will end up slowing Fairy Tail down if not destroy them.

I actually wouldn’t mind seeing Face activated just so I can see how Fairy Tail and the magic world in general would fare against Tartarus without the ability to use magic. Would Treasure Hunter’s guilds become more relevant and would those wielding Lost Magics (including Dragon Slayer Magic) be affected completely by Face’s magic nullifying effect? The chaotic and dark situation that could arise from this arc does have a charming side to it. Anyway looking forward to the next chapter.