The ever-growing power who is an advent of war

That came completely out of nowhere, to think such a magnificent chapter was waiting for us right after the Mask de Masculine arc (it practically felt like one given how grating Mask de Masculine’s character was), great work Kubo-sensei! Anyway back to this weeks chapter, it managed to tie together so many hanging plot points; from why Yhwach was doing nothing while his Sternritter die, why he is such a special Quincy being noted as the ‘origin’ of Quincy, and what direction the story of this arc will end up taking. The stakes just upped and it has become more complex than Ichigo merely defeating all the opponents he faces, how will he now deal with the reverse Quincy ability Yhwach was born with?

That flashback, how incredibly interesting, I am shocked and completely impressed. Born with nothing yet capable of so much, Yhwach’s ability to bestow his soul onto others and have it returned back to him with the knowledge, experiences and talent of the people who had once received his soul is such a fascinating ability. The creative and complex nature of it has me excited, especially with how it now changes the whole perspective of the war being waged within Soul Society. Yhwach is effectively a loan with interest! Sure does make the saying “don’t touch what you can’t afford” relevant here! =P. 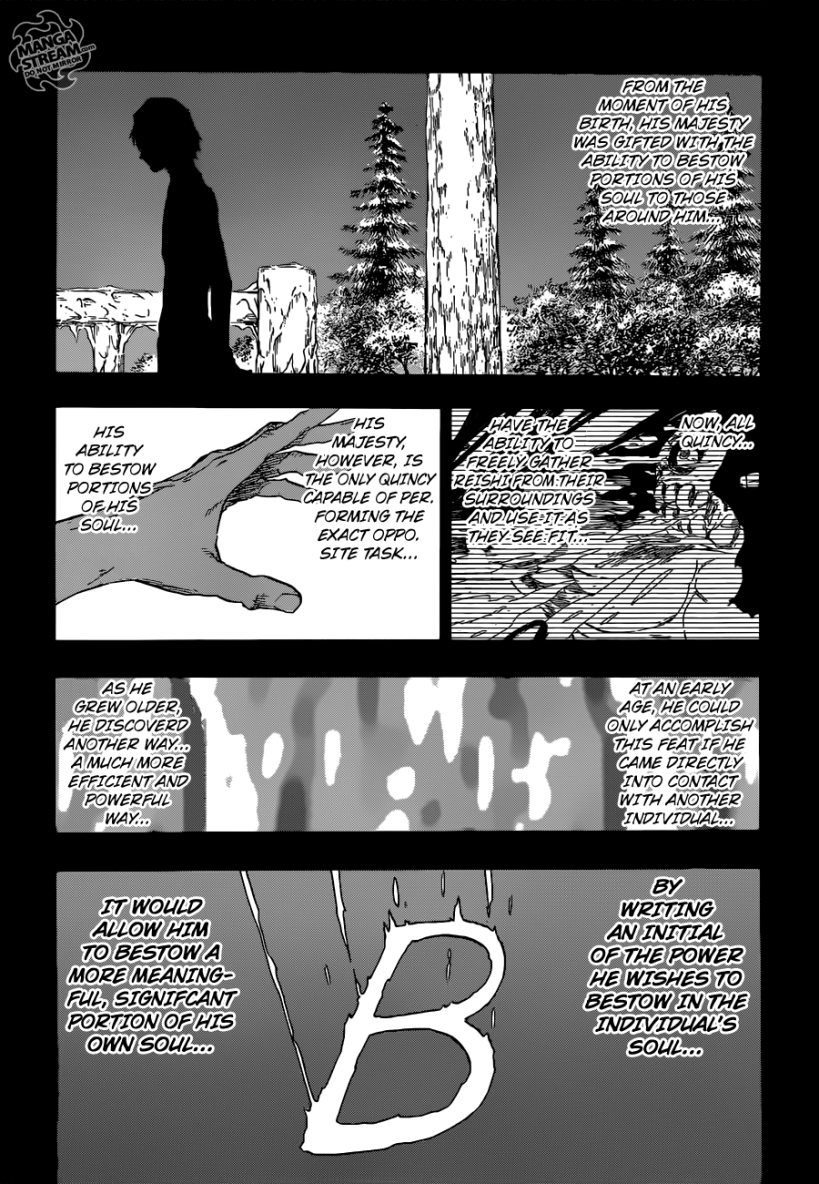 What a fascinating ability…

A villain getting stronger just by sitting on his throne, this is a first. Still smart of Yhwach to utilise his ability in the ways he has; writing the initial of the power he wishes to bestow on the target inside them and on top of being a more efficient way of bestowing his powers, he is able to bestow a larger portion of his soul making the target stronger and effectively making himself stronger when the portion of his soul within the target returns to him. Though, I wonder how he is able to contain such a massive amount of essence from others within himself, are the regressive effects of his natural state that draining to his soul?

Would suck for Yhwach when all his enemies are defeated and he is unable to wage war on anyone…curious to find out if he has plans for prolonging wars or creating a never-ending war in order to supply his soul with essence preventing himself from reverting back to his original state. A tough rope to balance on I have to admit.

One has to wonder though, with Ichigo having Quincy blood and being connected to Yhwach, would the fact that Ichigo has a Hollow side of him integrated so intimately with his soul and Quincy essence, cause Yhwach to suffer a fatal consequence once he does absorb Ichigo’s essence. Hollow are effectively poison to the Quincy, as they have no natural defense against the Hollow. With Ichigo’s soul merging the Hollow and Quincy essence so integrally with one against, it does seem likely that if Ichigo “dies” and the Quincy essence is returned to Yhwach, the Hollow essence would follow along since they are merged so strongly and consequence cause fatal consequences within Yhwach, who has no natural defense against the Hollow. Looking forward to coming chapters and seeing how Yhwach will be combated by Ichigo and possible Uryuu.