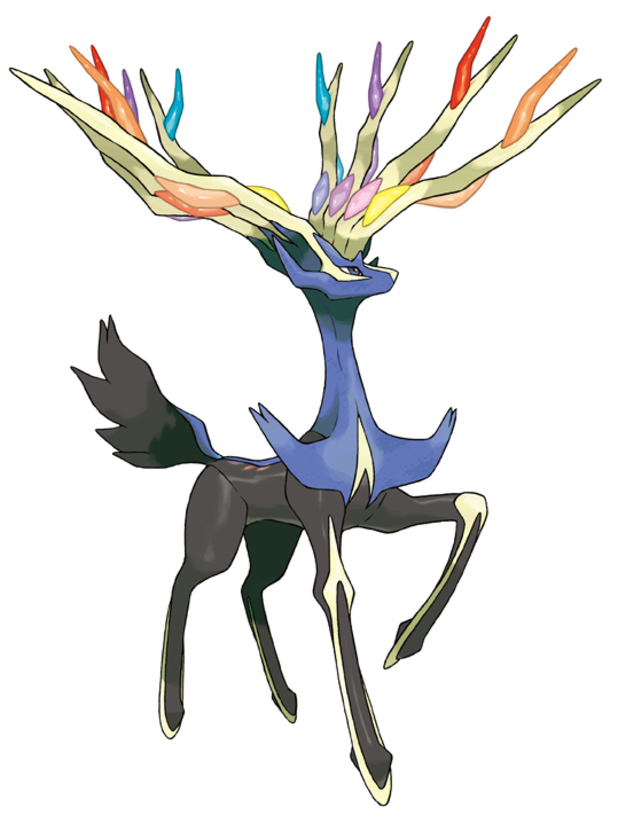 I finally came across this Legendary Pokémon as I worked to stopped Team Flare from accomplishing their questionable goals. I was tempted to use my only Master Ball I had, but I opted against that thought and instead drained Xerneas down into the red and proceeded to capture it with a Great Poké Ball. I am extremely excited I have finally come across the poster face of Pokémon X, been waiting for this encounter since I bought the game. Now that I have it, one of my other Pokémon which I am quite fond of has to be sidelined =( – ended up sidelining my Blaziken for now.

Seems that Lysandre was the head of Team Flare, guess the developers really wanted the player to reach such a conclusion early on by designing his character so fitting for the Team Flare head. Lysandre had intended to use the electricity he stole to power his laboratories and the Poké Balls to capture Pokémon and utilize their life force in powering up a weapon they uncovered.

Three thousand years ago a war raged across Kalos and the King of Kalos who loved his Pokémon ended up losing it through the war. Overcome with overwhelming grief and sorrow, he worked tirelessly to build a machine capable of bringing back his lost Pokémon and ultimately he succeeded in building the machine. At that point, the rage and anger fueling him didn’t subside and overcome with an intense desire for vengeance, he sought to make those who took his beloved Pokémon away from him pay. Changing the device he built to revive his Pokémon into a weapon, he activated it and wiped out most of the lives of humans and Pokémon in Kalos. The story is an incredibly moving one, a truly sad tale built on tragedy and pain.


Three thousand years later and Lysandre, who seeks to bring about a world of peace, plans to reduce the number of humans on the planet by activating the weapon from 3,000 years ago (now located in Geosenge Town) in order to make it easier for people to come to understand how necessary it is for them to change. Rather then try to “save” everyone, he created Team Flare to specify those that needed to be saved and taken along with into the future. Lysandre genuinely did want to save people, but having his hopes and dreams cut down so many times, he chose to take matters into his own hands and do something that was within the realms of what he saw as “possible”. Lysandre utilised the Legendary Pokémon Xerneas (or Yveltal in Pokémon Y) to power the weapon. Xerneas/Yveltal had shown itself in order to prevent other Pokémon from being sacrificed as energy to power the weapon. Thanks to your trainer, Xerneas is able to break free from the weapon and meet you.

The King of Kalos was called AZ, an extremely tall man whom your trainer had met near the beginning of their Pokémon journey. AZ seems incredibly regretful and sorrowful now, the fact that he sincerely ask your trainer and friends to stop Lysandre expresses how remorseful he now is.

Currently Lysandre has used the last remains of power within the weapon to activate it and fire one final short on Geosenge Town – to try to kill your trainer and friends.

I paused the game at that point, so I am looking forward to seeing how things develop from here on. Also what other Legendary Pokémon will I come across =D.