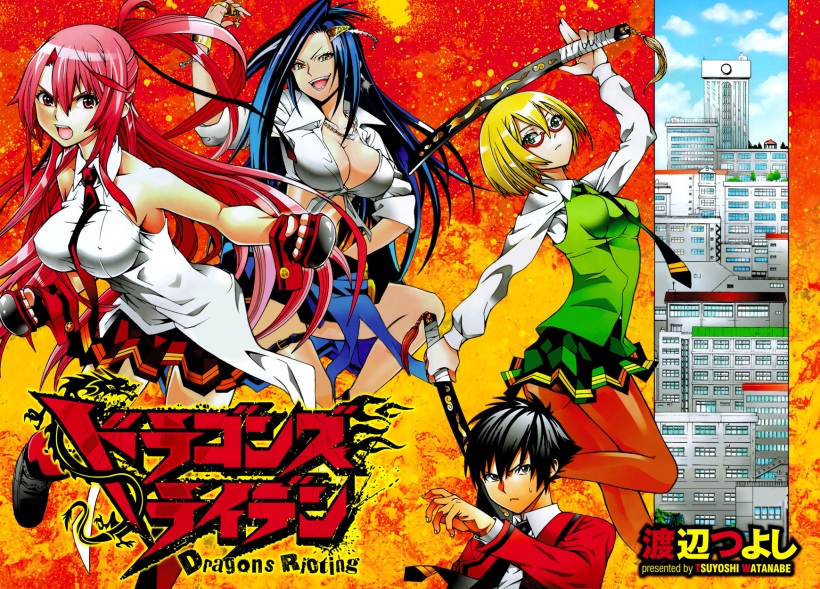 The “war” between “Dragons” ongoing within Nangokuren High School

Dragons Rioting (by Watanabe Tsuyoshi) is a story about a boy and an unusual disease he was born with. The disease triggers a violent reaction within his body whenever he is sexually aroused. In those moments all of his blood gathers at one point effectively straining his heart to dangerous levels. The disease, otherwise known as the ‘Hentai Syndrome’, has no cure and in fear of the boy dying at a young age, his father takes him into the mountains to begin training to help him deal with the hurdles he will face. One way or another, after the boy finishes his father’s training he mistakenly enrolls into a highly girl-populated high school, Nangokuren High School. The boy’s life-threatening daily life begins and on top of dealing with the usual school challenges, the boy ends up in the middle of a war between three factions (led by individuals known as “Dragons”) vying for power within the school.

Dragons Rioting does incorporate elements of ecchi and harem but given how the main character, Rintaro, suffers from a deadly disease, a new dynamic to the genre is brought forward, one that presents the ecchi and harem genre in such an amusing and fun light rather than centrally sexual. Whenever a fanservice scene begins, you find yourself looking forward to the contrasting reaction of Rintaro; whether he will retreat, avoid it completely or handle it in a totally surprising way. The fact Rintaro is a master Martial Artist, his reactions are given further humorous effect when he is capable to reacting in such peculiar ways.

On top of adding substance to scenes, Rinatro’s characterisation also makes him a really lovable main character which ultimately incites the reader to want to see him in more difficult situations. The fact that Rintaro ends up interwoven in the war between the three “Dragons” helps to create the situation needed to challenge Rintaro and flesh him out as well as develop his character and the dangers wrapped around his disease.

The three “Dragons” all seek to obtain complete power within Nangokuren for reasons they reveal through the story. Once Rintaro enters the scene, a deviation between the three-way battle forms and he becomes a piece totally relevant to the three “Dragons” future choices and Nangokuren High School as a whole. Watching Rintaro catch the attention of three “Dragons” and become central to their actions is quite exciting and having the “Dragons” become fleshed out through their interactions with Rintaro makes the story of Dragons Rioting a lot more interesting. Rintaro wasn’t able to makes friends when he younger due to being in the mountains training with his father, so Nangokuren High School is effectively an environment in which Rintaro opens himself up and begins to understand what forming connections with other people is like. 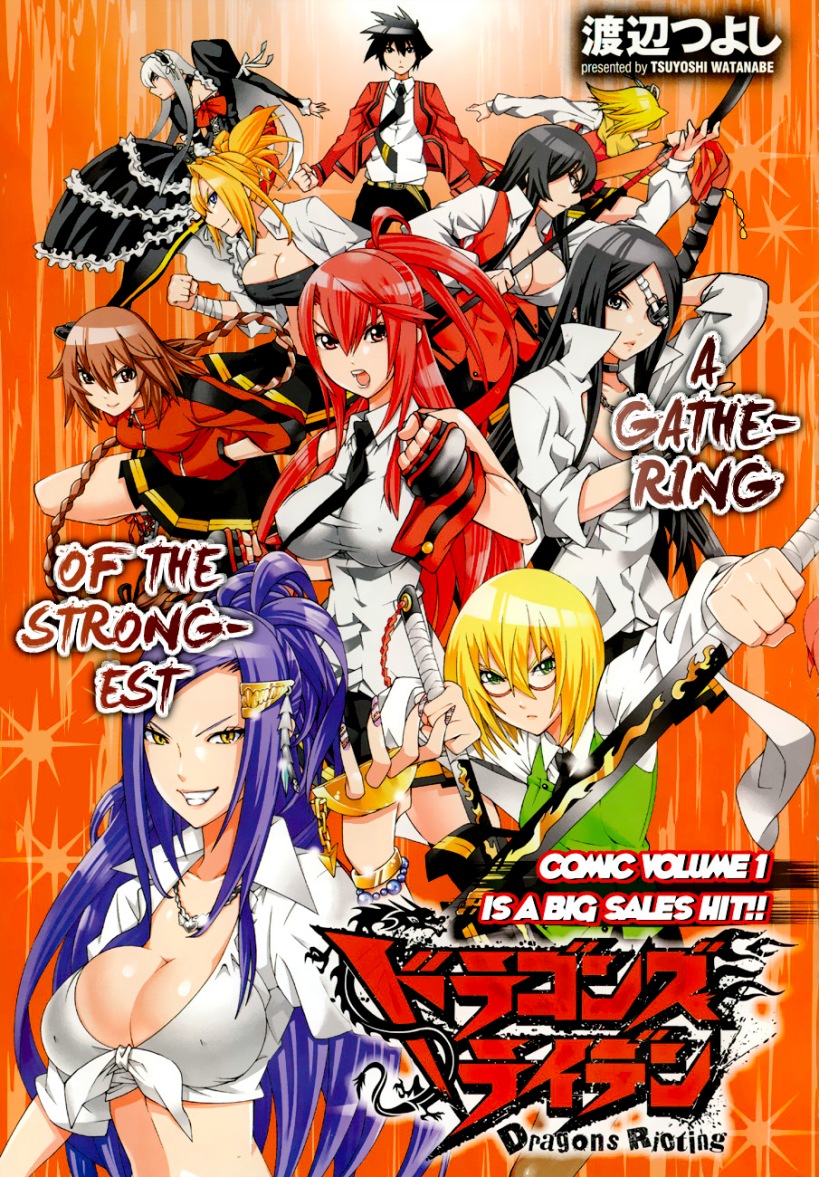 The players within Nangokuren High School

The “Dragons”; first year Ayane, second year Rino and third year Kyouka, all have interesting past which led up to them becoming “Dragons” and the foundation used to sustain their reasons for why they continue to fight as “Dragons”. Out of the three, I find Kyouka to be the most interesting (she definitely is part Saiyan), she has a really interesting past and I just really like her dynamic character and design as well as how she represents power and elegance. Kyouka’s past I feel establishes her character as being quite deep – finding that “something” which sets her world ablaze in colour when all she could see before was a world in black and white. The interactions Kyouka and Rintaro have across the most recent chapters (chapters 10 – 14) showcased sides of their characters we hadn’t seen before and even lit the light on an exciting relationship which could arise. Both Kyouka, as the girl wanting to answer her hearts desire of living life fully and Rintaro, as the boy seeking ‘strength’ to over the disease crippling him, I feel the two of them will be able to progress to an answer the more time they spent together (I’m definitely shipping their relationship – Rintaro x Kyouka).

The artwork is solid and compliments the fun and enjoyable side of manga wonderfully. It also handles the ecchi moments amazingly with its cute and sexy presentation – Watanabe-sensei illustrates the female characters quite spectacularly. The fights for the most part are handled really well, though they could be extended and made more dynamic yet even without that, they are still exciting to see. The double page spreads of the animal/dragon-themed moves and climatic moments are illustrated beautifully and are something to look forward to during the fights. 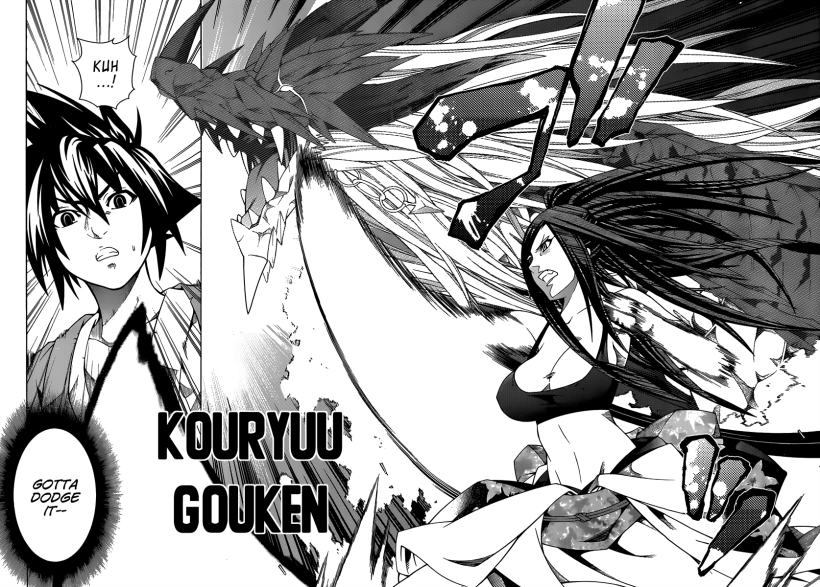 Kyouka really is enchantingly fierce, what a beauty

Overall Dragons Rioting is a unique type of ecchi/harem manga and even though certain generic developments are utilised, the fact that something as distinct as the disease afflicting the main character is used to drive the story, a new and fresh flavour begins to emanate from the genre. More than a story centering around fanservice, Dragons Rioting has the intention of pushing forward a story which is both substantial and enjoyable to read/follow and because of that, this is a manga which stands out within its genre.