Rukia and Renji – colour by TrafaIgarLaw

I find it ridiculously hilarious how the Sternritter, who are made up of Quincy, are talking about balance so boldly and poetically. If they forgot, aren’t they themselves the representatives of imbalancing that balance they talk about so resourcefully? They raided Hueco Mundo and slaughtered who knows how many Hollow to cause an imbalance between worlds which in turn effectively threatened to leave reality in a state of collapse and instability. Hearing Haschwalth prattle on about the scale of balance and equating fortune with misfortune just made my eyes roll so incredibly hard.

I quite enjoyed the conversation Kyouraku and Haschwalth exchanged with other, it oozed maturity and psychological jabs. The complete ambiguity surrounding everything they said only added to the suspense and thrill of their encounter.

Seeing the Sternrriter execute their members who lost wasn’t all that surprising as Yhwach does seem to be that twisted but the fact that it was carried out under the premise of balance was completely shocking. Does Haschwalth’s ability have something to do with balance? If so it would explain why he is so obsessed with it when he is talking. But regardless, seeing a Quincy whose very existence represents a threat to balance talk about restoring balance is just entirely amusing. The reason the Quincy were hunted down 200 years ago was because they were the imbalance to balance, they disrupted the cycle of souls entering Soul Society which caused instability between worlds.

That Mask de Masculine Sternritter…I don’t know if it is just me but I’m not finding his character all that exciting. Sure his ability does intrigue me, but his personality and countless boast, it is starting to become annoying and he has just been around for a chapter and a bit. Still I wonder what the connection between Mask de Masculine and James is, does it function similar to Sajin’s Kokujou Tengen Myouou? With Mask de Masculine being a manifestation of Jame’s ability which only receives damage when the James is harmed. 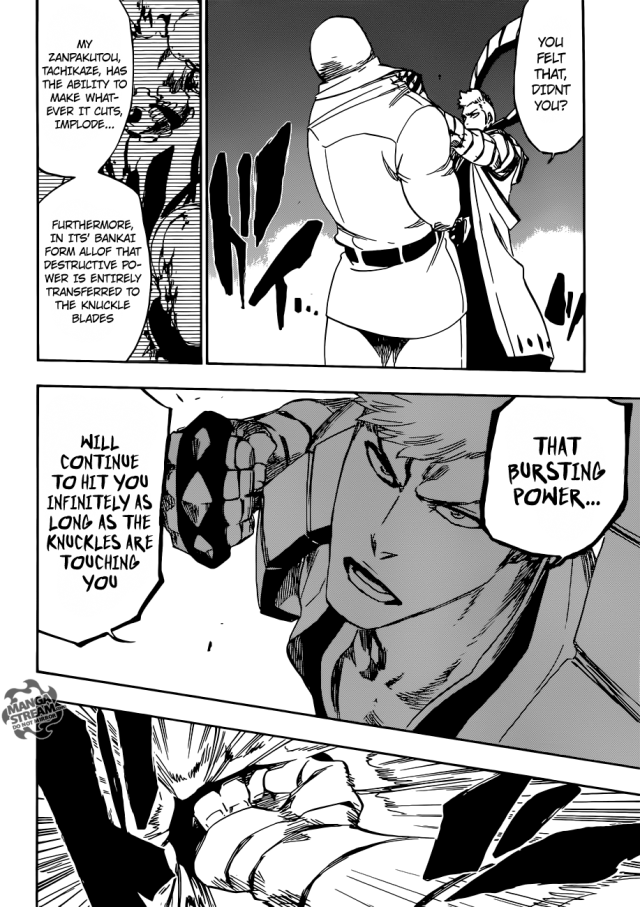 So Kensei, how does your Bankai work again?

Kensei…really? Did he REALLY need to explain to his enemy EXACTLY how his Bankai and abilities work? Ah I don’t get it anymore…why does Kubo-sensei make characters blurt out how their abilities functions to their enemies? Doing so just gives away a massive clue to the weakness of their abilities. All Mask de Masculine needs to do is avoid having the knuckles of Kensei’s Bankai make contact with him. Geez, now I know why two Captains are there, to avoid Kensei having his ass handed to him. Hopefully Love doesn’t reveal how his Bankai or abilities functions…

Was hoping the lieutenants would be this Sternritter’s opponent (Super Star doesn’t really appear to be that awesome), but guess I ended up overestimating Ikkaku, Yumichika and Shuuhei’s capabilities. How sad, those guys were manhandled before they even displayed the fruits of their training. Truly unfortunate. Time to call Haschwalth to tip the scales back to being balanced O.o.

We were teased with pages of Rukia and Renji but haven’t got anything substantial relating to them yet, hopefully we will soon. Looking forward to seeing those two unleash and reveal the power boost they have gotten from their training in the Spirit King Realm.