And so the endless wilderness known as cooking enters the stage ready to explore its reach towards its limits.

Shokugeki no Soma is a story of a boy pursuing the path of cooking and challenging himself so that one day he can surpass his father and continue on the family business – a special-of-the-day shop. Within that simplistic reason the real worth of Shokugeki no Soma is revealed, the story within the story where the curtain rises on the new possibilities of cooking and the pleasures, flavours and textures brought along with it.

Sure some of the techniques and cooking methods used may be stretched and irregular but that’s exactly what is so great about Shokugeki no Soma, to be surprised by the unexpected and be thoroughly entertained by the peculiar cooking spirit and styles the characters possess. The situations which arise and the way they are presented and subsequently handled create addictingly intense scenes and reading. Just like a good dish, it has you wanting more.

And beyond the cooking, the way the dishes are described through the use of metaphors and similes, your tongue and mind are taken on a journey as if it were also tasting and experiencing it. That barrier known as “reality” is struck down by the piercing words engrossing your imagination which utilises familiar concepts you can relate to to express just what the dish being served embodies and “speaks”. You may not be able to physically taste the dishes being served, but thanks to the characters reactions and how they describe the experience, your body too is taken on that journey of reaction. It’s deliciously good. 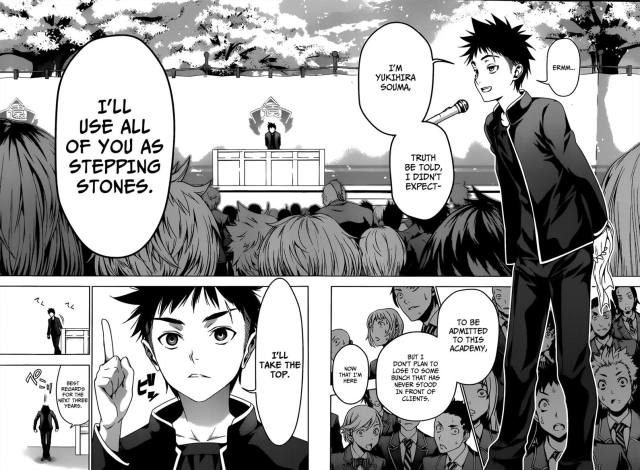 Now that’s how its done!

The main character Yukihira Souma is such a refreshing character for the shounen genre. Unlike the usual shounen formula which has the main character start off lacking “confidence” to allow room for development, here we have Souma completely having confidence oozing out of him. His boldness and non-existence of doubt in himself captures you immediately. And when he reveals he has a humourous and fun side to himself as well, you fall in love with his character. He is talented, he is ambition, he is confident, but the aspect about Souma which triggers you to smile at what he does is his fearlessness of desiring to explore the realms of cooking. Whenever he is challenged, you ready your mind to be prepared for his response.

As the cast of characters expand the dynamics that are produced through their interactions beckons some thrilling feelings and reveal sides of a character that make them all unique. Through the rivalries and friendships, the pains and joys, the seriousness and humour; you find yourself becoming attached to each character. And through the dishes they prepare and serve across their challenges you come to know who that character is. The fact that unique dishes must be thought up for each of the important characters, you can’t help but be impressed at the team behind Shokugeki no Soma – story by Tsukudo Yuuto, art by Saeki Shun and the [food] collaborator Morisaki Yuki.

Shokugeki no Soma’s artwork is sensationally good. Right from the first chapter the art is of high quality and it has been increasing ever since. Saeki Shun is continually out-doing himself especially with how he represents the food/ingredients, the character reactions through the use of their imagination and the sensual nature of food. Each character has a unique design and a unique personality when they enter the realm of cooking which is conveyed characteristically through the art. Ecchi scenes are used to incorporate some fanservice into the manga but they are used so purposefully that it further conveys the nature and “character” of the dish being served.

Another aspect of Shokugeki no Soma, or more in general the cooking genre, that stands out is the ability to expand itself through different types of cuisines. Unlike battle manga or sports manga whose characters are limited by fighting “style” or “position”, cooking stories can turn to the many cuisine styles found throughout the world. When characters are challenged by a particular cuisine style that is different from their own, they can apply themselves into that field of cooking and utilise the skills and knowledge they will learn to create a dish that synergises both the cuisines they know and the cuisine relevant to the challenge to create something spectacularly unique. Cooking doesn’t only focus on “power”, it uses “range” to develop the character’s ability, the range of cuisine. And because of this it avoids having to delve into the realms of “inhuman” abilities to sustain excitement in the story.

Shokugeki no Soma is also an incredibly informative manga. After the food is presented and the characters reactions are conveyed, explanations are given by the characters of how they achieved that particular dish and flavour profile. Methods and ingredients used are detailed as well as the purpose behind the dish and what it hoped to achieve by being eaten. I may not be a chef and know much about cooking but I continually find myself being educated by the ingredients used and cooking done in Shokugeki no Soma.

Shokugeki no Soma is able to blend together the excitement of a shounen story, the charm of lovable characters that grow on you and the magic of cooking which fascinates you all in one amazing manga. It is interesting, informative and incredibly enjoyable, even someone who knows next to nothing about cooking will love the flavour of it. I highly recommend Shokugeki no Soma!

2 Responses to Shokugeki no Soma (Manga)