At its core Ansatsu Kyoushitsu (Assassination Classroom) is about assassinations and teaching and how such a relationship creates an uniquely optimium learning environment for the class focused on during the story. And yeah there’s tentacles.

The story is one involving an unusual super powerful being resembling that of an octopus who claims to have been the reason behind why the moon is missing a large chunk (70%) of itself, rendering it now into a shape of a crescent moon. This unusual being declares that within a years time he will destroy the Earth, just like how he destroyed the moon, but to give humanity hope, he gives them a chance by becoming the homeroom teacher for a specific class of junior high students known as “Class-E”. These students among learning the normal junior high school study curriculum must also polish their skills in assassination to carry out an assassin to kill him, their homeroom teacher, who they name Korosensei (unkillable teacher). The government fearing for what might happen in a years time, offers 10 billion yen to any of the students (or person) able to kill Korosensei.

The story is a strangely interesting one, and while it doesn’t really intensely draw you in at the beginning, after the introductions are done and most of the main cast are introduced you start to see just what the story is actually about and begin to get more into the manga until you find yourself quite enchanted by the tentacles and romance of assassination and teaching. 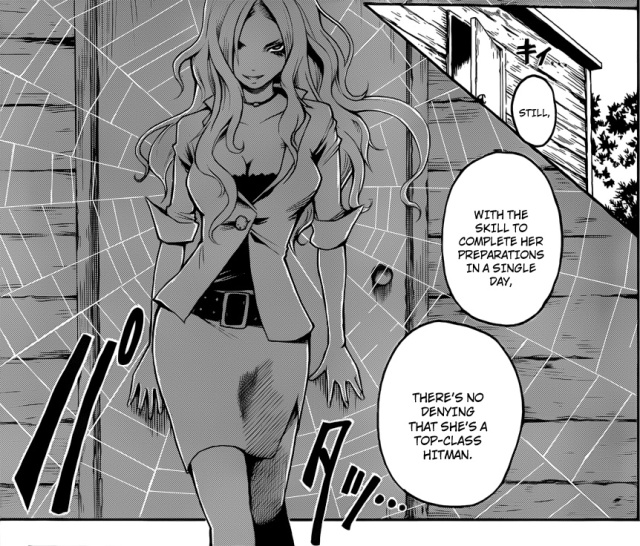 The set-up for the Class-E situation within the school they belong to and the existence of Korosensei as their sensei creates some quite powerful lessons to learn and while it is carried out within a fictional context, the relevance of those lessons does extend beyond the pages being read.

The dynamics which go on between the characters as they try to assassinate Korosensei is extremely amusing and serves as a driving force behind the development of both the students and teachers of Class E. Through a concept so brutally serious and deeply negative as assassination (killing), the way it is delivered and presented portrays it as a story quite spectacular and inspirational, especially with Korosensei embracing his assassins killing intents so lovingly.

Assassination with a smile, =)

It is almost as it you are seeing the skies go pitch black when the sun is beaming fiercely in the sky above you, you understand that killing and entertaining the thought is wrong but here we have a story so driven by the concept of killing that it should be wrong but yet it comes off as something so inspiring and positive, it’s a weird feeling to say the least.

Watching the students grow as they tackle this massive responsibility thrust on them suddenly is where most of the positivity lies. Korosensei is their target, yet he also plays the role of their sensei and what a sensei he is. Accepting their killing intents and furthering them in the art of killing him i.e. assassination, which encapsulates both the lessons of learning how to kill and how to live.

The many elements to Korosensei’s character forces you to take an interest in him which induces you to want to see more of him revealed and explored. The fact that he is some tentacled creature is the first strangely appealing feature of his character, which quite honestly has softened and elevated the image of tentacles I had in my mind before reading Assassinations Classroom. From neutral to actually loving tentacles…I’m shocked myself, who knew tentacles could be presented in such a fantastically grand and entertaining way. Seems like along with the students of Class-E, I was cultivated by Korosensei as well O.o.

Thanks for reading and look out behind you.